The Wych Elm cultivar Ulmus glabra 'Albo-Variegata' was first mentioned by Weston (The Universal Botanist and Nurseryman. 1 : 315) in 1770 as U. glabra var. variegata. [1] An U. campestris latifolia albo-variegataHort. was distributed by the Späth nursery, Berlin, from the 1890s to the 1930s. [2]

Weston described the tree as having leaves striped with white. Späth's cultivar was described in his 1903 and 1930 catalogues as having "large white-marbled leaves". [2]

An elm with white-variegated wych-type leaves is sold in Poland. [3] Three specimens of U. campestris latifolia albo-variegata were supplied by Späth to the Royal Botanic Garden Edinburgh in 1902, and may survive in Edinburgh as it was the practice of the Garden to distribute trees about the city (viz. the Wentworth Elm). [4] 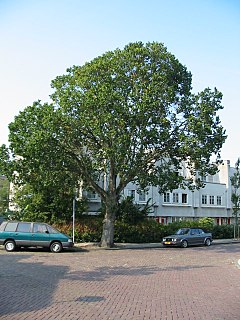 Ulmus 'Exoniensis', the Exeter elm, was discovered near Exeter, England, in 1826, and propagated by the Ford & Please nursery in that city. Traditionally believed to be a cultivar of the Wych Elm U. glabra, its fastigiate shape when young, upward-curving tracery, small samarae and leaves, late leaf-flush and late leaf-fall, taken with its south-west England provenance, suggest a link with the Cornish Elm, which shares these characteristics.

The elm cultivar Ulmus 'Atropurpurea' [:dark purple] was raised from seed at the Späth nursery in Berlin, Germany, circa 1881, as Ulmus montana atropurpurea, and was marketed there till the 1930s, being later classed as a cultivar by Boom. Henry (1913) included it under Ulmus montana cultivars but noted that it was "very similar to and perhaps identical with" Ulmus purpureaHort. At Kew it was renamed U. glabraHuds. 'Atropurpurea', but Späth used U. montana both for wych elm and for some U. × hollandica hybrids, so his name does not necessarily imply a wych elm cultivar. The Hesse Nursery of Weener, Germany, however, which marketed 'Atropurpurea' in the 1950s, listed it in later years as a form of U. glabraHuds.. 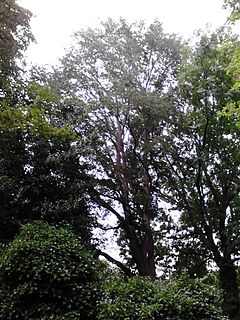 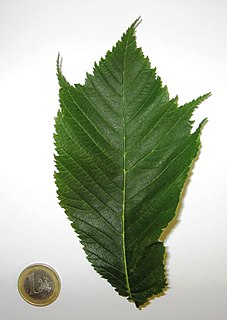 The Wych Elm cultivar Ulmus glabra 'Cornuta', in cultivation before 1845 – Fontaine (1968) gives its provenance as France, 1835 – is a little-known tree, finally identified as a cultivar of U. glabra by Boom in Nederlandse Dendrologie 1: 157, 1959. 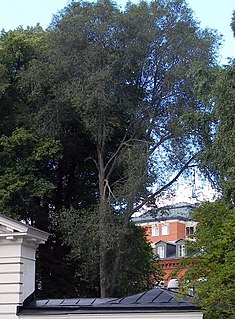 The elm cultivar Ulmus 'Monstrosa' [: "monstrous", "strange"], a shrub-elm with fasciated branching, is believed to have originated in France, where it was first listed by Lavallée in Arboretum Segrezianum (1877) as a form of Field Elm, Ulmus campestris var. monstrosa, but without description. Though its long slender 2 cm petiole is not a feature of wych elm U. glabraHuds., and is even less likely in a shrub form of this species, the wych-cultivar error arose early, perhaps because the Späth nursery of Berlin, using Ulmus montana both for some Ulmus × hollandica cultivars and for wych varieties, listed it c.1890 as Ulmus montana monstrosa. Hartwig in Illustrirtes Gehölzbuch (1892) followed with Ulmus scabra monstrosa, an error repeated by Krüssman (1962) and by Green (1964), with their U. glabraHuds. 'Monstrosa'. 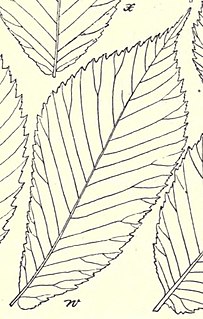 The putative Wych Elm cultivar Ulmus glabra 'Macrophylla' [literally 'long-leaved', though also 'large-leaved'] was first mentioned by Lavallée in 1877 as U. montana var. macrophylla (fastigiata). The Späth nursery of Berlin marketed an U. montana macrophylla in the late 19th and early 20th century; both Späth and the Hesse Nursery of Weener, Germany, supplied it in the 1930s. At that time, Ulmus montana was used both for wych elm cultivars and for hybrid cultivars of the Ulmus × hollandica group.

The Field Elm cultivar Ulmus minor 'Cucullata', the Hooded elm, was listed by Loddiges of Hackney, London, in their catalogue of 1823 as Ulmus campestris cucullata, and later by Loudon in Arboretum et Fruticetum Britannicum (1838), as U. campestris var. cucullata. 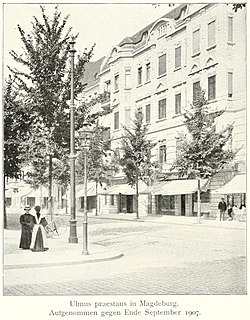 The hybrid elm cultivar Ulmus × hollandica 'Superba' is one of a number of intermediate forms arising from the crossing of the Wych Elm U. glabra with a variety of Field Elm U. minor. Boulger tentatively (1881) and Green more confidently (1964) equated it with a hybrid elm cultivated in the UK by Masters at Canterbury in the early 19th century, known as "Masters' Canterbury Seedling" or simply the Canterbury Elm. Loudon examined a specimen sent by Masters and considered it a hybrid, calling it U. montana glabra major.

The elm cultivar Ulmus 'Argenteo-Marginata' was first mentioned by Deegen in Deutsches Magazin für Garten- und Blumenkund (1879), as Ulmus campestris elegans foliis argenteo-marginatis. An U. campestris fol. argenteo-marginataHort. was distributed by the Späth nursery, Berlin, from the 1890s to the 1930s.

The Field Elm cultivar Ulmus minor 'Viminalis Pulverulenta' (:'powdery'), also known as 'Viminalis Variegata', a variegated form of U. minor 'Viminalis', was first mentioned by Dieck, in 1885 as U. scabra viminalis pulverulentaHort., but without description. Nursery, arboretum, and herbarium specimens confirm that this cultivar was sometimes regarded as synonymous with U. minor 'Viminalis Marginata', first listed in 1864, which is variegated mostly on the leaf margin. It is likely, however, that 'Pulverulenta' was the U. 'Viminalis Variegata', Variegated Twiggy-branched elm, that was listed and described by John Frederick Wood, F.H.S., in The Midland Florist and Suburban Horticulturist 1847 and 1851, pre-dating both Kirchner and Dieck. Wood did not specify the nature of the variegation. 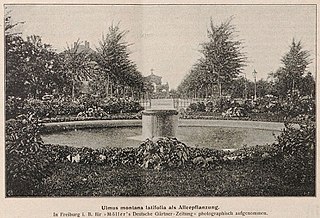 The putative Wych Elm cultivar Ulmus glabra 'Latifolia' was identified in Audibert's Tonelle (1817) as U. campestrisLinn. [ = U. glabraHuds.] latifolia. The tree is reputed to have originated circa 1750 in or around Mechelen, and to have been widely planted throughout Belgium. A 1912 herbarium specimen from Oudenbosch, however, shows a hybrid leaf labelled Ulmus hollandica latifolia.

The Wych Elm cultivar Ulmus glabra 'Gigantea' was listed as U. montana var. giganteaHort. by Kirchner (1864). An U. montana gigantea was distributed by the Späth nursery, Berlin, in the 1890s and early 1900s. It did not appear in Späth's 1903 catalogue. A specimen at Kew was judged by Henry to be "not distinct enough to deserve a special name". Both Späth and the Hesse Nursery of Weener, Germany, supplied it in the 1930s. 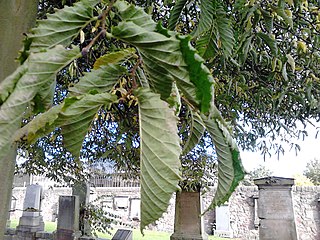 The Wych Elm cultivar Ulmus glabra 'Concavaefolia', a form with up-curling leaves, was listed in Beissner's Handbuch der Laubholz-Benennung (1903) as Ulmus montana cucullataHort. [:'hooded', the leaf], a synonym of the Ulmus scabraMill. [:glabraHuds.] var. concavaefolia of herbarium specimens. An Ulmus campestris cucullata, of uncertain species, had appeared in Loddiges' 1823 list, but Loudon's brief description (1838) of concave- and hooded-leaved elms was insufficient for later botanists to distinguish them. The earliest unambiguous description appears to be that of Petzold and Kirchner in Arboretum Muscaviense (1864).