DSC Arminia Bielefeld, or just Arminia, is a German sports club from Bielefeld, North Rhine-Westphalia. Arminia offers the sports of football, field hockey, figure skating and cue sports. The club has 12,000 members and the club colours are black, white and blue. Arminia's name derives from the Cheruscan chieftain Arminius, who defeated a Roman army in the Battle of the Teutoburg Forest.

The 1996–97 Bundesliga was the 34th season of the Bundesliga, Germany's premier football league. It began on 16 August 1996 and ended on 31 May 1997. Borussia Dortmund were the defending champions.

The 1984–85 Bundesliga was the 22nd season of the Bundesliga, the premier football league in West Germany. It began on 24 August 1984 and ended on 8 June 1985. VfB Stuttgart were the defending champions.

The 1980–81 Bundesliga was the 18th season of the Bundesliga, West Germany's premier football league. It began on 15 August 1980 and ended on 13 June 1981. Bayern Munich were the defending champions.

The 1979–80 Bundesliga was the 17th season of the Bundesliga, West Germany's premier football league. It began on 11 August 1979 and ended on 31 May 1980. Hamburger SV were the defending champions.

Artur Wichniarek is a retired Polish footballer who played as a striker. 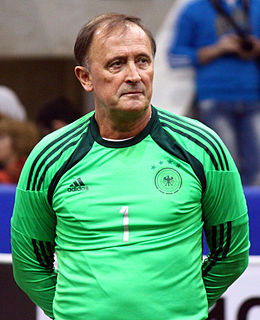 Dieter Burdenski is a German former professional footballer who played as a goalkeeper.

The 1979–80 2. Bundesliga season was the sixth season of the 2. Bundesliga, the second tier of the German football league system. It was played in two regional divisions, Nord and Süd.

Sven Schipplock is a German footballer who plays as a striker for Arminia Bielefeld.

Simon Terodde is a German professional footballer who currently plays as a striker for 1. FC Köln.

Wolfgang Kneib is a retired German football player. He spent eight seasons in the Bundesliga with Borussia Mönchengladbach and Arminia Bielefeld. He scored two goals for Arminia from penalty kicks.

The Bundesliga scandal refers to the malicious, for-profit manipulation of games in the 1970–71 German football championship season.