Ulrich Förstermann (born 4 April 1955) is a German physician and pharmacologist.

As of April 2013, Ulrich Förstermann holds the position of Chief Scientific Officer of the Johannes Gutenberg University Medical Center, Mainz, Germany, and is Dean of the Faculty of Medicine. [1] From 2009 - 2013 he was Vice President for Research of the Johannes Gutenberg University, Mainz, Germany. [2] Förstermann is also Professor in the Department of Pharmacology Johannes Gutenberg University of Mainz. [3] He accepted the Chair of Pharmacology in 1993 after declining an equivalent offer of the Johann Wolfgang Goethe University in Frankfurt, Germany. From 1989 to 1993 Förstermann worked at Abbott Laboratories, Abbott Park, Illinois, USA (with Nobel Laureate Ferid Murad). At the same time he held an Adjunct Professor of Pharmacology appointment at Northwestern University, Chicago, Illinois. During the first two years, his stay in the US was supported by a Heisenberg Scholarship from the Deutsche Forschungsgemeinschaft (German Research Council), Bonn, Germany. From 1991-1993 Förstermann took over Abbott’s Vascular Biology Project as the Project Director. Previously (1984–1989), Förstermann worked at the Department of Clinical Pharmacology, Hannover Medical School, Hannover, Germany, first as an Assistant Professor and later (after obtaining his German lecturing qualification, the “Habilitation”) as an Associate Professor of Pharmacology and Assistant Medical Director. Förstermann holds an MD/PhD (pharmacology) degree from Albert Ludwig University of Freiburg, Freiburg, Germany, 1980. He also spent his early post-doctoral years (with Georg Hertting) at the Department of Pharmacology of the Albert Ludwig University of Freiburg.

Förstermann is the recipient of several awards and honors including the Goedecke/Warner Lambert Research Award from the Albert Ludwig University of Freiburg (1979); the Fritz Kuelz Award in Pharmacology from the German Society of Pharmacology and Toxicology (DGPT, 1986) [3]; the Rudolph Schoen Award from the Hannover Medical School (1989); a Heisenberg Scholarship from the Deutsche Forschungsgemeinschaft (German Research Council), Bonn, Germany (1989–1993, returned prematurely in 1991). In 2014, Förstermann was awarded the Rodolfo Paoletti Medal for Distinction in European Pharmacology by EPHAR. [11] In 2017 he received the Ariëns Award of the Nederlandse Vereniging voor Farmacologie – Dutch Pharmacological Society for his groundbreaking research in the area of molecular pharmacology., [12] [13] 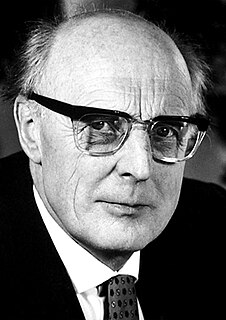 The Johannes Gutenberg University Mainz is a public research university in Mainz, Rhineland Palatinate, Germany, named after the printer Johannes Gutenberg since 1946. With approximately 32,000 students (2018) in about 100 schools and clinics, it is among the largest universities in Germany. Starting on 1 January 2005 the university was reorganized into 11 faculties of study.

The German Research Foundation is a German research funding organization, which functions as a self-governing institution for the promotion of science and research in the Federal Republic of Germany. In 2019, the DFG had a funding budget of €3.3 billion.

Dieter Lüst is a German physicist, full professor for mathematical physics at the Ludwig Maximilian University of Munich since 2004 and a director of the Max Planck Institute for Physics in Munich. His research focusses on string theory. In 2000, he received the Gottfried Wilhelm Leibniz Prize of the Deutsche Forschungsgemeinschaft, which is the highest honour awarded in German research.

Peter Herbert Jensen was a German experimental nuclear physicist. During World War II, he worked on the German nuclear energy project, known as the Uranverein. After the war, he was a department director in the high-voltage section of the Max Planck Institute for Chemistry, in Mainz, and a supernumerary professor at the University of Mainz.

Johannes Wilhelm Heinrich Juilfs, also known by the alias Mathias Jules, was a German theoretical and experimental physicist. He was a member of the Sturmabteilung (SA) and then, in 1933, of the Schutzstaffel (SS). Prior to World War II, he was one of three SS staff physicists who investigated the physicist Werner Heisenberg during the Heisenberg Affair, instigated, in part, by the ideological deutsche Physik movement. During the war, he worked as a theoretical physics assistant at the Kaiser Wilhelm Institute for Physics. During the denazification process after World War II, he was banned from working as a civil servant in academia. For a few years, he worked as a school principal, and then he took a job as a physicist in the textile industry. With the help of Heisenberg and the Minister of Lower Saxony, he was able to become a full professor at the Leibniz University Hannover.

The Federation of European Pharmacological Societies (EPHAR) is a non-profit voluntary association established to advance research and education in the science of pharmacology and to promote co-operation between national/regional pharmacological societies in Europe and surrounding countries. It is an umbrella organization of currently 27 national societies for pharmacology and represents over 10,000 individual pharmacologists in Europe. Moreover it seeks to co-operate with other international organizations, especially the International Union of Basic and Clinical Pharmacology (IUPHAR) of which EPHAR is an associate member. 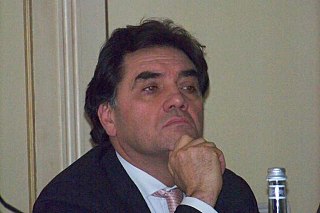 Filippo Drago is an Italian pharmacologist, neurologist and psychiatrist.

Paul Trendelenburg was a German pharmacologist.

Georg Wöhrle is a German Classical philologist and medical historian.

Rudolf Albert Martin Boehm (Böhm) was a German pharmacologist, known for his work in the field of experimental pharmacology.

Bernd Kaina, born on January 7, 1950 in Drewitz, is a German biologist and toxicologist. His research is devoted to DNA damage and repair, DNA damage response, genotoxic signaling and cell death induced by carcinogenic DNA damaging insults.

Gerd Heusch is a German physician and physiologist, professor and chair of the Institute for Pathophysiology at the University of Essen Medical School.

Albrecht Riethmüller is a German musicologist.

Sucharit Bhakdi is a retired Thai-German microbiologist. In 2020 Bhakdi became a prominent exponent of ideas about the coronavirus pandemic that ran counter to the scientific consensus.

Özlem Türeci is a German physician, scientist and entrepreneur. She was the co-founder of the German biotechnology company BioNTech in 2008, which developed the first approved messenger RNA-based vaccine against COVID-19 in 2020. Türeci has served as BioNTech's chief medical officer since 2018. She was founder and CEO of Ganymed Pharmaceuticals from 2008 to 2016. She is also a private lecturer at Johannes Gutenberg University in Mainz, Germany.