Ulrika Eleonora Strömfelt (1724–5 April 1780), was a politically active Swedish noble and courtier. She is known for her part in the attempted Coup d'état of queen Louisa Ulrika in 1756.

Ulrika Strömfelt was the daughter of riksråd count Johan Carl Strömfelt and the överhovmästarinna and royal governess Hedvig Elisabet Wrangel. In 1739, she became hovfröken (maid of honor) to Ulrika Eleonora, Queen of Sweden. In 1744, she was made maid of honor to the new crown princess, Louisa Ulrika of Prussia. She and her sister Agneta Strömfelt belonged to the first circle of courtiers appointed to Louisa Ulrika after her arrival in Sweden together with Cathérine Charlotte De la Gardie, Henrika Juliana von Liewen and Charlotta Sparre. In 1748, she was promoted to the position of kammarfröken (Chief Maid of honor) after Henrika Juliana von Liewen departure from court. She was apparently well liked by Louisa Ulrika, and was often given the task to read to her from French works. [1]

In 1756, Queen Louisa Ulrika planned a coup d'état to depose the parliamentary system of the Age of liberty with a restoration of an absolute monarchy. To finance the coup, Louisa Ulrika removed the diamonds from the queens' crown, replaced them with crystals, and pawned the diamonds in Berlin in Prussia to finance her coup. Ulrika Strömfelt, however, was a supporter of the Hats (party) and not in favor of a restored absolute monarchy. According to unconfirmed tradition, Ulrika Strömfelt informed the Riksdag that part of the crown jewels was missing and pawned in Germany. [2] This information led the government to demand an inventory of the crown jewels, which initiated the exposure and failure of the Coup of 1756. A different source claims that it Ulrika Strömfelt informed the foreign office of the Riksdag of the secret correspondence between the Queen and her brother, Frederick the Great. [3] Either way, this led to the exposure of the coup. As a recognition of the act, she was awarded a pension of 2.000 riksdaler in silver and the title "Ständernas dotter" (The Daughter of the Parliament) by the Riksdag. [4]

After the failed coup, she lost the confidence of the Queen, and left court. She was, however, not dismissed, but asked herself to be relieved of her position, officially because of health reasons. [5] That a maid of honor left her position and applied for a pension from the foreign branch office of the Riksdag was unique. [6] Her application was granted, and the pension granted her amounted to double as much as was what usually granted the widow of a riksråd. [7]

The Queen stated that the reason Strömfelt left court was that she was a friend of Carl Gustaf Tessin and "all the notables of the Hat's Party, who, under the very eyes of the Queen, held rendez-vous at the parlor of this Chief Maid of Honor". [8] According to Count Axel von Fersen the Elder, she "was now forced to leave court because of the plots of others", [9] and he pointed out the Queens new favorite Ulrika Eleonora von Düben as responsible: [10] von Düben was promoted to the post of Chief Maid of Honor after Strömfelt.

In 1756, the year she left court, Ulrika Strömfelt married the Over-Governor of Stockholm baron Carl Sparre. The marriage is described as happy despite the constant infidelity of her spouse. In 1777, she returned to court and succeeded Anna Maria Hjärne as Överhovmästarinna (Chief lady in waiting or Mistress of the Robes) to the new Queen, Sophia Magdalena of Denmark with Charlotta Sparre as her deputy, a post she retained until her death.

Ulrika Strömfelt has been said to have a "peculiar position" in the diaries and memoirs of the time, because there are no negative remarks about her personality and character, and she is unanimously described as respectable, sensible and as an ideal of contemporary femininity. 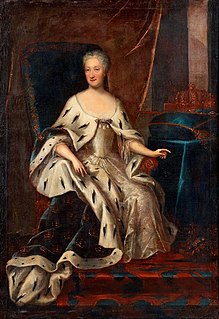 Ulrika Eleonora or Ulrica Eleanor, known as Ulrika Eleonora the Younger, was Queen of Sweden, reigning in her own right from 5 December 1718 until her abdication on 29 February 1720 in favour of her husband King Frederick, and then as his consort until her death. 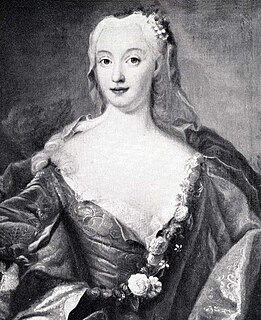 Hedvig Ulrika Taube, also Countess von Hessenstein was a Swedish courtier and countess, a Holy Roman countess of the Empire, and royal mistress to king Frederick I of Sweden from 1731 to 1744. She is regarded as the only official royal mistress in Swedish history.

Louisa Ulrika of Prussia was Queen of Sweden from 1751 to 1771 as the consort of King Adolf Frederick. She was queen mother during the reign of King Gustav III.

Henrika Juliana von Liewen was a Swedish noble, socialite and lady-in-waiting, politically active on behalf of the Hats (party) during the Age of liberty.

Ulrika "Ulla" Eleonora von Höpken, later von Wright, née von Fersen, was a Swedish countess and courtier. She is also famous in history as one of "the three graces" of the Gustavian age; three ladies-in-waiting immortalized in the poem Gracernas döpelse by Johan Henric Kellgren, and known profiles of the epoch. She was a leading socialite and trendsetter in contemporary Sweden, and one of the best known profiles of the Gustavian age.

Ulrika Eleonora von Düben, was a Swedish Courtier, favourite of the queen of Sweden, Louisa Ulrika of Prussia. 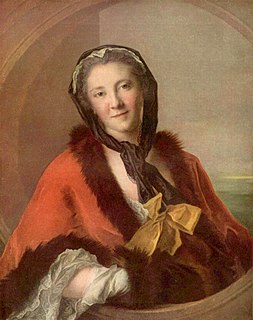 Lovisa "Louise" Augusta Meijerfeldtnée Sparre af Sundby, was a Swedish noble and courtier. She is famous in history as one of "the three graces" of the Gustavian age; three ladies-in-waiting immortalized in the poem Gracernas döpelse by Johan Henric Kellgren, and known profiles of the epoch.

Ulrica "Ulla" Elisabeth von Liewen, was a Swedish courtier and baroness. She was at one point the royal mistress of Adolf Frederick, King of Sweden and are known as the likely mother of Lolotte Forssberg.

Hedvig Elisabet Strömfelt, née Wrangel, was a Swedish courtier. She served as överhovmästarinna to two queens of Sweden, Ulrika Eleonora of Sweden and Louisa Ulrika of Prussia, and as Royal Governess to the royal children. Gustav III of Sweden refers to her with affection and admiration in his writings.

Catharina Juliana "Julie" Eckerman (1765–1800), was a Swedish courtesan and spy. She is most known as the kept lover of riksråd count Carl Sparre, a relationship which attracted attention and was used by the opposition of Sparre during his political career.

Events from the year 1756 in Sweden 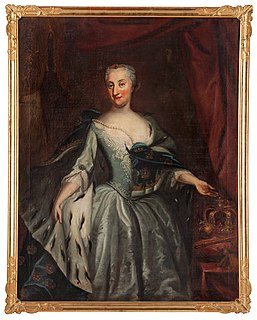 Events from the year 1719 in Sweden

The Coup of 1756 was an attempted coup d'état planned by Queen Louisa Ulrika of Sweden to abolish the rule of the Riksdag of the Estates and reinstate absolute monarchy in Sweden. The attempted coup was exposed and subdued in 1756 shortly before it was due to be put in action. It caused a rift between the royal house and the parliament. 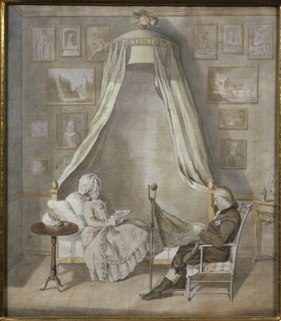 Brita Margaretha Horn, was a Swedish countess and courtier. She is known for being the love interest of Charles XIII of Sweden from 1765 to 1771, during which time Charles' wish to marry her was given political significance and used by the Caps and Hats parties during the Age of Liberty. She is also known for her correspondence with her spouse from 1775 to 1791, which has been partially published.

Ulrica Catharina Stromberg (1710-1777) was a Swedish courtier; överhovmästarinna to the queen of Sweden, Louisa Ulrika of Prussia, from 1754 to 1761.

Hedvig Sofia von Rosen, née Stenbock was a Swedish countess and courtier. She was the överhovmästarinna of the future Gustav IV Adolf of Sweden in 1778-1781, and for his brother Prince Carl Gustav, Duke of Småland in 1782-1783.