Ulsan (Korean pronunciation:  [uɭ.s͈an] ), officially the Ulsan Metropolitan City is South Korea's seventh-largest metropolitan city and the eighth-largest city overall, with a population of over 1.1 million inhabitants. [1] It is located in the south-east of the country, neighboring Busan to the south and facing Gyeongju to the north.

Ulsan is divided into four gu (districts) and one gun (county):

Stone tools found at the Mugeo-dong Ok-hyeon archaeological site indicates that Ulsan was inhabited by humans at least as early as the Paleolithic Era. Other findings indicated human inhabitation in the Neolithic Era. Ulsan also contains a substantial number of town remains from the Bronze Age. [5] During the Jinhan confederacy, Ulsan was a site of iron mining and production. [6] In the Later Silla period, Ulsan served as an important port for the economic hub of Gyeongju, and likely saw the import of luxury Persian goods such as silver, glass, and peacock tails. [7]

Records from the Joseon Dynasty show that Ulsan was developed as a shipbuilding site as early as 1642. [8]

As the centre of the Ulsan Industrial District, the city is the corporate base of the multinational Hyundai conglomerate. Up to 1962, Ulsan operated as a fishing port and market centre. As part of South Korea's first five-year economic plan, Ulsan became an open port. Additionally, the government designated Ulsan as a Special Industrial District, [9] which encouraged development of major industrial plants and factories: an oil refinery, fertilizer plants, automobile production, and heavy industries were developed here. The shipbuilding port Bangeojin was annexed by the city in 1962.

Hyundai Group founded Hyundai Heavy Industries in Ulsan in 1973, which effectively turned the city into a company town and drew a large influx of workers into the city. [10] The company's importance to the city can be seen in its name's omnipresence, with a highway named after Hyundai's founder, and the hospital, school, theater, as well as many restaurants and department stores bearing the Hyundai name. [11]

Amid a global downturn in shipbuilding, Hyundai Heavy Industries sold $1 billion of assets and laid off large numbers of employees in 2016. [12] The company borrowed money from the state-run Korea Development Bank in order to purchase Daewoo Shipbuilding & Marine Engineering, forming Korea Shipbuilding & Offshore Engineering, with plans to move corporate headquarters to Seoul. [13] Some view this downturn as an indicator of South Korea's over-reliance on chaebols, and fear that a period of deindustrialization for Ulsan mirroring the United States' Rust Belt could be on the horizon. [14]

Ulsan is the home of the world's largest automobile assembly plant of 300,000 annual capacity 5 assembly plants, proving ground and in-house peers, operated by Hyundai Motors started 50,000 capacity in 1968 now 30 times expansion of massive motor top complex in the world with own export piers with logistics competitiveness. [2] Its integrated design of related functions was inspired by the Ford River Rouge Complex in Dearborn, Michigan.

The city transport department plans to build a light-rail line. The public transportation system is as good as any other major Korean city. The bus system shows a specific ETA at most bus stops. [21]

Ulsan Airport, constructed in 1970 and expanded in 1997, has more than 20 flights per day to and from Seoul's Gimpo International Airport and 4 flights per week to and from Jeju International Airport. In November 2010, Korea's high-speed train network, the KTX, was extended to Ulsan. [22] This provides a high-speed link to Seoul, with a running time of just over 2 hours. The new KTX station (Ulsan Station) is in nearby Eonyang, with a series of express buses (5001-5005), as well as some city buses serving the new station. [23] The original city station has been renamed Taehwa River Station. [22]

The city hosts the K League 1 football club Ulsan Hyundai FC. After the 2002 FIFA World Cup, they relocated from their former stadium in Jung-gu, which is now a municipal ground, to the Munsu Stadium, which hosted several matches during the 2002 World Cup. The club have been crowned champions of Asia twice, winning the AFC Champions League in 2012 and 2020. Ulsan was home to another football team, Ulsan Hyundai Mipo Dolphin FC, which played in the Korea National League until 2016, when it was dissolved.

It is also home to the University of Ulsan and its sports programs. Ulsan also hosts Korean Basketball League team Ulsan Hyundai Mobis Phoebus. Their home ground is Dongchun Gymnasium, which located in jung-gu ulsan. [24]

Ulsan has a monsoon-influenced humid subtropical climate (Köppen Cfa/Cwa), with cold but dry winters, and hot, humid summers. Monthly means range from 2.0 °C (35.6 °F) in January to 25.9 °C (78.6 °F) in August, with diurnal temperature ranges generally low. Its location on the Korean peninsula results in a seasonal lag. The warmest days occur in August and averaging very near 30 °C (86 °F). Precipitation is relatively low in the winter months, but there is high rainfall from April to September.

There are seven tall mountains (Gajisan, Sinbulsan, Ganwolsan, Cheonhwangsan, Yeongchuksan, Goheonsan, Jaeyaksan) over 1,000m above sea level. Sinbulsan (MT.) Ridge, where grasses turn silver in autumn, is one of the best sights to see in the Yeongnam Alps. Eoksae festival is held every early October in Ganwoljae, which is best known for its colony of silver grass.

Korea's largest traditional folk Onggi (earthware) village is Oegosan. The traditional Onggi (earthware) manufacturing process is carried on here and is open to tourists, including Onggi workshops and kilns. The Ulsan Onggi museum offers a variety of information related to Onggi and displays a diversity of this earthware.

As the only whale museum in Korea, Jangsaengpo whale museum collects, maintains and displays whaling-related artifacts. They have become more rare since 1986, when whaling was internationally prohibited in order to protect the species. The museum provides a variety of information related to whales and marine ecosystems; it is a space for education, research and experience. Whale cruises depart from Jangsaengpo port.

Ulsan has beautiful beaches (Jinha, Ilsan). Daewangam Park features a lush, hundred-year-old pine forest. Ganjeolgot Cape is noted as the first place to see the sunrise from the Korean peninsula. A sunrise festival is held every New Year's Day. 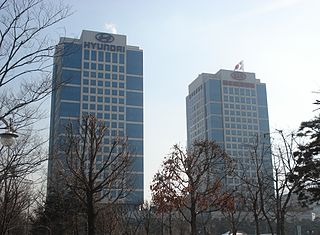 The Hyundai Motor Group is a South Korean chaebol headquartered in Seoul, South Korea. The largest member of the chaebol, Hyundai Motor Company, has a controlling stake in Kia Corporation, and they are the largest and second largest car manufacturers in the country respectively.

Ulsan Hyundai FC is a South Korean professional football club based in Ulsan, owned by the South Korean corporation Hyundai Heavy Industries. Established on 6 December 1983, they joined the K League in 1984 as Hyundai Horang-i. The home ground of the team is Ulsan Munsu Football Stadium.

Göd is a small city in Pest County, Hungary.

The Southeastern Maritime Industrial Region, centered on the harbor cities of Busan and Ulsan, is the Republic of Korea's second largest metropolitan area in terms of population and is the second-most developed region as well. It is also an industrial region for shipbuilding, international trade, and heavy industries, such as car making and chemical producing.

The Hyundai Galloper, also known as the Galloper Exceed, Galloper Innovation, Mitsubishi Galloper or Asia Galloper, is a full-size SUV manufactured by the South Korean manufacturer Hyundai from 1991 to 2004. It was a rebadged first and second generation Mitsubishi Pajero and was assembled at the Hyundai Precision Industry, Co. Ltd. factory in the City of Ulsan's Buk-gu, Yeompo-dong neighborhood until July 31, 1999, when Hyundai Motor Company took over the plant and production. It is almost identical to the Mitsubishi Pajero, a five-passenger vehicle with additional seating for 2 in the back, increasing its capacity to a full seven passenger vehicle. It was available with a 3-door body on a short wheelbase for the Galloper 4WD and Galloper Innovation 4WD models or 5-door body on long wheelbase for the Galloper I/II Exceed models.

Hyundai Mobis is a public South Korean car parts company. Founded as Hyundai Precision & Industries Corporation in 1977, the company forms the "parts and service" arm for the South Korean automakers Hyundai Motor Company, Genesis Motors and Kia Motors. As of 2014, it was the "world's No. 6 automotive supplier."

Hyundai Hysco, or HYSCO is a steel company of Hyundai Motor Group, established in 1975, and headquartered in Ulsan, South Korea. They are a manufacturer of automotive steel sheet products and various steel pipes. Its corporate office is located in Seoul, and it also operates in Ulsan in South Korea with operations worldwide. Currently, Hyundai Hysco operates a steel pipe facility in Korea, eleven overseas processing centers, and three overseas offices internationally.

Samsung Heavy Industries Co., Ltd. is one of the largest shipbuilders in the world and one of the "Big Three" shipbuilders of South Korea. Geoje is one of the largest shipyards in the world, having 3 dry docks and 5 floating docks. A core subsidiary of the Samsung Group, South Korea's largest conglomerate, SHI's main focus is on the engineering, procurement, construction, commissioning and the delivery of: transportation ships for the commercial industry, topsides modules, drilling and floating production units for the oil and gas sector, gantry cranes for fabrication yards, digital instrumentation and control devices for ships, and other construction and engineering services. 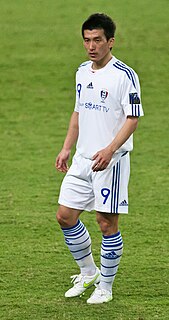 Oh Jang-Eun is a football player from South Korea. He was selected to play for Asian Cup 2007, replacing Kim Nam-Il after his injury.

The 2011 season was Ulsan Hyundai FC's twenty-eighth season in the K-League in South Korea. Ulsan Hyundai FC will be competing in K-League, League Cup and Korean FA Cup.

The 2011 season was Pohang Steelers's twenty-ninth season in the K-League in South Korea. Pohang Steelers will be competing in K-League, League Cup and Korean FA Cup.

Ulsan National Institute of Science and Technology, simply referred to as UNIST, is one of the four public universities in South Korea which are dedicated to research in science and technology, along with KAIST, GIST, and DGIST. UNIST was founded in 2007 in response to growing demand for higher education in the Korean industrial capital of Ulsan, where world-renowned automotive, shipbuilding, petrochemical, and secondary cells industries are clustered. At the time of its foundation, UNIST was known for being the first national university in South Korea to be incorporated and thus administered by an independent board of trustees despite being funded by the central government.

The 2012 Korean FA Cup, known as the Hana Bank FA Cup for sponsorship reasons, was the 17th edition of Korean FA Cup. 2012 KFA Cup will begin on 17 March 2011. The cup winner were guaranteed a place in the 2013 AFC Champions League. 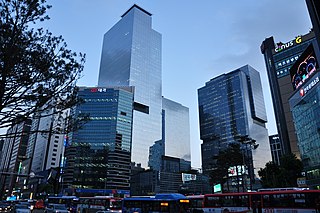 The Samsung Group is a South Korean multinational manufacturing conglomerate headquartered in Samsung Town, Seoul, South Korea. It comprises numerous affiliated businesses, most of them united under the Samsung brand, and is the largest South Korean chaebol. As of 2020, Samsung has the 8th highest global brand value. 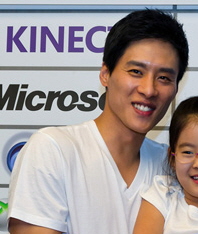