Ultra-high temperature processing (UHT), ultra-heat treatment, or ultra-pasteurization [1] is a food processing technology that almost sterilizes liquid food by heating it above 135 °C (275 °F) – the temperature required to kill many bacterial endospores – for 2 to 5 seconds. [2] UHT is most commonly used in milk production, but the process is also used for fruit juices, cream, soy milk, yogurt, wine, soups, honey, and stews. [3] UHT milk was first developed in the 1960s and became generally available for consumption in the 1970s. [4]

The heat used during the UHT process can cause Maillard browning and change the taste and smell of dairy products. [5] An alternative process is flash pasteurization, in which the milk is heated to 72 °C (162 °F) for at least 15 seconds.

UHT milk packaged in a sterile container has a typical unrefrigerated shelf life of six to nine months. In contrast, flash pasteurized milk has a shelf life of about two weeks from processing, or about one week from being put on sale. A significant percentage of milk sold in the US as organic food is UHT treated. [6]

The most commonly applied technique to provide a safe and shelf-stable milk is heat treatment. The first system involving indirect heating with continuous flow (125 °C [257 °F] for 6 min) was manufactured in 1893. In 1912, a continuous-flow, direct-heating method of mixing steam with milk at temperatures of 130 to 140 °C (266 to 284 °F) was patented. However, without commercially available aseptic packaging systems to pack and store the product, such technology was not very useful in itself, and further development was stalled until the 1950s. In 1953, APV pioneered a steam injection technology, involving direct injection of steam through a specially designed nozzle which raises the product temperature instantly, under brand name Uperiser; milk was packaged in sterile cans. In the 1960s APV launched the first commercial steam infusion system under the Palarisator brand name. [7] [8]

In Sweden, Tetra Pak launched tetrahedral paperboard cartons in 1952. They made a commercial breakthrough in the 1960s, after technological advances, combining carton assembling and aseptic packaging technologies, followed by international expansion. In aseptic processing, the product and the package are sterilized separately and then combined and sealed in a sterile atmosphere, in contrast to canning, where product and package are first combined and then sterilized. [9]

The Importation of Milk Act 1983 was passed by the Parliament of the UK following a successful appeal to the European Court of Justice that prevented government from banning the importation of UHT milk. [10]

In June 1993, Parmalat introduced its UHT milk to the United States. [11] In the American market, consumers are uneasy about consuming milk that is not delivered under refrigeration, and reluctant to buy it. To combat this, Parmalat is selling its UHT milk in old-fashioned containers, unnecessarily sold from the refrigerator aisle. [6] UHT milk is also used for many dairy products.

In 2008 the UK government proposed to produce 9 pints out of every 10 as UHT by 2020 [12] which they believed would significantly cut the need for refrigeration, and thus benefit the environment by reducing greenhouse emissions. [13] However the milk industry opposed this, and the proposition was abandoned.[ citation needed ]

Ultra-high-temperature processing is performed in complex production plants, which perform several stages of food processing and packaging automatically and in succession: [14]

In the heating stage, the treated liquid is first pre-heated to a noncritical temperature (70–80 °C [158–176 °F] for milk), and then quickly heated to the temperature required by the process. There are two types of heating technologies: direct, where the product is put in a direct contact with the hot steam, and indirect, where the product and the heating medium remain separated by the equipment's contact surfaces. The main goals of the design, both from product quality and from efficiency standpoints, are to maintain the high product temperature for the shortest period possible, and to ensure that the temperature is evenly distributed throughout. [14] [15]

Direct systems have the advantage that the product is held at a high temperature for a shorter period of time, thereby reducing the thermal damage for the sensitive products such as milk. There are two groups of direct systems: [15]

In indirect systems, the product is heated by a solid heat exchanger similar to those used for pasteurization. However, as higher temperatures are applied, it is necessary to employ higher pressures in order to prevent boiling. [14] There are three types of exchangers in use: [15]

For higher efficiency, pressurized water or steam is used as the medium for heating the exchangers themselves, accompanied with a regeneration unit which allows reuse of the medium and energy saving. [14]

After heating, the hot product is passed to a holding tube and then to a vacuum chamber, where it suddenly loses the temperature and vaporizes. The process, referred to as flash cooling, reduces the risk of thermal damage, removes some or all of the excess water obtained through the contact with steam, and removes some of the volatile compounds which negatively affect the product quality. Cooling rate and the quantity of water removed is determined by the level of vacuum, which must be carefully calibrated. [14]

Homogenization is part of the process specifically for milk. Homogenization is a mechanical treatment which results in a reduction of the size, and an increase in the number and total surface area, of fat globules in the milk. This reduces milk's tendency to form cream at the surface, and on contact with containers enhances its stability and makes it more palatable for consumers. [16]

UHT milk has seen large success in much of Europe, where across the continent 7 out of 10 people drink it regularly. [17] In countries with a warmer climate such as Spain, UHT milk is preferred due to the high cost of refrigerated transportation and "inefficient cool cabinets". [18] UHT is less popular in Northern Europe and Scandinavia, particularly in Denmark, Finland, Norway, Sweden, the United Kingdom and Ireland. It is also less popular in Greece, where fresh pasteurized milk is the most popular.

UHT milk's protein structure is different from that of pasteurized milk, which prevents it from separating in cheese making. [22]

Two studies published in the late 20th century showed that UHT treatment causes proteins contained in the milk to unfold and flatten, and the formerly "buried" sulfhydryl (SH) groups, which are normally masked in the natural protein, cause extremely-cooked or burnt flavours to appear to the human palate. One study reduced the thiol content by immobilizing sulfhydryl oxidase in UHT-heated skim milk and reported, after enzymatic oxidation, an improved flavor. [5] Two US authors prior to heating added the flavonoid compound epicatechin to the milk, and reported a partial reduction of thermally generated aromas. [23]

Food preservation includes food processing practices which prevent the growth of microorganisms, such as yeasts, and slow the oxidation of fats that cause rancidity. Food preservation may also include processes that inhibit visual deterioration, such as the enzymatic browning reaction in apples after they are cut during food preparation. By preserving food, food waste can be reduced, which is an important way to decrease production costs and increase the efficieny of food systems, improve food security and nutrition and contribute towards environmental sustainability. For instance, it can reduce the environmental impact of food production. 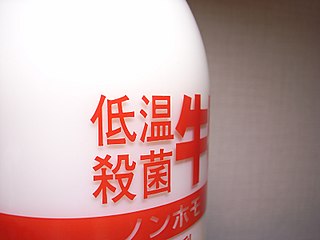 Pasteurization or pasteurisation is a process in which packaged and non-packaged foods are treated with mild heat, usually to less than 100 °C (212 °F), to eliminate pathogens and extend shelf life. The process is intended to destroy or deactivate organisms and enzymes that contribute to spoilage or risk of disease, including vegetative bacteria, but not bacterial spores. 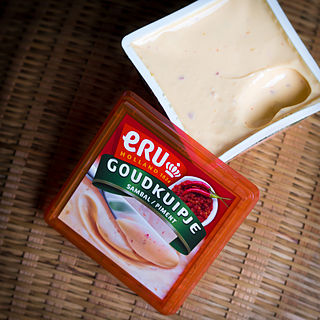 Processed cheese is a food product made from cheese and other unfermented dairy ingredients mixed with emulsifiers. Additional ingredients, such as vegetable oils, salt, food coloring, or sugar may be included. As a result, many flavors, colors, and textures of processed cheese exist. Processed cheese typically contains around 50-60% traditional cheese. 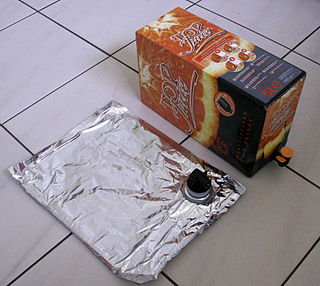 A bag-in-box or BiB is a container for the storage and transportation of liquids. It consists of a strong bladder, usually made of several layers of metallised film or other plastics, seated inside a corrugated fiberboard box. 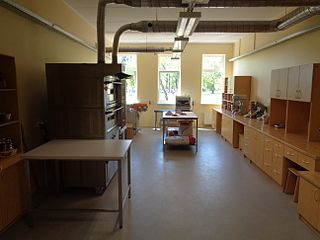 Food technology is a branch of food science that deals with the production, preservation, quality control and research and development of the food products.

Flash pasteurization, also called "high-temperature short-time" (HTST) processing, is a method of heat pasteurization of perishable beverages like fruit and vegetable juices, beer, wine, and some dairy products such as milk. Compared with other pasteurization processes, it maintains color and flavor better, but some cheeses were found to have varying responses to the process. 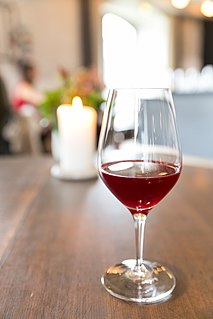 Grape juice is obtained from crushing and blending grapes into a liquid. In the wine industry, grape juice that contains 7–23 percent of pulp, skins, stems and seeds is often referred to as must. The sugars in grape juice allow it to be used as a sweetener, and fermented and made into wine, brandy, or vinegar. 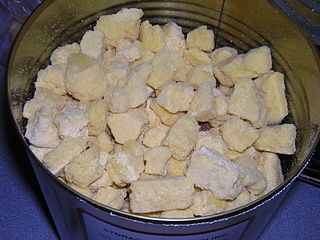 An evaporator is a device in a process used to turn the liquid form of a chemical substance such as water into its gaseous-form/vapor. The liquid is evaporated, or vaporized, into a gas form of the targeted substance in that process.

Liquid packaging board is a multi-ply paperboard with high stiffness, strong wet sizing and a high barrier coating, e.g. plastic. Only virgin paper fibers are used. The barrier coating must hold the liquid and prevent migration of air and flavors through the paperboard.

Protein adsorption refers to the adhesion of proteins to solid surfaces. This phenomenon is an important issue in the food processing industry, particularly in milk processing and wine and beer making. Excessive adsorption, or protein fouling, can lead to health and sanitation issues, as the adsorbed protein is very difficult to clean and can harbor bacteria, as is the case in biofilms. Product quality can be adversely affected if the adsorbed material interferes with processing steps, like pasteurization. However, in some cases protein adsorption is used to improve food quality, as is the case in fining of wines.

Mlekara Subotica was a Serbian producer of dairy products based in Subotica, Serbia.

Steam Infusion is a direct-contact heating process in which steam condenses on the surface of a pumpable food product. Its primary use is for the gentle and rapid heating of a variety of food ingredients and products including milk, cream, soymilk, ketchup, soups and sauces.

Microwave Volumetric Heating (MVH) is a method of using microwaves to evenly heat the entire volume of a flowing liquid, suspension or semi-solid. The process is known as MVH because the microwaves penetrate uniformly throughout the volume of the product being heated, thus delivering energy evenly into the body of the material.