Ultraman: The Next, released in Japan simply as Ultraman (ウルトラマン, Urutoraman) is a 2004 Japanese science fiction superhero film directed by Kazuya Konaka and produced by Tsuburaya Productions. It is a reimagining of the Ultraman character and franchise, and is part of the "Ultra N Project", a three-phase experiment aimed to reinvent the franchise for an older audience. [1] Ultraman: The Next was released in Japan on December 18, 2004 and had its American premiere at Grauman's Egyptian Theatre in Hollywood on June 25, 2005. [2]

Tsuburaya Productions started the "Ultra N P, in an attempt to revitalize the Ultra franchise. The project consisted of a press conference unveiling of Ultraman Noa, the airing of the new Ultra Series Ultraman Nexus , and this movie featuring Ultraman Next. Ultraman Next resembled a lifelike insectoid version of Nexus (with insect-like body armor and organic tissue-like skin underneath). This was the first Ultraman ever to possess this sort of characteristic, a departure from the traditional "clean and shiny" look. BEING GIZA artists provided the theme songs for ULTRAMAN and Ultraman Nexus.

First Lieutenant Shunichi Maki of the Japan Air Self-Defense Force is a prestigious F-15 Eagle jet pilot. A lifelong fan of flying since he was a child, being a pilot is his ultimate dream. Unfortunately, his duties distance himself from his wife, Yoko, who feels neglected, and his son, Tsugumu, who has a possibly terminal congenital blood disease.

Maki decides to quit the Air Force to devote more time to his family and to spend whatever time is left with his son. He takes a part-time job as a commercial tour guide for a kindly group of people who allow him time to take care of his family.

Prior to quitting, Maki and his flight partner Yamashima are alerted to a strange red light streaking towards Japan, and Maki's plane passes through the red light seemingly without any damage. He suffers no ill effects other than strange images briefly playing out in his mind. He later discovers that the images are telepathic messages from a strange being that exists in the red light.

Veteran Ultraman designer Hiroshi Maruyama stressed the difficulty of reinventing the Ultraman design, stating, "Ultraman is a very simple design. This, unfortunately, removes some of the simplicity which is a big part of the design’s charm. But it really can’t be helped. If you tried to remove anything frorm that design what would you have? It would look like Pepsi Man!" Maruyama originally wanted to give Ultraman "transparent skin" with "glowing streams of red energy" but stated that the executives found the idea "a bit too shocking". [2]

The original soundtrack was produced by Tak Matsumoto (of B'z), under his Vermillion Records label (which is in turn, a part of the Being Giza group). It was released in Japan on July 20, 2005. The catalogue code for the album is BMCV-8015.

The Ultra Series, also known as Ultraman, is the collective name for all media produced by Tsuburaya Productions featuring Ultraman, his many brethren, and the myriad Ultra Monsters. Debuting with Ultra Q and then Ultraman in 1966, the Ultra Series is one of the most prominent tokusatsu superhero genre productions from Japan, along with the Toei-produced series Kamen Rider, Super Sentai and the Metal Heroes. The Ultra Series is also one of the most well-known examples of the daikaiju genre, along with Toho's Godzilla series and Daiei Film's Gamera series. However, the Ultra Series also falls into the kyodai hīro subgenre of tokusatsu TV shows. The Ultraman is a Japanese animated television series co-produced by Tsuburaya Production and Tokyo Broadcasting System and animated by Sunrise. The series aired on TBS Television affiliates on the Wednesday 7:00 PM time slot from April 4, 1979 to March 26, 1980, lasting a total of 50 episodes. It was the eighth installment in the Ultra Series and began airing four years after the end of Ultraman Leo.

Ultraman Nexus was produced by Tsuburaya Productions, Chubu-Nippon Broadcasting (CBC), and Dentsu. It was the 18th entry in the Ultra Series. The series aired on Tokyo Broadcasting System, including TBS, CBC, MBS, etc. The show ran from October 2, 2004 until June 25, 2005, with a total of 37 broadcast episodes. Subsequent DVD releases from Bandai Visual saw a brand new 45-minute Episode EX and an extended 45-minute Director's Cut of Episode 29. Ultraman Ace is the 5th show in the Ultra Series. Produced by Tsuburaya Productions, the series aired on Tokyo Broadcasting System from April 8, 1972 to March 31, 1973, with a total of 52 episodes.

Ultraman Neos is a Japanese tokusatsu show, being the 15th show in the Ultra Series. Produced by Tsuburaya Productions, Ultraman Neos was initially intended as a TV series but the project was shelved. Years later, Tsuburaya turned the concept into a 12-episode direct-to-video series. In spite of the appearance of similar designs and a cameo by Zoffy, the series is set in an alternate universe. 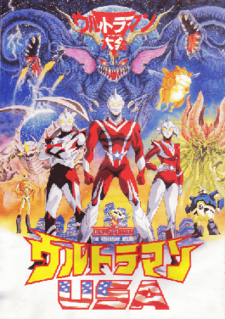 Ultraman: The Adventure Begins is a 1987 American-Japanese animated superhero film jointly produced by Hanna-Barbera Productions and Tsuburaya Productions and animated by both Studio Sign and Ashi Productions. It is the second foreign Ultra Series production overall, and the second foreign Ultraman film after The 6 Ultra Brothers vs. the Monster Army. Originally intended as a pilot for an animated series, no such series ever emerged and the pilot was made into a full-length film. It was released in theaters in the United States on October 12, 1987, with a Japanese theatrical release following on April 28, 1989. The costumes based on the three main heroes were made for use in stage shows in Japan.

Project DMM is a Japanese musical group that primarily performs theme songs for Tsuburaya Productions' Ultra Series of tokusatsu programs. Its current members are Kazuya Daimon, Tsuyoshi Matsubara, and KATSUMI. Tatsuya Maeda had originally been a part of Project DMM, but left in 2000 and was replaced by KATSUMI. The group disbanded in 2009 and subsequently regrouped in 2013.

Ultraman Story is a 1984 Japanese tokusatsu, superhero, and kaiju film directed by Koichi Takano and produced by Tsuburaya Productions. The film serves as a retelling of the events of the Showa Universe of the Ultraman franchise, and also provides an insight into the origins of Ultraman Taro.

Ultraman X The Movie is a Japanese superhero and kaiju film, serving as the film adaptation of the 2015 Ultra Series television series Ultraman X. It was released on March 12, 2016, in celebration to the 50th anniversary of the Ultra Series, as well as 50th anniversary of Ultraman and 20th anniversary of Ultraman Tiga, both appearing in this movie as supporting characters. The film was scheduled for release on January 8, 2017 in the United States along with Ultraman Ginga S The Movie as a double feature. Actors of the English dub were announced on December 10, 2016 by SciFi Japan. The American release also coincided with the Canadian release from William Winckler Productions.

Ultraman is a fictional superhero and is the first tokusatsu hero launched by the Ultra Series and by extension, Tsuburaya Productions. His appearance in the entertainment world helped spawn the Kyodai Hero genre with countless shows such as Godman and Iron King.

Ultraman Nexus is the titular character of the 2004-2005 Ultra Series Ultraman Nexus. His true form is the legendary warrior Ultraman Noa, he chased his twisted doppelgänger Dark Zagi and managed to defeat the villain but the battle cost him his true form, causing him revert first into Ultraman The Next where he chased the Space Beast, Beast the One to Earth and bonded with an Air Force pilot named Shunichi Maki. Five years later in 2009, he evolved into Ultraman Nexus and bonded with several hosts, called Dunamists to fight against a wave of Space Beasts and the dark giants. When Dark Zagi rose to prominence once more, Nexus bonded with Kazuki Komon and regained his true form, Noa, defeated the evil warrior and finally killed him for good.

Ultraman Jack is the protagonist of the 1971–1972 tokusatsu Ultra Series, Return of Ultraman. Sometime after Ultraseven's departure, Earth had entered a period of peace until a string of incidents wherein monsters awakened from slumber, appearing one after another. Jack bonded with the race car driver Hideki Go to save his life and as the former's means to operate on Earth while they joined MAT to fight against monster attacks and alien invasions. 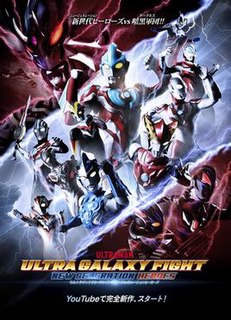 Ultra Galaxy Fight is a Japanese online miniseries produced by Tsuburaya Productions, based on the low-budget series Ultra Fight while being marketed for worldwide audiences through YouTube in both Japanese and English versions for viewers overseas. It was originally released from September 29, 2019 while coinciding with the television broadcast of Ultraman Taiga. Eight months after it ended, the series was announced to receive a sequel story in November 2020.

Ultraman Z is a Japanese tokusatsu television series produced by Tsuburaya Productions. It is the 32nd entry to the Ultra Series, the eighth and last entry to the New Generation Hero lineup and celebrated the 10th anniversary of Ultraman Zero. It premiered in TV Tokyo on June 20, 2020.

Shin Ultraman is an upcoming Japanese kaiju film directed by Shinji Higuchi and written and produced by Hideaki Anno. A reimagining of Ultraman, the film is a co-production between Toho Pictures and Cine Bazar, with the film presented by Tsuburaya Productions, Toho, and Khara. The film is scheduled to be released in Japan in 2021, commemorating the 55th anniversary of the Ultra Series.