Dove began his dance training at Boggs Academy in Georgia. Dove gave up his premedical studies at Howard University to transfer to the University of Wisconsin and study dance with Xenia Chilistwa of the Kirov Ballet. He then transferred to Bennington College where he graduated with a Bachelor of Arts in dance in 1970. He then moved to New York City and was offered a scholarship to Merce Cunningham School as well as a position in the company. While in New York he performed for Mary Anthony, Pearl Lang, and Anna Sokolow. Alvin Ailey asked Dove to join his company in 1973 after seeing Dove perform in Sokolow's Rooms.

Dove soon became Alvin Ailey's principal dancer and became renowned for his ability to command the stage with a powerful and dramatic clarity. [1] His choreographic debut came in 1979 with the piece "I see the moon…. and the moon sees me." He then left Alvin Ailey the following year and became the assistant director at the Groupe de Recherche Choreographique de l'Opéra de Paris from 1980 to 1983. Dove then became a freelance choreographer, working for companies such as the Dutch National Ballet, the Basel Ballet, American Ballet Theatre, New York City Ballet, Dayton Contemporary Dance Company (DCDC) and the London Festival Ballet.

Alvin Ailey Jr. was an American dancer, director, choreographer, and activist who founded the Alvin Ailey American Dance Theater (AAADT). He created AAADT and its affiliated Ailey School as havens for nurturing Black artists and expressing the universality of the African-American experience through dance. A gay man, his work fused theater, modern dance, ballet, and jazz with Black vernacular, creating hope-fueled choreography that continues to spread global awareness of Black life in America. Ailey's choreographic masterpiece Revelations is recognized as one of the most popular and most performed ballets in the world.

Ted Shawn was one of the first notable male pioneers of American modern dance. Along with creating the Denishawn School with former wife Ruth St. Denis he was also responsible for the creation of the well-known all-male company Ted Shawn and His Men Dancers. With his innovative ideas of masculine movement, he was one of the most influential choreographers and dancers of his day. He was also the founder and creator of Jacob's Pillow Dance Festival in Massachusetts, and "was knighted by the King of Denmark for his efforts on behalf of the Royal Danish Ballet."

Lester Horton was an American dancer, choreographer, and teacher. 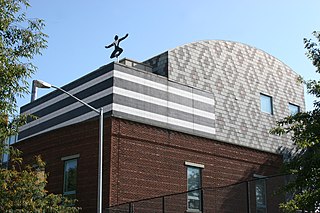 Dance Theatre of Harlem (DTH) is an American professional ballet company and school based in Harlem, New York City. It was founded in 1969 under the directorship of Arthur Mitchell and later partnered with Karel Shook. Milton Rosenstock served as the company's music director from 1981 to 1992. The DTH is renowned for being both "the first Black classical ballet company", and "the first major ballet company to prioritize Black dancers".

Judith Ann Jamison is an American dancer and choreographer. She is the artistic director emerita of Alvin Ailey American Dance Theater.

The Alvin Ailey American Dance Theater (AAADT) is a modern dance company based in New York City. It was founded in 1958 by choreographer and dancer Alvin Ailey. It is made up of 32 dancers, led by artistic director Robert Battle and associate artistic director Matthew Rushing.

Desmond Richardson is an American dancer, co-founder, and co-artistic director of Complexions Contemporary Ballet. He has mastered a wide range of dance forms including hip hop, classical, modern, classical ballet, and contemporary ballet.

Talley Beatty was born in Cedar Grove, Louisiana, a section of Shreveport, but grew up in Chicago, Illinois. He is considered one of the greatest of African American choreographers, and also bears the titles dancer, doctor, and dance company director. After studying under Katherine Dunham and Martha Graham, Beatty went on do solo work and choreograph his own works which center on the social issues, experiences, and everyday life of African Americans. Beatty and his technique and style of dancing were both praised and criticized by critics and dancers of his day. 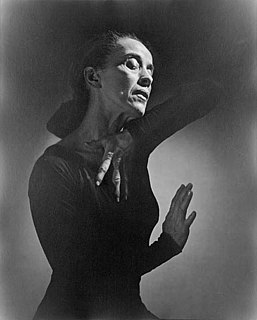 Modern dance is a broad genre of western concert or theatrical dance which included dance styles such as ballet, folk, ethnic, religious, and social dancing; and primarily arose out of Europe and the United States in the late 19th and early 20th centuries. It was considered to have been developed as a rejection of, or rebellion against, classical ballet, and also a way to express social concerns like socioeconomic and cultural factors.

Jeraldyne Blunden (1940–1999) was the founder and artistic director of the Dayton Contemporary Dance Company.

Dancer and choreographer Ronald K. Brown founded the dance company Evidence in New York in 1985. Brown's work incorporates modern dance, Senegalese Sabar and other West African movement vocabularies, Afro-Caribbean dance, and contemporary urban dance from around the world. He has choreographed numerous works for his own company, as well as for Philadanco, Alvin Ailey American Dance Theater, the Jacob's Pillow Dance Festival, the Maimouna Keita West African Dance Company, and many others. Brown has received numerous awards, including a Guggenheim Fellowship, a Bessie Award, a Black Theater Alliance Award, and an Audelco Award for the choreography of Regina Taylor's musical Crowns. He has also been a guest artist at The Sharon Disney Lund School of Dance at CalArts. He studied dance with Mary Anthony.

Camille A. Brown is a dancer, choreographer, director and dance educator. She is the Founder & Artistic Director of Camille A. Brown & Dancers, and has congruently choreographed commissioned pieces for dance companies, Broadway shows, and universities. Brown started her career as a dancer in Ronald K. Brown’s Evidence, A Dance Company, and was a guest artist with Rennie Harris Puremovement, and Alvin Ailey American Dance Theater. Brown has choreographed major Broadway shows such as Choir Boy, Once on This Island and Jesus Christ Superstar Live in Concert! that aired on NBC. Brown also teaches dance and gives lectures to audiences at various universities such as Long Island University, Barnard College and ACDFA, among others.

Kyle Abraham is an American choreographer and dancer. He founded his own company A.I.M by Kyle Abraham in 2006 in New York City and has produced many original works for A.I.M such as The Radio Show (2010), Absent Matter (2015), Pavement (2012), Dearest Home (2017), Drive (2017), INDY (2018), Studies on Farewell (2019), and An Untitled Love (2021). Kyle has also been commissioned to create new works for international dance companies such as Untitled America (2016) for the Alvin Ailey American Dance Theater, The Runaway (2018) for New York City Ballet, The Bystander (2019) for Hubbard Street Dance Chicago, Only The Lonely (2019) for Paul Taylor American Modern Dance and Ash (2019) a solo for American Ballet Theater principal dancer Misty Copeland.

Dayton Contemporary Dance Company, which was founded in 1968 by Dayton, Ohio native, Jeraldyne Blunden, is the oldest modern dance company in Ohio, and one of the largest companies of its kind between Chicago and New York City. 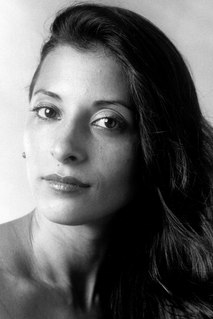 Alonzo King, born in Georgia to civil-rights activists Slater King and Valencia King Nelson, is an American dancer and choreographer based in San Francisco. King grew up in Georgia and California, and, as an adult, decided his contribution would be teaching and choreography. In 1982, having established himself as a well-respected teacher, he founded Alonzo King LINES Ballet. Believing that everyone has the potential to grow through dance, seven years later he opened what was then known as the San Francisco Dance Center, offering classes for both professionals and the community.

Tracy Inman is an American dancer, choreographer, and educator who performed with the Alvin Ailey American Dance Theater. He is currently the co-director of The Ailey School and a choreographer & consultant for the television series Pose.