Daudpota was born on 25 March 1896 at Talti, Dadu District. His family was poor. His father, Mohammad Daudpota, was a farmer and Carpenter. His primary education was in his hometown. For secondary education, he went to Larkana in 1914 and later to the Madressah school of Naushahro Feroze. Eventually, he matriculated from Sindh-Madrasa-tul-Islam in Karachi. He got first position in 1917. After passing his Matriculation, he went to D. J. Science College, Sindh at Karachi, where he received his BA and MA degrees. Government of India awarded him a scholarship for higher studies at Cambridge University where he received his Ph.D. degree. [1]

In 1927, he wrote his doctoral thesis entitled "The effect of Arabic Poetry on Persian Poetry" and received the degree of Ph.D. After completion of his doctoral degree, he returned to his homeland in 1927 and was appointed as Principal of Sindh-Madrasa-tul-Islam. [1] Later on, he joined Ismail Yusuf College, Bombay as professor of Arabic. [2] He worked there for nine years. He was appointed Director of Public Instruction in Sindh in 1939 taking over from Khan Bahadur Ghulam Nabi Kazi. He was given the honorary title of Shams-ul-Ulama ("Sun of the Scholars") from the British Government in 1940. [3] [1]

He was a member of the Pakistan Public Service Commission from 1950 to 1955. He performed Hajj in 1955. He served as superior (care taker) of Quarterly Mehran in 1957.

Daudpota was the father of the famous Air Marshall Azim Daudpota who also was a Governor of Sindh and a former chairman of Pakistan International Airlines. [4]

Daudpota did his scholarly research in English, Arabic, Persian, and Sindhi. His fields of research included history, poetry, criticism, biography, religion and Sindhi literature. He wrote more than two dozens books and a number of columns and essays. [5]

Daudpota died on 22 November 1958 at Karachi. His last resting place is at the Shrine of Shah Abdul Latif Bhittai at Bhitshah, Sindh, Pakistan. [6]

Sindhis are an Indo-Aryan ethnic group who speak the Sindhi language and are native to the Sindh province of Pakistan. After the partition of India in 1947, many Sindhi Hindus and Sindhi Sikhs migrated to the newly formed Dominion of India and other parts of the world. Today, ethnic Sindhis are found predominantly in Pakistan while a minority resides in India. 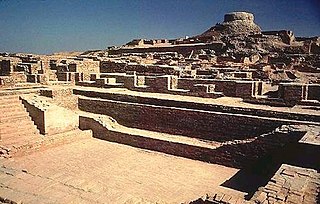 Sindhology is a field of study and academic research that covers the history, society, culture, and literature of Sindh, a province of Pakistan. The subject was first brought into the academic circles with the establishment of the Institute of Sindhology at Sindh University in 1964. Since then, it has developed into a discipline that covers the aspects of history and archaeology from the Indus Valley Civilization to the modern Sindhi society. The subject has also received wider attention at international levels. An academic or expert who specialises in Sindhology is called a Sindhologist.

Shah Abdul Latif Bhittai, commonly known by the honorifics Lakhino Latif, Latif Ghot, Bhittai, and Bhit Jo Shah, was a Sindhi Sufi mystic, and poet, widely considered to be the greatest poet of the Sindhi language.

Sindhi literature, Sindhi-language literature in the Pakistani province of Sindh, consists of poetry and prose. It was influenced by a number of cultures over a thousand years.

Elsa Kazi (1884–1967), commonly known as "Mother Elsa", particularly in the Sindh province of Pakistan was a German writer of one-act plays, short stories, novels and history, and a poet. She was a composer and a musician of considerable achievement, involved in virtually every conspicuous branch of fine arts. Her paintings are often seen in many distinguished family homes. 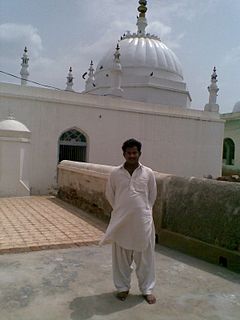 Abdul Raheem Garhori was a Sufi saint and poet of the Sindh. He belonged to the Mangrio-family and his father's name was Sadullah Mangrio.

Nabi Bakhsh Khan Baloch was a research scholar and writer. He was termed as a 'moving library' on the province of Sindh, Pakistan.

Umar Marvi or Marui, is a folktale from Sindh, Pakistan about a village girl Marvi Maraich, who resists the overtures of a powerful King and the temptation to live in the palace as a queen, preferring to be in simple rural environment with her own village folk. 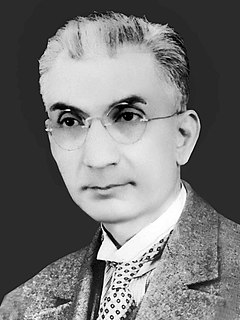 Imdad Ali Imam Ali Kazi, also known as Imdad Ali Kazi, the son of Kazi Imam Ali Ansari, was a scholar, philosopher, jurist, and educationist. He is considered to be a founding father of the University of Sindh at its present location at Jamshoro. He published works of Sindhi art, literature, mysticism, education and history. Along with his wife Elsa, he wrote a book on comparative religion, The Adventures of the Brown Girl in her Search for God, which was published by Arthur H Stockwell Ltd., England, in 1933. They also worked on a translation of the verses of Shah Abdul Latif Bhittai.

Muhammad Ibrahim Joyo was a Pakistani teacher, writer, scholar and Sindhi nationalist. He was born in the village of Abad near Laki, Kotri, Dadu, now in Jamshoro, Sindh, Pakistan. He was considered the living legend of Sindhi literature, who had written, translated and edited hundreds of books and brochures. He was affiliated with the Theosophical Society.

Pir Hassam-ud-Din Rashidi was a Pakistani historian and scholar.

Pir Ali Muhammad Rashidi was a Pakistani politician, scholar, bureaucrat, journalist and well-known writer. He was from Rashidi Syed, those are calculated in Lakyari Syed's branch. He was the elder brother of scholar Pir Hassam-ud-Din Rashidi.

Naserpur , or Nasarpur is a small town in the Sindh province of Pakistan.

Khan Bahadur Ghulam Nabi Kazi MBE was an educator in Sindh, which is one of the four provinces of what is now Pakistan. He rose to the position of first Director of Public Instruction, Sindh after remaining Educational Inspector, Sindh in the Bombay Presidency during the British Empire.

Khawaja Muhammad Zaman of Luari was a sufi saint and poet from Sindh. His father, Shaikh Abdul Latif Siddiqi, was a descendant of first Rashidun Caliph Abu Bakr. Their forefathers had moved to Sindh in Abbasid era.

Hakeem Fateh Mohammad Sehwani was born in 1882 at Sehwan Sharif, the then Dadu District and now in Jamshoro District, Sindh. He was great scholar, poet, literary, journalist and politician of Sindh. He died on 13 December 1942. 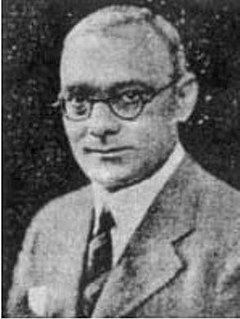 Hotchand Molchand Gurbakhshani was a leading academician, an educationist and scholar who is well known for his annotated translation of the Sufi poetic compendium Shah Jo Risalo. He served as Principal of D.J. Sindh College Karachi. He also served as the first president of Sindh Historical Society.