Umar Aliyevich Dzhabrailov (Russian : Умар Алиевич Джабраилов; born 28 June 1958, Grozny, USSR) is a Russian politician and advisor to Sergei Prikhodko, the Assistant to the President of Russia, [1] He also is the vice president of the Artists Union of Russia, a member of the Russian delegation to the Parliamentary Assembly of the Council of Europe [2] and was the representative to the Federation Council of Russia from the executive body of the Chechen Republic (2004–2009). He is an ethnic Chechen.

From 1973 to 1977, Dzhabrailov studied in the Rospotrebsoyuz College in Moscow. From 1977 to 1979, served in the Soviet Army in the Strategic Missile Forces in Korosten in Ukraine, holding the rank of Captain. In 1985, Dzhabrailov graduated with honors from the Moscow State Institute of International Relations (MGIMO) of the Ministry of Foreign Affairs. In 1989, he became general director of LLP "Danako". In 2001, he was appointed Chairman of the Board of Directors of First Mutual Credit Society Bank. [3] From 2001 to 2004, he was a President of the "Group Plaza”. [4] From 2004 to 2009, he was a senator of the from the Chechen Republic.

Dzhabrailov is often associated with famous Italian and Russian designers and artists, including Roberto Cavalli, Aldo Rota, and well acquainted with Zurab Tsereteli. [5] With Roberto Cavalli. he opened the restaurant Just Cavalli on the site of the restaurant Prague. [6] [7] Dzhabrailov is a collector of works of art, including paintings by Russian artists. [8] and has often supported the arts. [9] Since 2010 he has been actively involved in the Moscow Forum of Culture. [10]

He has two daughters from his first marriage. He is currently married to a Russian musician. Dzhabrailov is fluent in English, German and Italian and understands French, Spanish and Czech. He holds a diploma of the Federation Council. [11] He is an academician at the Russian Academy of Natural Sciences. [12]

Chechnya, officially the Chechen Republic, is a constituent republic of Russia situated in the North Caucasus in Eastern Europe, close to the Caspian Sea. The republic forms a part of Russia's North Caucasian Federal District, and shares land borders with the country of Georgia to its south; with the Russian republics of Dagestan, Ingushetia, and North Ossetia-Alania to its east, north, and west; and with Stavropol Krai to its northwest.

Akhmed Halidovich Zakayev is a former Deputy Prime Minister and Prime Minister of the unrecognised Chechen Republic of Ichkeria (ChRI). He was also the Foreign Minister of the Ichkerian government, appointed by Aslan Maskhadov shortly after his 1997 election, and again in 2006 by Abdul Halim Sadulayev. During the First Chechen war Zakayev took part in the battles for Grozny and other military operations, as well as in high-level negotiations with the Russian side.

The Second Chechen War was an armed conflict in Chechnya and the border regions of the North Caucasus between the Russian Federation and the Chechen Republic of Ichkeria, fought from August 1999 to April 2009. 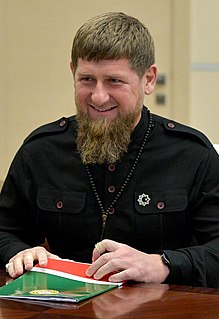 Ramzan Akhmadovich Kadyrov is a Chechen politician currently serving as the Head of the Chechen Republic. He was a former member of the Chechen independence movement. 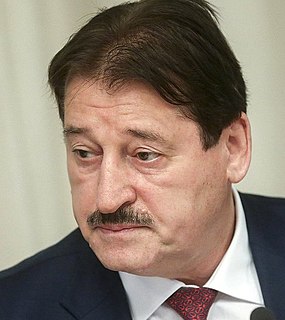 Ruslan Sultanovich Aushev was the president of Ingushetia from March 1993 to December 2001. He was reportedly the youngest officer in the Soviet army to reach the rank of lieutenant general. He was awarded the title Hero of the Soviet Union on 7 May 1982 for his actions in Afghanistan. Aushev has emerged as Ingushetia's most popular politician, having kept peace and stability during the Chechen war.

The Federation Council is the upper house of the Federal Assembly of Russia, according to the 1993 Constitution of the Russian Federation. Each of the 85 federal subjects of Russia – consisting of 22 republics, 46 oblasts, nine krais, three federal cities, four autonomous okrugs, and one autonomous oblast – sends two senators to the Council, for a total membership of 170 Senators. In addition, the Constitution also provides for senators from the Russian Federation, which can be no more than thirty, as well as (optionally) former presidents as life senators. 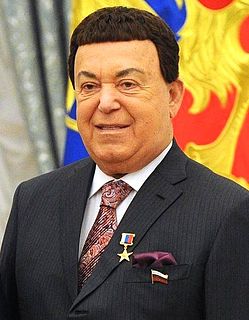 Paul Edward Tatum was an American expatriate businessman assassinated in a Moscow metro station close to his hotel.

Movladi Saidarbievich Udugov in Germenchuk, Shalinsky District, Chechnya into the Shirdi teip) is an activist and the former First Deputy Prime Minister of the separatist Chechen Republic of Ichkeria (ChRI). As a Chechen propaganda chief, he was credited for the Chechen separatists' victory on the information front during the First Chechen War.

The War of Dagestan, also known as the Invasion of Militants in Dagestan began when the Chechnya-based Islamic International Peacekeeping Brigade (IIPB), an Islamist group, led by warlords Shamil Basayev, Ibn al-Khattab, Ramzan Akhmadov and Arbi Barayev invaded the neighboring Russian republic of Dagestan, on 7 August 1999, in support of the Shura of Dagestan separatist rebels. The war ended with a major victory for the Russian Federation and Dagestan Republic, and the retreat of the IIPB. The invasion of Dagestan served as the main casus belli alongside the series of apartment bombings in September 1999 for the Second Chechen War.

Egor Sergeyevich Lavrov is a Russian entrepreneur who made his fortune in Internet-related projects, political PR, and a number of businesses in the United States and Latin America.

Said-Emin Umarovich Dimayev was a Soviet composer. His father Umar Dimayev was a legendary accordionist and folk musician, and his brothers Ali and Valid are professional Chechen musicians. 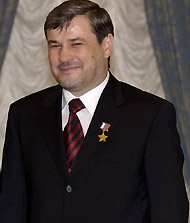 Ruslan Bekmirzayevich Yamadayev was a Chechen military leader and politician. A member of the high-profile Yamadayev family, he was assassinated in Moscow in 2008. Yamadayev was one of Kremlin's most loyal allies.

Umar S. Israilov was a former bodyguard of Chechen President Ramzan Kadyrov who became a critic of the Chechen government. He was shot and killed in exile in Vienna, Austria on January 13, 2009. 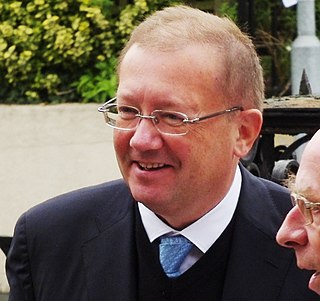 Alexander Vladimirovich Yakovenko is a Russian diplomat. He served as the Ambassador of Russia to the United Kingdom between January 2011 and August 2019. Since August 2019, he has been rector of the Diplomatic Academy of the Ministry of Foreign Affairs. He is a former Deputy Minister of Foreign Affairs of Russia. While working at the Ministry of Foreign Affairs in Moscow, he was in charge of multilateral diplomacy. A graduate of the Moscow State Institute of International Relations in 1976, he later gained a Doctor of Law degree. Yakovenko holds the diplomatic rank of Ambassador Extraordinary and Plenipotentiary, and speaks Russian, English and French.

The 2010 Chechen Parliament attack took place on the morning of 19 October 2010, when three Chechen militants attacked the parliament complex in Grozny, the capital of the Chechen Republic, a federal subject of Russia. At least six people were killed, including two police officers, one parliament employee and all three suicide commandos.

Umar Nazarovich Kremlev is a Russian sports functionary, philanthropist and benefactor, who is the President of the International Boxing Association (AIBA). He has been Secretary General and Member of the Executive Committee of the Boxing Federation of Russia since February 2017.