Habib Omar bin Hafiz was born on 27 May 1963 CE or 4 Muharram 1383 AH in Tarim, Hadhramaut, Yemen, and raised in a household that possessed a tradition and lineage of Islamic scholarship and righteousness by his father. His father was Muhammad bin Salim bin Hafiz, a Habib and mufti of Tarim, a pious caller to Islam, scholar, and a martyr of the communist uprising. He is a Sayyid (a descendant of the Islamic prophet Muhammad), through his grandson Hussein ibn Ali. [4] The surname "Hafiz" comes from his great grandfather's name, a branch of the family of "Shaikh Abubakr bin Salim", which is also the name of his paternal thirteenth generation progenitor. [5]

Having memorized the Qu'ran at a very young age, Habib also studied and memorized core texts in Fiqh (Islamic jurisprudence), the Arabic language, Hadith (Prophetic traditions) and many other religious sciences. He studied Islamic sciences including spirituality from his father.

Later, he enrolled at the Ribat of al-Bayda', where he began studying the traditional Islamic sciences under the tutelage of Al-Habib Muhammad bin Abd-Allah al-Haddar, as well as under the Shafi‘i jurist and scholar Al-Habib Zain bin Sumait. Habib Omar was given permission to teach soon after. [1]

He then studied under the mufti of Ta‘iz, al-Habib Ibrahim bin Aqil bin Yahya. He also studied under Shaikh al-Habib Muhammad al-Haddar, who gave him his daughter's hand in marriage. Bin Hafiz then traveled to the Hejaz and studied several books with scholars, including Al-Habib Abdul Qadir bin Ahmad al-Saqqaf, Al-Habib Ahmed Mashur al-Haddad, and Al-Habib Attas al-Habashi. [1]

At the age of 15, Habib began to teach, while continuing to study and receive lessons. [1]

After returning to Tarim, bin Hafiz established Dar al-Mustafa, an Islamic educational seminary. Habib currently lives in Tarim, where he oversees the development of Dar al-Mustafa and the schools that have been set up under his management. Dar al-Mustafa has been featured in The New York Times. [7] His seminary accepts students from a variety of countries. Some of his prominent students in the UK include Shaykh Ibrahim Osi Efa, and in the United States, Shaykh Abdul Karim Yahya and Shaykh John (Yahya) Rhodus, [7] while his prominent students in Indonesia include the late Habib Munzir Al-Musawa.

Habib travels regularly to meet with students and leaders, deliver talks and media interviews, and participate in official and private functions. Among the places he has been include: the Persian Gulf states, Syria, Lebanon, Jordan, Egypt, Morocco, Algeria, Sudan, Mali, Kenya, Tanzania, South Africa, the Comoros Islands, India, Pakistan, Sri Lanka, Indonesia, Malaysia, Singapore, Brunei, Australia, Britain, France, Germany, Holland, Belgium, Denmark, Sweden, and Spain. He has connected to the chains of transmission of the scholars of these regions.

In 2006, Habib met with Muhammad Tahir-ul-Qadri; they exchanged knowledge on Islam, and he also received an Ijazah (certificate to teach) of Hadith from Tahir-ul-Qadri. [8]

In 2007, Habib joined the ranks of the world's leading Muslim academics and scholars as a signatory to A Common Word Between Us and You, a document that builds bridges between the Muslim and Christian communities. [9] He has also spoken at Cambridge University on the need for such a dialogue. [10] [11] [12]

In July 2008, he partnered with Muslim Aid Australia as founder of Yemen-based NGO Al-Rafah Charitable Society to address issues of poverty and hunger and lack of sufficient health care that affect areas of Tarim.

In 2019, Habib was listed at number 8 in The 500 Most Influential Muslims, an annual ranking compiled by Georgetown University's Prince Al-Waleed Center for Muslim–Christian Understanding and the Royal Islamic Strategic Studies Centre of Jordan.

Habib has appeared in the list's top 50 every year since its inaugural publication in 2009.

Habib has many audio and visual publications as well as writings. Among the latter are: 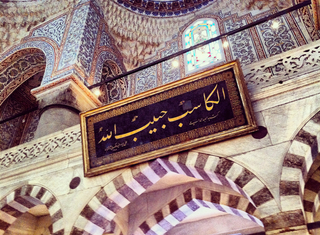 Habib, sometimes written as Habeeb, is an Arabic masculine given name, occasional surname, and honorific, with the meaning "beloved" or "most loved".

The tābi‘ūn, "followers" or "successors", are the generation of Muslims who followed the Companions of the Prophet Muhammad (ṣaḥābah), and thus received their teachings secondhand. A tābi‘ knew at least one ṣaḥābiyy. As such, they played an important part in the development of Islamic thought and knowledge, and in the political development of the early caliphate.

Imam Sayyid Abd Allah ibn Alawi al-Haddad was a Yemeni Islamic scholar. He lived his entire life in the town of Tarim in Yemen's Valley of Hadramawt and died there in 1720 CE. He was an adherent to the Ashari Sunni Creed of Faith (Aqeedah), while in Islamic jurisprudence (Fiqh), he was a Shafi'i.

Tarim is a historic town situated in Wadi Hadhramaut of South Yemen, in the southern part of the Arabian Peninsula. Tarim is widely acknowledged as the theological, juridical, and academic center of the Hadhramaut Valley. An important focus of Islamic learning, it is estimated to contain the highest concentration of descendants of the Islamic Prophet Muhammad (sayyids) anywhere in the world. The city is distinguished for producing numerous Islamic scholars, including Imam al-Haddad. Additionally, Tarim is also home to Dar al-Mustafa, a well-known educational institute for the study of traditional Islamic Sciences.

Ahmad al-Muhajir also known as Al-Imām Aḥmad bin ʻIsa was an Imam Mujtahid and the progenitor of Ba 'Alawi sada group which is instrumental in spreading Islam to India, Southeast Asia and Africa. He was the son of ‘Isa the son Muhammad the son of 'Ali al-Uraidhi who was the fourth son of Imam Ja'far as-Sadiq, a fifth generation descendant of Ali bin Abu Talib and Fatimah bint Muhammad, the daughter of Muhammad.

The Ba'Alawi tariqa, also known as the Tariqa Alawiyya is a Sufi order centered in Hadhramawt, Yemen, but now spread across the Indian Ocean rim along with the Hadhrami diaspora. The order is closely tied to the Ba'Alawi sadah family.

Abu Bakr al-ʿAydarūs, also known as Sayyid Abū Bakr al-ʿAdanī ibn ʿAbdullāh al-ʿAydarūs ; 1447–1508) was a Hadhrami religious scholar of sufism and a poet of wrote several Arab poems in vernacular style. Abu Bakr led most of his adult life in Aden, where he was well respected for his societal contributions to the well-being of the city's residents. After his death in 1508, he was mourned by the city's residents, and was later venerated as the wali or "patron saint" of Aden.

The Hadhrami or Hadharem are people inhabiting the Hadhramaut region in Yemen and their descendants in diaspora communities around the world. They speak Hadhrami Arabic an Arabic dialect with a heavy Hadramite Substrate, which belongs to the South Semitic languages.

Dar al-Mustafa is a madrasah in Tarim, Hadhramaut, Yemen.

Muhammad ibn 'Ali Ba 'Alawi commonly known as al-Faqih al-Muqaddam, Arabic pronunciation: [muˈħammɑd al-faˈqiːh al-ˈmuqaddam]; 574 H - 653 H or 1178 CE - 1232 CE) is known as the founder of Ba 'Alawiyya Sufi order which has influenced Sufism in Yemen, Pakistan, India and Southeast Asia. He is the only son of Ali son of Muhammad Sahib Mirbath whom all 75 families of Ba 'Alawi sada that spread out from Yemen to Southeast Asia are rooted.

Sayyid Alwi bin Thahir al-Haddad was an Islamic scholar known as the Mufti of Johor in twentieth century and also the co-founder of Jamiat Kheir and Al-Rabithah al-Alawiyyah foundations in Batavia during colonial Dutch East Indies.

Abul Hasan Hankari Abu Al Hasan Ali Bin Mohammad Qureshi Hashmi Hankari, town of Mosul, died 1st Moharram 486 AH, in Baghdad,, was a Muslim mystic also renowned as one of the most influential Muslim scholar, philosopher, theologian and jurist of his time and Sufi based in Hankar.