Umaru Shehu (born December 8, 1930) is a Nigerian Professor of Medicine and former Vice Chancellor of the University of Nigeria, Nsukka. He is a Professor Emeritus, Community health, University of Maiduguri and former President of the Nigerian Academy of Science. Professor Umaru received a Bachelor of Medicine degree, MBBS from the University of London. Professor Umaru Shehu is not just a renowned Nigerian professor of medicine, he is a genuine Icon, true elder statesman and great role model. He is one of those few who still command genuine public respect on account of the quality of his person at a time when integrity and honor are in short supply.

Professor Umaru Shehu bagged his first degree in Medicine, (MBBS), from the University of London and capped the feat with a fellowship of the institute of cancer research while serving as the editor-in-chief of the British Medical.

Professor Umaru Shehu is not just a renowned Nigerian professor of medicine, he is a genuine Icon, true elder statesman and great role model. He is one of those few who still command genuine public respect on account of the quality of his person at a time when integrity and honor are in short supply.

He was then redeployed to North-Eastern State as permanent secretary, ministry of health and chief medical officer, an offer he declined and moved to Ahmadu Bello University Zaria to take up appointment as reader and acting head of department of community medicine, from 1968-1970; deputy dean, faculty of medicine, from 1968-1970; acting director, institute of health, from 1969-1970; Professor of community medicine, in 1970.

He became head of department, community medicine, from 1970-1978; director, institute of health, from 1970-1977; deputy vice-chancellor, from 1975-1976; Pro vice-chancellor (Academic), from 1977-1978. The professor held visiting professorships in various universities, including the school of medicine, University of North Carolina at Chapel Hill, USA, from 1976-1977.

The renowned prof was appointed vice chancellor, university of Nigeria, Nsukka, from 1978-1980. He also worked with the World Health Organization (WHO) as short term consultant, (working group on health services and manpower development mechanism) in Geneva, in September, 1970; appointed temporary adviser, in October, 1970; short term consultant, from 1971-1973; consultant (Technical Discussions), 24th WHO regional committee for Africa.

He was a national WHO program coordinator/representative in Nigeria, from 1980-1985; director, WHO sub-regional health development office 111, from 1985-1989 and WHO representative to Ethiopia, in 1990. At the University of Maiduguri, Prof Umaru Shehu was appointed as an honorary consultant physician, from 1991 to date, and became Professor Emeritus in 2000.

Prof Umaru Shehu was president of medical schools in Africa, from 1973-1975; and an external examiner in public health, university of Ghana medical school. He is the current chairman board of governors of the STOPAIDS organization; chairman governing board of the National Agency for the Control of AIDS, (NACA)]. [1] He also received a fellowship of the Institute of Cancer Research 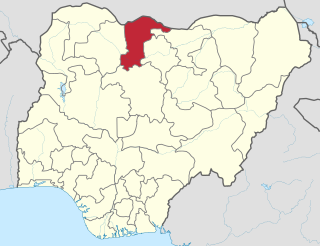 Katsina, usually referred to as Katsina State to distinguish it from the city of Katsina, is a state in North West zone of Nigeria. Its capital is Katsina, and its Governor is Aminu Bello Masari, a member of the All Progressives Congress. Katsina State was brought out of old Kaduna State in 1987.

Ahmadu Bello University (ABU) is a federal government research university in Zaria, Kaduna State, Nigeria. ABU was founded on 4 October 1962, as the University of Northern Nigeria.

The Kaduna Mafia is a loose group of Nigerian businessmen, civil servants, intellectuals and military officers from Northern Nigeria, who resided or conducted their activities in Kaduna, the former capital of the region towards the end of the First Republic.

Jibril Muhammad Aminu is a professor of cardiology. He was Nigerian Ambassador to the USA (1999–2003) and was elected Senator for Adamawa Central constituency of Adamawa State, Nigeria, taking office on 29 May 2003. He is a member of the People's Democratic Party (PDP).

Professor Attahiru Muhammadu Jega is a Nigerian academic and former Vice-Chancellor of Bayero University, Kano. On 8 June 2010, he was nominated by then President Goodluck Jonathan as the new Chairman of the Independent National Electoral Commission (INEC), subject to Senate confirmation, as a replacement for Professor Maurice Iwu, who vacated the post on 28 April 2010. Jega is the only INEC chairman to oversee two Nigerian General Elections. Jega retired on 30 June 2015, handing over his position to Amina Zakari according to a directive by President Muhammadu Buhari.

Zaynab Alkali was born into the Tura-Mazila family of Borno and Adamawa States. For secondary education, she attended Queen Elizabeth Secondary School, Ilorin. Zaynab Alkali went on to obtain both her first and second degrees from ABU/ABC, Zaria. At Bayero University Kano, she studied English to a doctorate level.

Chukwuedu Nathaniel II Nwokolo was a Nigerian physician specialist in tropical diseases. He was recognised for discovering and mapping out the area of paragonimiasis lung disease in Eastern Nigeria, with a study of the disease in Africa and clinical research for its control. He founded SICREP: Sickle Cell Research Programme to effectively fight the disease in Nigeria and globally.

Jarlath Udoudo Umoh is a professor of Veterinary medicine at Ahmadu Bello University. He is a fellow of the Nigerian Academy of Science, elected into the Academy’s Fellowship at its Annual General Meeting held in January 2015. He was 11th of Ahmadu Bello University from May 2009 to December 2009. He is a renowned scientist who through his study on the dissemination of rabies virus in tissues, developed the use of skin biopsy for in vitram diagnosis of rabies in 1983

Isaac Folorunso AdewoleFAS is a Nigerian professor of gynaecology and obstetrics. He was the former Nigerian minister of health from November 2015 - May 2019 Cabinet of President Muhammadu Buhari. He is a former vice-chancellor of the University of Ibadan and president of the African Organisation for Research and Training in Cancer. Prior to his appointment as the 11th substantive vice-chancellor of the university, he served as provost at the College of Medicine, University of Ibadan, the largest and oldest medical school in Nigeria. His research interest is in the area of human papillomavirus, HIV, and gynaecologic oncology, a specialised field of medicine that focuses on cancers of the female reproductive system, including ovarian cancer, uterine cancer, vaginal cancer, cervical cancer, and vulvar cancer. Adewole is a member of the governing council of Adeleke University and chairs the National Panel on Cervical Cancer Control Policy. He is the only Nigerian professor appointed as member of the Council of the Association of Commonwealth Universities. He was appointed to serve as a member of the international advisory board of the African Cancer Institute, a comprehensive cancer centre in sub-Saharan black Africa. 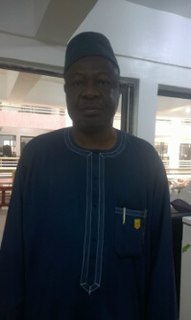 Professor Frank Nwachukwu Ndili was the 7th Vice Chancellor of the University of Nigeria, Nsukka, and served from 1980 until he was succeeded by professor Chimere Ikoku in 1985. He left the office after a long and controversial investigation by the panel of inquiry. However, he is believed to have been forthright even where his predecessor Umaru Shehu (1978-1979) threaded carefully. Prof Frank Nwachukwu Ndili is one of the eminent scientists Nigeria has ever produced. He is not only a scientist, he is a teacher, a top administrator and a positive strategist.

Salihu Mustafa, FNSE, FAENG, FNAHS, FAS, is a Nigerian academic, Professor of civil engineering and former Vice-Chancellor of Federal University of Technology Yola (FUTY), Yola, Adamawa State, Nigeria. He has taught in many universities in Nigeria and is currently a visiting Professor to Kebbi State University of Science and Technology, Aliero and Usmanu Danfodiyo University, Sokoto. He is married to Hajiya Fatima and they have four children.