Last updated September 20, 2021
Goddess of fertility in Turkic mythology and Tengriism
This article is about the goddess. For the legendary bird, see Huma bird. For the Tibetan script, see Umê script. For the villages in Iran, see Umay, Iran.

In Turkic mythology, earth was considered a "mother" symbolically. The Turkic root umāy originally meant 'placenta, afterbirth', and this word was used as the name for the goddess whose function was to look after women and children, possibly because the placenta was thought to have magic qualities. [2] In Mongolian, Umai means 'womb' or 'uterus'. In Old Turkic and modern-day Turkmen, the word “eje” means 'mother', [3] in Mongolian, "eje" or "eej" literally means "mother" aswell.[ clarification needed ]

The name appeared in the 8th-century inscription of Kul Tigin in the phrase Umay teg ögüm katun kutıŋa 'under the auspices of my mother who is like the goddess Umay'.

Umay is a protector of women and children. The oldest evidence is seen in the Orkhon script monuments. From these it is understood that Umay was accepted as a mother and a guide. Also, khagans were thought to represent Kök Tengri. Khagan wives, katuns or hatuns, were considered Umays, too. With the help of 'Umay, katuns had babies, and these babies were the guarantee of the empire. According to Divanü Lügat’it-Türk, when women worship Umay, they have male babies. Turkic women tie strings attached with small cradles to will a baby from Umay. This belief can be seen with the Tungusic peoples in Southern Siberia and the Altay people. Umay is always depicted together with a child. There are only rare exceptions to this. It is believed that when Umay leaves a child for a long time, the child gets ill and shamans are involved to call Umay back. The smiling of a sleeping baby shows Umay is near it and crying means that Umay has left.

In the view of the Kyrgyz people, Umay not only protects children, but also Turkic communities around the world. At the same time Umay helps people to obtain more food and goods and gives them luck.

As Umay is associated with the sun, she is called Sarı Kız 'Yellow Maiden', and yellow is her colour and symbol. She is depicted as having sixty golden tresses that look like the rays of the sun. She is thought to have once been identical with Ot Ene of the Mongols and Altay. Umay and Ece are also used as female given names in the Republic of Turkey. 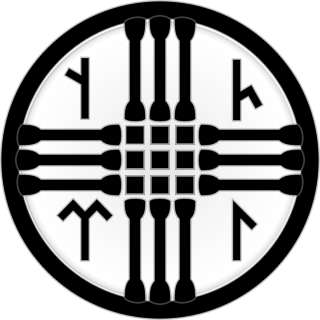 Tengri is one of the names for the primary chief deity of the early Turkic and Mongolic peoples.

Ilterish Khaghan was the founder of the Second Turkic Khaganate.

Bai-Ülgen or Ülgen is a Turkic and Mongolian creator-deity, usually distinct from Tengri but sometimes identified with him in the same manner as Helios and Apollo. His name is from Old Turkic bay, "rich", and ülgen, "magnificent". Ülgen is believed to be without either beginning or end.

Bai Baianai is the Yakut spirit of forests, animals and patron of hunters.Hunters light fires and pray that their work will pass fertile and without accidents. In some cultures, she protects children. She is considered a protector of the lineage.

Etügen Eke is a Mongolian and Turkic earth goddess. She was believed to be perpetually virginal. In Mongolian language, the word "etugen" associates with woman and daughter of Kayra. Also her name may originated from Ötüken, the holy mountain of the earth and fertility goddess of the ancient Turks. Medieval sources sometimes pair Etugen with a male counterpart named Natigai or Nachigai, although this is probably a mistake based on a mispronunciation of Etugen. In Mongol mythology Etugen is often represented as a young woman riding a grey bull.

Od iyesi is the Turkic and Mongolian spirit or deity of fire. In Turkic languages, Od means fire, and iye is the familiar spirit of any natural asset, literally meaning "master" or "possessor." Od iyesi protects the fire.

Turkic mythology features Tengriist and Shamanist strata of belief along with many other social and cultural constructs related to the nomadic existence of the Turkic peoples in early times. Later, especially after the Turkic migration, some of the myths were embellished to some degree with Islamic symbolism. Turkic mythology shares numerous points in common with Mongol mythology and both of these probably took shape in a milieu in which an essentially nationalist mythology was early syncretised with elements deriving from Tibetan Buddhism. Turkic mythology has also been influenced by other local mythologies. For example, in Tatar mythology elements of Finnic and Indo-European mythologies co-exist. Beings from Tatar mythology include Äbädä, Alara, Şüräle, Şekä, Pitsen, Tulpar, and Zilant. The early Turks apparently practised all the then-current major religions, such as Buddhism, Christianity, Judaism and Manichaeism, before the majority converted to Islam; often syncretising these other religions into their prevailing mythological understanding.

Tengrism is an ancient ethnic and state Turko-Mongolic religion originating in Central Asia and the Eurasian steppes, based on folk shamanism, monotheistic at the imperial level, and generally centered around the titular sky god Tengri. The term also describes several contemporary Turko-Mongolic native religious movements and teachings. All modern adherents of "political" Tengrism are monotheists. 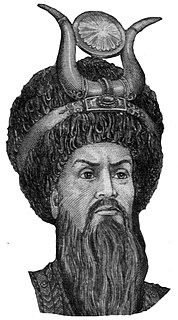 Oghuz Khagan or Oghuz Khan is a legendary khan of the Turkic people and an eponymous ancestor of Oghuz Turks. Some Turkic cultures use the legend of Oghuz Khan to describe their ethnic origins. The various versions of the narrative preserved in many different manuscripts has been published in numerous languages as listed below in the references. The narrative is often entitled Oghuznama, or narrative of the Oghuz.

Koyash (Orkhon:𐰸𐰆𐰖𐰽𐰴) is the god of sun in Turkic mythology.

Yel iyesi is the Turkic spirit or deity of wind. The name comes from the Turkic words "Yel," which means wind, and "iye," the familiar spirit of any natural asset.

Szélanya is the Hungarian goddess or deity of wind.

Szélatya or Szélkirály is the Hungarian god or deity of wind.

Burkut is the eagle god in Turkic mythology.

İye is a spirit in Turkic mythology who is a guardian, patron or protector of a place, person, lineage, nation, natural assets or an animal. Although such spirits are called "masters" or "posessors", they are not necessarily subject to worship.

Yer iyesi is the Turkic / Mongolian spirit or deity of earth or territory. In Turkic languages Yer means land or earth. And İye is the familiar spirit of any natural asset. Yer iyesi protects the earth or any region. Also known as Toprak iyesi.

Payna or Paynaqan is a winter feast and festival Turkic and Altai folklore. Arranged for the goddess that called Payna. So this is a blessing, fertility and abundance ceremony.

Al Ana is a female fatal spirit or demon in Turkic folklore. Al Ana was said to live in thickets near rivers, streams and lakes.