He trained under Cesare Tallone and Ponziano Loverini at the Accademia Carrara, then at the Scuola d’arte Andrea Fantoni. He then worked under Fermo Taragni. In 1907, he helped fresco the ceiling of the church of Sant’Antonio Abbandonato, near Val Brembilla.

Nicknamed Tiepolino for his rapid fresco execution, he was active in Liguria and Switzerland. He helped found in 1913 the Società degli acquafortisti bergamaschi, and in 1938 made designs for the windows of the Sanctuary of Pompei. [1] He also painted for the church of San Vittore, Calcio.

Girolamo Romani (Romanino) was an Italian High Renaissance painter active in the Veneto and Lombardy, near Brescia. His long career brought forth several different styles.

Piazza Colonna is a piazza at the center of the Rione of Colonna in the historic heart of Rome, Italy. It is named for the marble Column of Marcus Aurelius, which has stood there since AD 193. The bronze statue of Saint Paul that crowns the column was placed in 1589, by order of Pope Sixtus V. The Roman Via Lata runs through the piazza's eastern end, from south to north.

Domenico Maria Canuti was an Italian painter of the Baroque period, active mainly in Bologna and Rome. He was a major painter of fresco decorations. His ceiling decorations showed a mix of Bolognese and Roman influences.

Domenico Corvi (1721–1803) was an Italian painter at the close of the 18th century, active in an early Neoclassic style in Rome and surrounding sites.

Francesco Curradi or Currado was an Italian painter of the style described as Counter-Maniera or Counter-Mannerism, born and active in Florence.

Cesare Nebbia (c.1536–c.1622) was an Italian painter from Orvieto who painted in a Mannerist style. 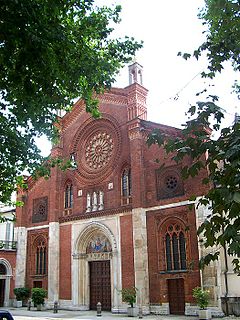 San Marco is a church in Milan, northern Italy.

Tomasso Sandrino (1575–1631) was an Italian painter of quadratura in Northern Italy, active in his native Brescia.

Leonida Bissolati was a leading exponent of the Italian socialist movement at the turn of the nineteenth century. 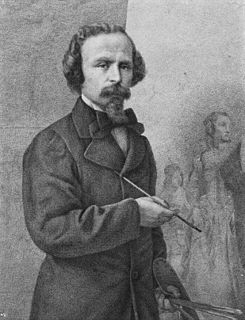 Francesco Coghetti was an Italian painter and art school administrator.

Jacopo Guarana was a Venetian painter of the late Baroque period who was born in Verona. He was active mainly in Venice and its mainland territories. 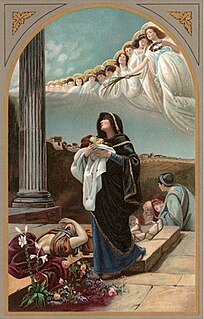 Ponziano Loverini was an Italian painter, known primarily for his canvases and frescoes of sacred subjects.

The Collegiate Church of St Florentius is a Gothic style, Roman Catholic collegiate, now parish church, in Fiorenzuola d'Arda, in the Province of Piacenza, region of Emilia-Romagna, Italy.

Giuseppe Roncelli (1661–1729) was an Italian painter and priest of the late Baroque. He was active in Bergamo and Crema.

Paolo Antonio Gualdo Lodrini was an Italian painter, mainly active in Bergamo as a painter of sacred subjects during the Rococo or late-Baroque period.

Cesare Maffei was an Italian painter of the Neoclassical period, active in Tuscany.

Francesco Parisi was an Italian-Argentine painter.