Umerkot [lower-alpha 1] (Urdu : عُمَركوٹ‎, Dhatki عُمَركوٹ), Sindhi (عمرڪوٽ) formerly known as Amarkot, [1] is a city in Umerkot District in the Sindh province of Pakistan. The city was the birthplace of the Mughal Emperor Akbar.

The local language is Dhatki, which is one of the Rajasthani languages of the Indo-Aryan language family. It is most closely related to Marwari. Sindhi, Urdu and Punjabi are also understood by the citizens.

The city is named by its Hindu founder Maharaja Amar Singh, [2] who originally built the Amarkot Fort here. [2] The name of the city was later changed after a local Ruler of Sindh Umer Soomro of the Umar Marvi story which also appears in Shah Jo Risalo and is one of the popular tragic romances from Sindh. [2]

Umerkot province was ruled by Sodha Rajput clan of Hindu Rajputs from medieval times until 1947 Partition of British India. The city held prominence during the Mughal Empire and the British Raj. Mughal Emperor Akbar was born in Amarkot 14 October 1542 when his father Humayun fled from the military defeat at the hands of Sher Shah Suri. [3] Rana Parshad, the Sodha Rajput ruler of Umarkot, gave him refuge. [4] Later on, Akbar brought northwestern India, including modern day Pakistan under Mughal rule.

Marvi of Umar Marvi love saga was kept here at Amarkot fort. Its ruler Rana Ratan Singh was hanged by the British at this fort for standing up for the rights of the Sindhis.

Umerkot was annexed by Jodhpur State in the 18th century and its rulers were reduced to Vassals. Umerkot and its fort was later handed to the British in 1847 by the Maharaja of Jodhpur in return for reducing the tribute imposed on Jodhpur State by Rs.10,000. [5] Due to this the Rana of Umerkot did not have much say in whether to join India or Pakistan, although he expressed his desire to join Pakistan because of his Sindhi roots. Umerkot was the only state with a Hindu majority and a Hindu King, that acceded to Pakistan. Rana Chandra Singh, a federal minister and the chieftain of the Hindu Sodha Thakur Rajput clan and the Umerkot Jagir, was one of the founder members of Pakistan Peoples Party (PPP) and was elected to the National Assembly of Pakistan from Umarkot, seven times with PPP between 1977 and 1999, when he founded the Pakistan Hindu Party (PHP). [6] [7] [8] Currently, his politician son Rana Hamir Singh is the 26th Rana of Tharparkar, Umarkot and Mithi. [9] [10]

The city is well connected with the other large cities like Karachi, the provincial capital and Hyderabad. [11]

Umarkot has many sites of historical significance such as Akbar's birthplace, Umarkot, Umerkot Fort and Momal Ji Mari.

The story of Umar Marvi is that Marvi was a young Thari girl abducted by then-ruler, Umar, who wanted to marry her because of her beauty. Upon her refusal, she was imprisoned in the historic Umerkot Fort for several years. Because of her courage, Marvi is regarded as a symbol of love for one's soil and homeland.

The city has more than 100 schools, 20 colleges, and one polytechnic college.

Nasir-ud-Din Muḥammad, better known by his regnal name, Humayun, was the second emperor of the Mughal Empire, who ruled over territory in what is now Afghanistan, Pakistan, Northern India, and Bangladesh from 1530–1540 and again from 1555–1556. Like his father, Babur, he lost his kingdom early but regained it with the aid of the Safavid dynasty of Persia, with additional territory. At the time of his death in 1556, the Mughal Empire spanned almost one million square kilometres.

Nagaur (Nāgaur) is a city in the state of Rajasthan in India. It is the administrative headquarters of Nagaur District. The Nagaur city lies about midway between Jodhpur and Bikaner.

Dhatki, also known as Dhatti or Thari, is one of the Rajasthani languages of the Indo-Aryan branch of the Indo-European language family. It is most closely related to Marwari.

Maldev Rathore was an Indian ruler of Marwar, which was later known as Jodhpur. He was a scion of the Rathore clan. His father was Rao Ganga Ji and his mother was Rani Padmavati of Sirohi. Rao Maldev fought in the Battle of Khanwa as a young prince, the defeat at Khanwa greatly weakened all the Rajput kingdoms in India, but Marwar under Maldev's capable rule turned into a powerful Rajput Kingdom that resisted foreign rule and challenged them for northern supremacy. Maldev refused to ally with either the Sur Empire or the Mughal Empire after Humayun regained control of north India in 1555. This policy was continued by his son and successor Chandrasen Rathore.

Umerkot District, is a district of Sindh province, Pakistan. The city of Umerkot is the capital of the district.

Nagarparkar (Urdu: نگرپاركر‎, Sindhi: ننگرپارڪر‎, is a taluka in at the base of the Karoonjhar Mountains in Tharparkar District in Sindh province of Pakistan that is known for the ancient Nagarparkar Temples and the Churrio Jabal Durga Mata Temple. Located at a distance of 129 km from Mithi, in Sindh, Pakistan. 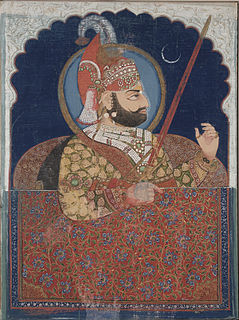 Mithi, is a Taluka and the capital of Tharparkar District in the Sindh province of Pakistan. It became the capital of the Tharparkar District in 1990, after the area's separation from Mirpur Khas. Mithi is one of the very few region in Pakistan where Muslims do not form a majority. More than 80% of the population in this region belong to the Hindu community. Both Hindus and Muslims reportedly live peacefully and there has been no reports of religious intolerance.

Umar Marvi or Marui, , is a folktale from Sindh, Pakistan about a village girl Marvi Maraich, who resists the overtures of a powerful King and the temptation to live in the palace as a queen, preferring to be in simple rural environment with her own village folk.

Hamida Banu Begum was a wife of the second Mughal emperor Humayun and the mother of his successor, the third Mughal emperor Akbar. She is also known by the title Maryam Makani, which was given to her by her son, Akbar.

Rana Chandra Singh, also known as Rana Chandar Singh, was a Pakistani politician and a federal minister. He was one of the founder members of Pakistan Peoples Party (PPP) and was elected to the National Assembly of Pakistan from Umerkot, seven times with PPP between 1977 and 1999, when he founded the Pakistan Hindu Party (PHP).

Ram Singh Sodha is a former Pakistani Hindu politician. A member of the opposition Pakistan Muslim League (Q), he held a seat reserved for non-Muslims in the Provincial Assembly of Sindh, but in 2011 resigned and moved to India.

Umarkot Fort, is a fort located in Umerkot, Sindh, also called Amarkot, Emperor Akbar was born in Umarkot Fort when his father Humayun fled from the military defeats at the hands of Sher Shah Suri on 15 October 1542. Rana Parasad of Umarkot, who had risen to power had given refuge to Mughal Emperor Humayun and it was there Hamida Bano Begum gave birth to young Akbar. Later the Mughal Emperor Akbar became the Shahenshah of Hindustan and was a popular figure with both Hindus and Muslims. Umerkot has many sites of historical significance such as Mughal emperor Akbar's birthplace near to Umarkot Fort, currently King Akbar birthplace is an open land. In 1746, the Mughal Subahdar, Noor Mohammad Kalhoro, built a fort at the location. Later the British would take over that area. 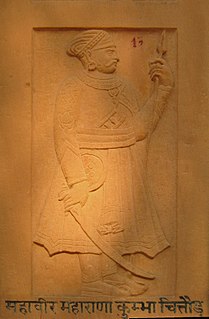 Before the Muslim conquests in the Indian subcontinent, much of northern and western India was being ruled by Rajput dynasties. The Rajput kingdoms contended with the rising and expansionist empires of the Muslim world, be they Arabs, Turks, Pashtuns or Mughals. The Rajputs held out against the Caliphates and Central Asian empires for several centuries. A few of Rajput kings converted to Islam, some formed alliance with the Mughals, which laid the foundations for the creation of the multi-ethnic Mughal Dynasty.

Kertee is a village in Tharparkar District, Sindh, Pakistan, located 21 kilometers to the south of Mithi city, also known as Kertigarh under the rule of the Makwana clan, It was known as Karli Nagar in Gujarati language. The village Kertee is majorily populated of Rajputs and some other castes are also inhabitant there, such as Sodha, Mahar, Meghwar, Bheel, Bhatti Rajput, Jadeja, Suther and some houses of Manghniyar Muslims. Apart from its historical background, Kertee is also famous for an ancient well, about which locals say, is 5000 years old. Stories mention that this well was constructed by the Pandavas during their exile of 14 years. There are also temples of some common deities like as Oghar Nath, Pir Pithora, Pir Bhavsingh, Mard Ali Shah, Mauji, Mataji and three other temples of Lord Shiva and one temple of Lord Krishna.

Rana Ratan Singh was ruler of Umerkot belonging to Sodha subclan of Rajputs. Rana had rebelled against British rule, he was charged for treason and was hanged in Umarkot Fort by the British in the 1850s.

Rana Parshad aka Rana Patta was 18th king of Amarkot(Umerkot)(1530/1556). Who gave refugee to Mughal king Humayun when we has defeated by Sher Shah Suri and nobody was offering him refugee because every kingdom was frightened of Sher Shah Suri.