The shrine is venerated as the legendary place where Empress Jingū safely gave birth to the future Emperor Ōjin, and is still patroned by those praying for safe childbirth and smooth child rearing.

The cluster of giant camphor trees called Kada’s Forest [1] (including the two old camphors that have been deemed Natural Treasures, "Yufuta’s Forest" and "Kinukake’s Forest").

Emperor Chūai, also known as Tarashinakatsuhiko no Sumeramikoto (足仲彦天皇) was the 14th Emperor of Japan, according to the traditional order of succession. Both the Kojiki, and the Nihon Shoki record events that took place during Chūai's alleged lifetime. Chūai is the first monarch to ascended the throne who was not a son of the previous Emperor as the latter's only child died young. He is also noted for having his capital in Kyushu, rather than Yamato like his predecessors. The records state that Chūai had a wife named Okinagatarashihime-no-Mikoto, and 2 consorts that all bore him 4 children. 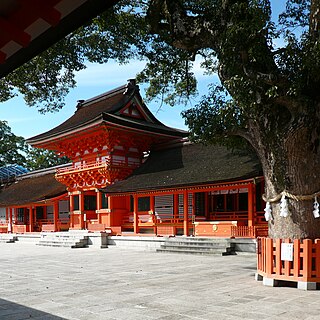 In Japanese beliefs, Hachiman is the syncretic divinity of archery and war, incorporating elements from both Shinto and Buddhism. Although often called the god of war, he is more correctly defined as the tutelary god of warriors. He is also the divine protector of Japan, the Japanese people and the Imperial House, the Minamoto clan ("Genji") and most samurai worshipped him. The name means "God of Eight Banners", referring to the eight heavenly banners that signaled the birth of the divine Emperor Ōjin. His symbolic animal and messenger is the dove. 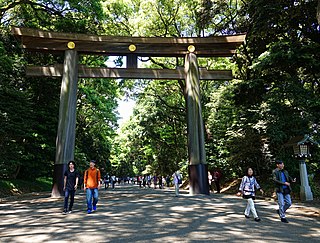 Meiji Shrine, located in Shibuya, Tokyo, is the Shinto shrine that is dedicated to the deified spirits of Emperor Meiji and his wife, Empress Shōken. The shrine does not contain the emperor's grave, which is located at Fushimi-momoyama, south of Kyoto. 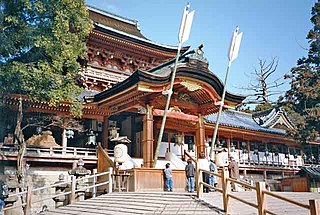 Suijin is the Shinto god of water in Japan. The term Suijin refers to the heavenly and earthly manifestations of the benevolent Shinto divinity of water. However, it also refers to a wide variety of mythological and magical creatures found in lakes, ponds, springs and wells, including serpents, eels, fish, turtles, and the flesh-eating kappa. As Mizu no Kamisama, Mizugami, or Suijin, this kami is widely revered in Japan, being a big part of Japanese culture, and is often worshiped in temples. Suijin is also known as the Water god, Suiten (水天) and Sui-ō/Suiu (水王). 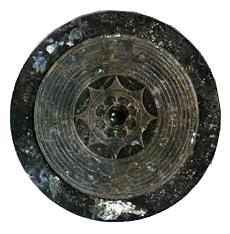 Yata no Kagami (八咫鏡) is a sacred mirror that is part of the Imperial Regalia of Japan. It is said to be housed in Ise Grand Shrine in Mie Prefecture, Japan, although a lack of public access makes this difficult to verify. The Yata no Kagami represents "wisdom" or "honesty," depending on the source. Its name literally means "The Eight Ta Mirror," a reference to its size and octagonal shape. Mirrors in ancient Japan represented truth because they merely reflected what was shown, and were a source of much mystique and reverence. Japanese folklore is rich in stories of life before mirrors were commonplace. 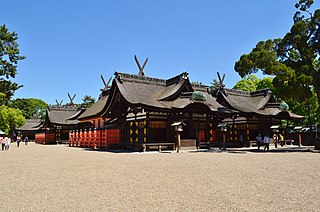 Sumiyoshi-taisha (住吉大社), also known as Sumiyoshi Grand Shrine, is a Shinto shrine in Sumiyoshi-ku, Osaka, Osaka Prefecture, Japan. It is the main shrine of all the Sumiyoshi shrines in Japan. However, the oldest shrine that enshrines the Sumiyoshi sanjin, the three Sumiyoshi kami, is the Sumiyoshi Shrine in Hakata.

Usa Jingū (宇佐神宮), also known as Usa Hachimangū (宇佐八幡宮), is a Shinto shrine in the city of Usa in Ōita Prefecture in Japan. Emperor Ojin, who was deified as Hachiman-jin, is said to be enshrined in all the sites dedicated to him; and the first and earliest of these was at Usa in the early 8th century. The Usa Jingū has long been the recipient of Imperial patronage; and its prestige is considered second only to that of Ise. 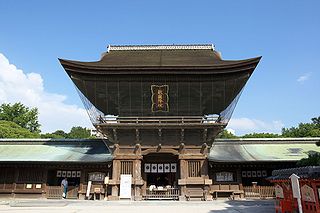 Hakozaki Shrine is a Shintō shrine in Fukuoka. 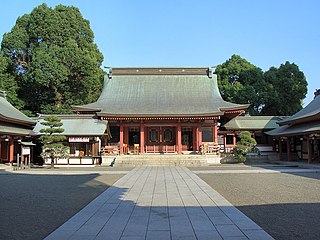 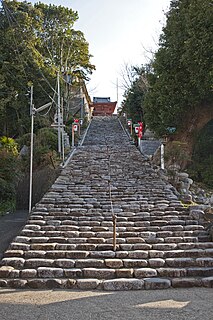 Isaniwa Shrine is a Shinto shrine in Matsuyama, Ehime Prefecture, Japan. Enshrined are Emperor Chūai, Empress Jingū, and Emperor Ōjin. A number of its buildings and treasures have been designated Important Cultural Properties. 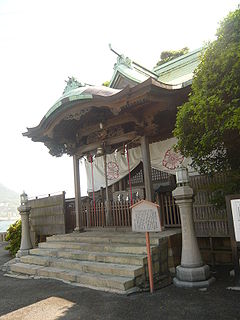 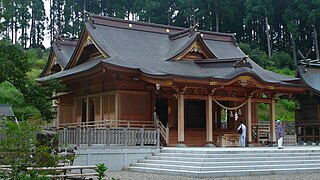 Kota-jinja (巨田神社) is a Shinto shrine located in Miyazaki, Miyazaki Prefecture, Japan. It is dedicated to Futodama, Empress Jingū and Emperor Ōjin. 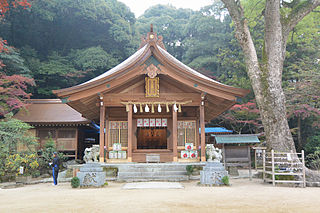 Kehi Shrine is a Shinto shrine in the city of Tsuruga, Fukui Prefecture, Japan. In the former Modern system of ranked Shinto Shrines, it was a national shrine of the 1st rank, and the ichinomiya of Echizen Province. Its main festival is held annually on September 4. The shrine is considered the chief guardian shrine of the Hokuriku region. 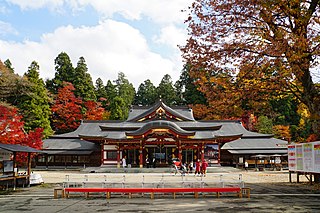 Morioka Hachimangū (盛岡八幡宮) is a Shinto shrine in the city of Morioka, Iwate in northern Japan. The shrine is noted for its annual festival on the second Saturday in June, which is famous for the Chagu Chagu Umakko, a horse parade which was recognized in 1978 as an Intangible Folk Cultural Property. In 1996 the sound of the bells of the Chagu Chagu Umakko was selected by the Ministry of the Environment as one of the 100 Soundscapes of Japan. The shrine is also noted for its displays of yabusame horse archery during its annual festival on September 15. 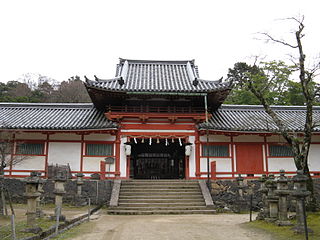 Tamukeyama Hachiman Shrine is a Shinto shrine near Tōdai-ji, Nara, Nara Prefecture, Japan. It is a Hachiman shrine, dedicated to the kami Hachiman. It was established in 749. Kami enshrined here include Emperor Ojin, Emperor Nintoku, Empress Jingū and Emperor Chūai in addition to Hachiman. 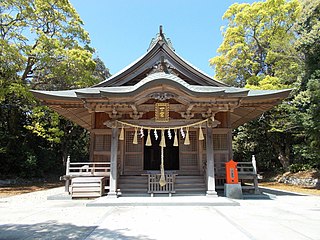