She was born in Medina shortly after her father's death. While declaring his will, he informed his daughter Aisha that some palm trees that he had given her should be given as inheritance to her two brothers and two sisters. She readily accepted her father's wishes but asked to which other sister he was referring besides Asma. He told her that Habiba was pregnant and that he suspected it to be a girl. [1]

Umm Kulthum was raised under the supervision of her sister Aisha "with kindness and gentleness". When Umar asked for Umm Kulthum's hand in marriage, Aisha refused consent. Her emissary explained to the Caliph: "You are rough and ready. How will it be with Umm Kulthum if she disobeys you and you beat her? You will have taken Abu Bakr's place in a way that does not suit you." [2]

Umm Kulthum married her father's cousin Talha ibn Ubayd-Allah, who was some forty years older than herself. She gave birth to Zakariyyah, Yusuf (who died in infancy) and Aisha. [3] Talha was killed at the Battle of the Camel in 656. Umm Kulthum then accompanied Aisha on a pilgrimage to Mecca while she was still in her waiting period. [3]

Aisha sent Salim, a grandson of Umar to her sister Umm Kulthum when he was of suckling age, with the instruction to breastfeed him ten times so that Aisha would be considered his foster-aunt, but she fell ill after she nursed him three times. [4] So the foster-relationship was therefore incomplete, and Salim did not become eligible to see Aisha unveiled. [5]

Umm Kulthum was a successor. She narrated hadith from Aisha, of which some were collected by al-Bukhari, Muslim, al-Nasa'i and Ibn Majah. [6]

Muhammad's wives were the women married to the Islamic prophet Muhammad. Muslims use the term "Ummahat-ul-Momineen" meaning "Mothers of the Believers" prominently before or after referring to them as a sign of respect, a term derived from Quran 33:6.

Muhammad ibn Abi Bakr was the youngest son of Rashidun Caliph Abu Bakr. He was not a companion of the Islamic prophet Muhammad but a Tabi'un. His mother was Asma bint Umais, who was a widow of Ja'far ibn Abi Talib prior to her second marriage with Abu Bakr. He became the adopted son of Caliph Ali, and became one of his generals.

'Abd al-Rahman ibn 'Awf was one of the companions of the Islamic prophet Muhammad. One of the wealthiest sahabas, he is known for being one of the Ten Promised Paradise.

Abdur-Rahman ibn Abi Bakr, was the eldest son of Abu Bakr, the first Caliph. His mother was Um Ruman bint Amir ibn Uwaymir ibn Zuhal ibn Dahman and he was the full brother of Aisha. He was born sometime between 595 to 605 CE. It is said that he had a good sense of humour.

Sa'īd ibn Zayd,, also known by his kunyaAbu'l-Aawar, was a companion of the Islamic prophet Muhammad.

Talhah ibn Ubayd-Allah was a companion of the Islamic prophet Muhammad. In Sunni Islam, he is mostly known for being of the Ten Promised Paradise. He is best known for his roles in the Battle of Uhud and the Battle of the Camel, in which he died. According to Sunnis he was given the title "The Generous" by Muhammad.

Safwan ibn Umayyah was a sahaba (companion) of the Islamic prophet Muhammad.

The Muhajirun were the first converts to Islam and the Islamic prophet Muhammad's advisors and relatives, who emigrated with him from Mecca to Medina, the event known in Islam as the Hijra. The early Muslims from Medina are called the Ansar ("helpers").

Salim ibn 'Abd-'Allâh ibn 'Umar ibn al-Khattâb was a well known narrator of hadith, many of which he related first hand from either his father, Abd-Allah ibn Umar, or his grandfather, the caliph Umar ibn al-Khattab. His paternal aunt was Hafsa bint Umar, one of Muhammad's wives.

Asim ibn Omar (628–689) was the son of Jamila bint Thabit and Omar, the second Rashidun caliph.

Az-Zubayr ibn Al-Awam was a cousin and companion of the Islamic prophet Muhammad and one of the first converts to Islam. He was also one of the ten companions whom Muhammad promised paradise. He became one of the political and military leaders of the community following the death of Muhammad. Az-Zubayr died in the Battle of the Camel. 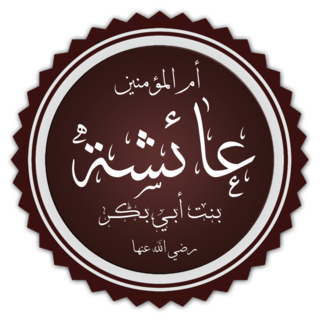 ʿĀʾishah bint Abī Bakr, also transcribed as Aisha or variants, was Muhammad's third and youngest wife. In Islamic writings, her name is thus often prefixed by the title "Mother of the Believers", referring to the description of Muhammad's wives in the Qur'an.

Abdullah ibn Omar ibn al-Khattab was companion of the Islamic prophet Muhammad and son of the second Caliph Omar. He was a prominent authority in hadith and law. He also fought alongside the likes of Khalid Ibn Walid in the army of the Rashidun caliphate against their adversaries such as the Byzantines.

Asmā' bint Abi Bakr, was one of the companions of the Islamic prophet Muhammad and elder sister of his wife Aisha. She is regarded as one of the most prominent islamic figures, as she helped the Prophet during his arduous hijra from Mecca to Medina.

The Battle of the Camel, also known as the Battle of Jamel or the Battle of Basra, took place at Basra, Iraq on 7 November 656. The battle was fought between Ali ibn Abi Talib, who was the cousin and son-in-law of the Islamic prophet, Muhammad, and A'isha, Talhah and Zubayr who led the campaign aiming to avenge the killing of the third caliph Uthman. Marking the second chapter of the First Fitna, the fateful battle ended with a victory for Ali. Naturally, the view of the event and the actors differs between the two major sects, Sunnis and Shias. The Sunnis hold that it was not the intention of either parties to engage in battle, and that the battle was an unforeseen consequence of interference from the rebels involved in the killing of Uthman. On the other hand, the Shia believe the killing of Uthman was a pretext for Aisha and her followers to wage war against Ali.

Kulthum bint Muhammad, also known as Umm Kulthum was the third daughter of the Islamic prophet Muhammad by his first wife Khadijah bint Khuwaylid. She was also the wife of Uthman, the Third Caliph of the Rashidun Caliphate.

Umm Kulthum bint Jarwal, also known as Mulayka, was a wife of Omar and a companion of the Islamic prophet Muhammad.

Qurayba "the Younger" bint Abi Umayya, a companion of the Islamic prophet Muhammad, was in succession a wife of Omar, the second Caliph and of Muawiyah.