Delon had previously worked with Melville on Le Samouraï (1967) and Le Cercle Rouge (1970), playing the role of a criminal. In Un Flic, Delon's role is reversed. He plays the cop, Édouard Coleman, in pursuit of Simon, a notorious Paris thief who is very hard to pin down.

The movie opens with a quote from Eugène-François Vidocq: "The only feelings mankind has ever inspired in policemen are those of indifference and derision..."

Following a raid on a bank in a seaside town, four Parisian gangsters flee after a cashier sets off the alarm with only part of the loot and with one of the men, Marc Albois, wounded by the cashier, who Marc then shoots dead. They put Marc in a private clinic and disperse. Their leader, Simon, owns a nightclub that is visited regularly by police detective Coleman to keep an eye on Simon and pick up information. Coleman also hopes to see the beautiful Cathy, who is Simon's mistress but spends occasional afternoons with Coleman in a hotel room. Fearing police will find and question Marc, Simon sends Cathy into the clinic dressed as a nurse to give the dying man a fatal air embolism after an attempt to take him away fails.

Simon's next project is to steal a large quantity of heroin being transported out of France by a rival gang on the night express from Paris to Lisbon. From a helicopter, he is lowered onto the speeding train in the empty countryside south of Bordeaux, breaks into the courier's sleeping compartment, neutralizes him with chloroform, and is successfully winched up with the drugs. Knowing the dead Marc was friends with Louis Costa, Coleman arrests him and gets him to confess the names of his accomplices.

Coleman goes to the club and questions Simon, who denies he knows Marc or Louis. Simon immediately telephones the fourth member of the gang, Paul, a former bank manager, to warn him, but the police arrive before he can flee and Paul shoots himself.

Simon hides out in a hotel and rings Cathy to pick him up. However, police have tapped Cathy's phone and, as Simon emerges from the hotel carrying an attaché case full of heroin, the waiting Coleman draws a gun and challenges him. As Simon seems to be reaching inside his coat for a gun, Coleman shoots him dead while Cathy watches helplessly from her car. However, when Coleman inspects Simon's body, he finds he had no gun, leading him to think it was suicide by cop. Coleman is called away on another case, leaving a pensive Cathy alone. The film ends with a prolonged shot on Coleman's face as he drives away. 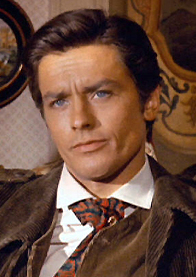 Alain Fabien Maurice Marcel Delon is a French actor and businessman. He is known as one of Europe's most prominent actors and screen sex symbols from the 1960s and 1970s. He achieved critical acclaim for roles in films such as Rocco and His Brothers (1960), Plein Soleil (1960), L'Eclisse (1962), The Leopard (1963), The Yellow Rolls-Royce (1965), Lost Command (1966), and Le Samouraï (1967). Over the course of his career Delon worked with many well-known directors, including Luchino Visconti, Jean-Luc Godard, Jean-Pierre Melville, Michelangelo Antonioni, and Louis Malle. He acquired Swiss citizenship in 1999.

Cop Shoot Cop was a rock music group founded in New York City in 1987. They disbanded in 1996. The band were frequently classified as industrial rock, but were often quite different from many bands so dubbed: having a distinctive instrumental lineup that encompassed twin bass guitars, found metal percussion, and no lead guitar. The group had little mainstream success, despite tours with Iggy Pop and music videos on MTV's Headbangers Ball and 120 Minutes. They retain a cult following--their out-of-print releases sometimes sell for large amounts. 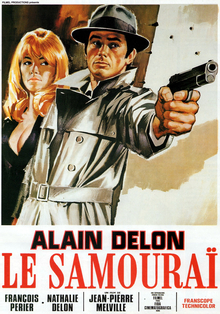 Le Samouraï, is a 1967 neo-noir crime film written and directed by Jean-Pierre Melville. The film follows a professional hitman named Jef Costello who is seen by witnesses and his efforts to provide himself an alibi that drive him further into a corner. The film stars Alain Delon, François Périer, Nathalie Delon and Cathy Rosier.

French Connection II is a 1975 American action thriller film starring Gene Hackman and directed by John Frankenheimer. It is a fictional sequel to the initially true story of the 1971 Academy Award winning picture The French Connection. The film expands on the central character of Det. Jimmy "Popeye" Doyle who travels to Marseille, France where he is attempting to track down French drug-dealer Alain Charnier, who escaped at the end of the first film. Hackman won an Academy Award for Best Actor for the original The French Connection and he and Fernando Rey are the only returning cast members.

Bob le flambeur is a 1956 French gangster film directed by Jean-Pierre Melville. The film stars Roger Duchesne as Bob. It is often considered a film noir and precursor to the French New Wave because of its use of handheld camera and a single jump cut.

Le Cercle Rouge is a 1970 Franco-Italian crime film set mostly in Paris. It was directed by Jean-Pierre Melville and stars Alain Delon, Andre Bourvil, Gian Maria Volonté, François Périer and Yves Montand. It is known for its climactic heist sequence which is about half an hour in length and has almost no dialogue.

Flic Story is a French crime thriller released on October 1, 1975, based on the autobiography of the same name written by French police detective Roger Borniche. Both film and book portray Borniche's nine-year pursuit of French gangster and murderer Emile Buisson, who was executed on February 28, 1956. Directed by Jacques Deray, the film stars Alain Delon and Jean-Louis Trintignant as Borniche and Buisson respectively, supported by Claudine Auger and André Pousse. 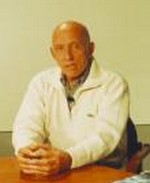 José Giovanni was the pseudonym of Joseph Damiani, a French writer and film-maker of Corsican origin who became a naturalized Swiss citizen in 1986. 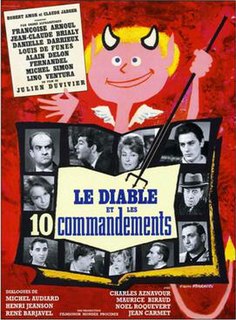 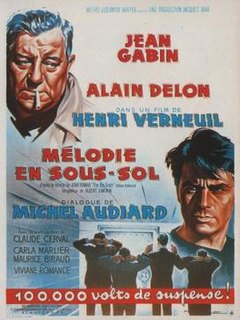 Any Number Can Win is a 1963 French crime drama film directed by Henri Verneuil. The film is based on the novel The Big Grab by Zekial Marko.

Christopher Frank was a British-born French writer, screenwriter, and film director. He won the 1972 Prix Renaudot for his novel La Nuit américaine that served the basis for Andrzej Zulawski's film That Most Important Thing: Love.

Icy Breasts is a 1974 French-Italian psychological thriller written and directed by Georges Lautner and starring Alain Delon. It is based on Richard Matheson's 1953 novel Someone is Bleeding.

Parole de flic is a 1985 French crime film directed by José Pinheiro and produced by and starring Alain Delon. It marked Delon's return to action films after a period devoted to more intimate films.