Una Vincenzo, Lady Troubridge (born Margot Elena Gertrude Taylor; 8 March 1887 – 24 September 1963) was a British sculptor and translator. She is best known as the long-time lesbian partner of Marguerite Radclyffe Hall, author of The Well of Loneliness .

Una Troubridge was an educated woman with achievements in her own right. Most notably she was a successful translator and introduced the French writer Colette to English readers. Her talent as a sculptor prompted Nijinsky to sit for her several times. [1]

Born Margot Elena Gertrude Taylor, she was the daughter of Harry Ashworth Taylor MVO , a Foreign Office official and son of Sir Henry Taylor, and Minna Gordon Handcock, granddaughter of Richard Handcock, 2nd Baron Castlemaine. [2] She was nicknamed Una by her family as a child and chose the middle name Vincenzo herself, after her Florentine relatives. [3] She was raised in Montpelier Square, in London's Knightsbridge district, and became a pupil at the Royal College of Art, and after she graduated set up a sculpture studio. Her father died in 1907, leaving her with limited financial support, and marriage became her best practical option.

She married Captain Ernest Troubridge in October 1908; they had one daughter, Andrea. [4] Ernest Troubridge rose to the rank of admiral during and immediately after the First World War, and Una gained her title when Admiral Troubridge was knighted in June 1919, although they were already legally separated at the time. [3]

She was a devoted admirer of the Italian-Russian operatic bass, Nicola Rossi-Lemeni [1920-1991], and followed his career all over the world. She later became a close friend of both Rossi-Lemeni and his wife, the soprano Virginia Zeani, and was godmother to their young son. [ citation needed ]

Hall and Troubridge met in 1915 as Troubridge's cousin, singer Mabel Batten (aka Ladye), was Hall's lover at the time. Batten died in 1916, and Hall and Troubridge moved in together the following year. In the early 1920s, Troubridge and Hall's home was at 10 Stirling Street, London, near where Troubridge had grown up. The property was extensively renovated by the two. [5] She wrote about the intensity of their relationship in her diary: "I could not, having come to know her, imagine life without her." [6] [7]

In an effort to ease the great sense of guilt about Mabel's death, Hall and Troubridge became interested in spiritualism. They regularly held séances with the use of a medium and believed that they received advice from Mabel, from beyond the grave. [8] Both Troubridge and Hall identified as "inverts", [9] a term used by sexologists such as Krafft-Ebing and Havelock Ellis usually to connote what is regarded as homosexuality.

The couple raised and showed dachshunds and griffons. The dachshunds shown in Romaine Brooks' portrait of Troubridge were a prize-winning pair given to her by Hall. [10] In the last nine years of her life, Hall had become obsessed with a White Russian nurse, Evgenia Souline, a relationship which caused Troubridge unhappiness, but which she nonetheless tolerated. Initially, the women had decided to move to Italy and live in Florence but were forced to return at the outbreak of WWII. The three chose to live in Devon.

Despite all their troubles, Troubridge stayed with Hall and nursed her until she died in 1943. In the early 1920s, Troubridge adopted a tailored style similar to Hall's own masculine look as a way of making her sexual identity and their partnership visible. Later she came to prefer more feminine dress that complemented Hall's. [11] After Hall died of bowel cancer in 1943, Troubridge had Hall's suits altered to fit her and wore them habitually. [12]

On her deathbed, Hall revoked a previous will that had provided Souline with an income, and instead left everything to Troubridge, including the copyrights to her works. In her new will, she asked Troubridge to "make such provision for our friend Eugenie Souline as in her absolute discretion she may consider right"; Troubridge provided Souline with only a small allowance. She burned Souline's letters. In her 1945 biography, The Life and Death of Radclyffe Hall, she minimized Souline's role in Hall's life. [13] Souline died in 1958.

Troubridge died in Rome in 1963. She left written instructions that her coffin be placed in the vault in Highgate Cemetery where Hall and Batten had been buried, but the instructions were discovered too late. [14] She is buried in the Campo Verano Cemetery in Rome, and on her coffin is inscribed "Una Vincenzo Troubridge, the friend of Radclyffe Hall". [ citation needed ]

Natalie Clifford Barney was an American playwright, poet and novelist who lived as an expatriate in Paris.

Marguerite Antonia Radclyffe Hall was an English poet and author, best known for the novel The Well of Loneliness, a groundbreaking work in lesbian literature. In adulthood, Hall often went by the name John, rather than Marguerite.

The Troubridge Baronetcy, of Plymouth, is a title in the Baronetage of Great Britain. It was created on 30 November 1799 for Captain Thomas Troubridge, a distinguished officer of the Royal Navy, who later became an admiral. The second baronet was also a Royal Navy admiral and sat as Member of Parliament for Sandwich. The third baronet fought with distinction in the Crimean War, in which he was severely wounded.

Romaine Brooks was an American painter who worked mostly in Paris and Capri. She specialized in portraiture and used a subdued tonal palette keyed to the color gray. Brooks ignored contemporary artistic trends such as Cubism and Fauvism, drawing on her own original aesthetic inspired by the works of Charles Conder, Walter Sickert, and James McNeill Whistler. Her subjects ranged from anonymous models to titled aristocrats. She is best known for her images of women in androgynous or masculine dress, including her self-portrait of 1923, which is her most widely reproduced work. 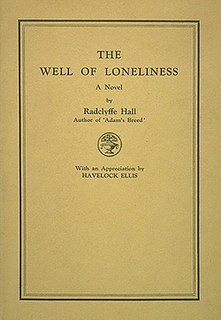 The Well of Loneliness is a lesbian novel by British author Radclyffe Hall that was first published in 1928 by Jonathan Cape. It follows the life of Stephen Gordon, an Englishwoman from an upper-class family whose "sexual inversion" (homosexuality) is apparent from an early age. She finds love with Mary Llewellyn, whom she meets while serving as an ambulance driver in World War I, but their happiness together is marred by social isolation and rejection, which Hall depicts as typically suffered by "inverts", with predictably debilitating effects. The novel portrays "inversion" as a natural, God-given state and makes an explicit plea: "Give us also the right to our existence".

Alice Frederica Keppel was a British society hostess and a long-time mistress and confidante of King Edward VII.

Ladies Almanack, its complete title being Ladies Almanack: showing their Signs and their Tides; their Moons and their Changes; the Seasons as it is with them; their Eclipses and Equinoxes; as well as a full Record of diurnal and nocturnal Distempers, written & illustrated by a lady of fashion, was written by Djuna Barnes in 1928. This roman à clef catalogues the amorous intrigues of Barnes' lesbian network centered in Natalie Clifford Barney's salon in Paris. Written as a winking pastiche of Restoration wit, the slender volume is illustrated by Barnes's Elizabethan-inspired woodcuts. 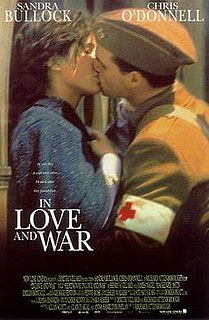 In Love and War is a 1996 romantic drama film based on the book, Hemingway in Love and War by Henry S. Villard and James Nagel. The film stars Sandra Bullock, Chris O'Donnell, Mackenzie Astin, and Margot Steinberg. Its action takes place during the First World War and is based on the wartime experiences of the writer Ernest Hemingway. It was directed by Richard Attenborough. The film was entered into the 47th Berlin International Film Festival.

Antoinette Corisande Élisabeth, Duchess of Clermont-Tonnerre was a French writer of the early 20th century, best known for her long-term lesbian relationship with Natalie Clifford Barney, an American writer. Élisabeth de Gramont had grown up among the highest aristocracy; when she was a child, according to Janet Flanner, "peasants on her farm... begged her not to clean her shoes before entering their houses". She looked back on this lost world of wealth and privilege with little regret, and became known as the "red duchess" for her support of socialism and feminism.

Flaming Page was a Canadian Thoroughbred who was a Champion racehorse and then an outstanding broodmare. She is best known as the dam of English Triple Crown winner Nijinsky. She was elected to the Canadian Horse Racing Hall of Fame in 1980.

Katharine Mary Adela Maddison, née Tindal, usually known as Adela Maddison, was a British composer of operas, ballets, instrumental music and songs. She was also a concert producer. She composed a number of French songs in the style of mélodies; for some years she lived in Paris, where she was a pupil, friend and possibly lover of Gabriel Fauré. Subsequently, living in Berlin, she composed a German opera which was staged in Leipzig. On returning to England she created works for Rutland Boughton's Glastonbury Festivals.

Diana Souhami is an English writer of biographies, short stories and plays. She is noted for her unconventional biographies of prominent lesbians.

Gabrielle Enthoven OBE was an English playwright, amateur actress, theatre archivist, and prolific collector of theatrical ephemera relating to the London stage. In 1911, Enthoven began campaigning for the establishment of a theatrical section in one of the British museums. In 1924, the Victoria and Albert Museum accepted her private collection, at this time containing over 80,000 theatrical playbills and programmes. The material became the founding collection of the museum's theatre and performance archives. Enthoven's unparalleled knowledge of the London stage and its history earned her the sobriquet 'the theatrical encyclopaedia'.

Una Mabel Bourne was an Australian pianist and composer.

Adam's Breed was a 1926 novel by the English writer Radclyffe Hall. On its publication it won the James Tait Black Memorial Prize for fiction and the Femina Vie Heureuse prize for best English novel. It tells the story of a British-Italian waiter, a member of the Lost Generation disillusioned by life during and after World War I, who becomes a hermit.

The Master of the House is a novel written by Radclyffe Hall and published in 1932 — her first published work after her 1928 The Well of Loneliness. It depicts the life of carpenter Christophe Benedit, as well as of the other inhabitants of the small French town of St-Loup-sur-Mer.

Laura Troubridge was a British diarist, letter-writer, artist and illustrator. A professional artist from an aristocratic background, she was known for her portraits of Queen Victoria and her family, and paintings of children and fairy subjects, generally in watercolour and pastel. Her book illustrations were admired by Oscar Wilde and Charles Dodgson. In 1966 her journals, giving an insight into Victorian life; and in 2000 correspondence with her fiancé during the period of their engagement, were published.