Unborn But Forgotten (Korean : 하얀방; RR : Hayanbang; lit. "White Room") is a 2002 South Korean film directed by Im Chang-jae. Due to its plot, the film has been compared to both The Ring and FeardotCom .

TV producer Han Su-jin investigates a string of mysterious deaths involving pregnant women after they have visited a website. Out of curiosity Han visits the website; later she starts to have bizarre hallucinations, suggesting that her death may be imminent. Han hires a detective named Choi to help her solve the mystery.

The song "Awen" written and performed by Irish duo RUA (Liz Madden and Gloria Mulhall) was used as the theme song for the main character. This song was taken from their first album RUA released by Celtic Collections.

Everybody Has Secrets is a 2004 South Korean romantic comedy film. It stars Lee Byung-hun, Choi Ji-woo, Kim Hyo-jin and Chu Sang-mi. Because it has several sex-scenes, it is generally restricted to viewers under 18 or 21. Although the film wasn't a particularly big hit in South Korea it grossed $4,888,679 in Japan.

Failan is a 2001 South Korean film written and directed by Song Hae-sung. The film was adapted from the Japanese novel Love Letter by Jirō Asada. It stars Choi Min-sik and Hong Kong actress Cecilia Cheung.

Ghost in Love is a 1999 South Korean film written by Li Hong-zhou and directed by Lee Kwang-hoon. The film stars Kim Hee-sun in the title role as the girlfriend of a man she suspects of cheating on her. She throws herself underneath an oncoming train, and discovers that in the afterlife she can roam as a ghost and take revenge, if she wants to, on her former boyfriend, who has quickly moved on. Lee Sung-jae also stars as Kantorates, a ghost who befriends the protagonist. The film was released on August 14, 1999.

Maundy Thursday is a 2006 South Korean film directed by Song Hae-sung based on a bestselling novel by Gong Ji-young. Starring Gang Dong-won and Lee Na-young, the film is about a convicted murderer awaiting execution, and the bond he forms with a suicidal young woman who starts visiting him in jail every Thursday.

Singles is a 2003 South Korean romantic comedy film starring Jang Jin-young, Uhm Jung-hwa, Lee Beom-soo, and Kim Joo-hyuk. It is based on the novel Christmas at Twenty-nine by Japanese writer Kamato Toshio. The film was one of the highest grossing Korean films of all time earning 2,203,164 admissions nationwide.

Over the Rainbow is a 2002 South Korean film starring Lee Jung-jae and Jang Jin-young.

The South Korea men's national volleyball team represents South Korea in international volleyball competitions and friendly matches. The Republic of Korea (ROK) has competed in the Olympic Games eight times, but has not featured since the Sydney 2000 Games. The country's best Olympic performance was fifth place at Los Angeles 1984. the team's best performance at the Olympic Games was a 5th place at the 1984 Games in Los Angeles, California, United States. The national team at the Asian Championship winner four gold medal in 1989 Seoul, 1993 Nakhon Ratchasima, 2001 Changwon and 2003 Tianjin. This performance did not come close to matching their best FIVB World Championship finish of fourth in 1978, when they lost to Cuba in the bronze medal match.

Dream (Korean: 드림) is a 2009 South Korean television series that follows the lives of a sports agent and K-1 fighters. Starring Joo Jin-mo, Kim Bum and Son Dam-bi, it aired on SBS from July 27 to September 29, 2009 on Mondays and Tuesdays at 21:55 for 20 episodes.

Happy Together is a 1999 South Korean television series starring Lee Byung-hun, Song Seung-heon, Kim Ha-neul, Jo Min-su, and Jun Ji-hyun It aired on SBS from June 16 to August 5, 1999 on Wednesdays and Thursdays at 21:55 for 16 episodes. Starring young actors who would go on to become Korean TV and film stars, the hit drama revolves around five children who were separated at the death of their parents, and the love, conflicts, and reconciliation that these siblings go through when they meet again as adults. 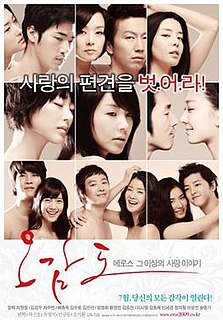 Five Senses of Eros is a 2009 South Korean omnibus film with five short films depicting love and desire, but in different styles and genres. The shorts are: His Concern, directed by Daniel H. Byun; I'm Right Here, directed by Hur Jin-ho; The 33rd Man, directed by Yoo Young-sik; In My End Is My Beginning, directed by Min Kyu-dong; and Believe in the Moment, directed by Oh Ki-hwan.

My Dear Desperado is a 2010 South Korean romantic comedy film written and directed by Kim Kwang-sik, and starring Park Joong-hoon and Jung Yu-mi as two people who become semi-basement one-room neighbors: brave yet jobless Se-jin and Dong-chul, the neighborhood gangster who always gets beaten up. The film received 688,832 admissions nationwide. This film was remade in Hindi titled Jayantabhai Ki Luv Story in 2013 starring Vivek Oberoi opposite Neha Sharma in lead roles. The movie was officially remade in Tamil by Nalan Kumarasamy titled Kadhalum Kadandhu Pogum for which ₹40 lakh (US$56,000) or ₩71,587,640.57 was paid as copyrights.

Romantic Heaven is a 2011 South Korean melodrama about fate, love, loss, and redemption.

Broken is a 2014 South Korean action thriller film written and directed by Lee Jeong-ho. The film stars Jung Jae-young and Lee Sung-min in the lead roles. The narrative revolves around a father who becomes a fugitive as he hunts down the two men responsible for his daughter's rape and murder.

Venus Talk is a 2014 South Korean film about the sex and love lives of three women in their forties, played by Uhm Jung-hwa, Moon So-ri and Jo Min-su. The romantic dramedy is directed by Kwon Chil-in. The screenplay by Lee Soo-ah won the Grand Prize at the 1st Lotte Entertainment Script Contest. It was released in theaters on February 13, 2014.

Pluto is a 2012 South Korean film written and directed by Shin Su-won about the severity of competition among students at an elite high school, and how far one will go to be at the top.