Uncharted Territory is a contemporary worship music album by Don Moen. [1] [2] [3] It was released on March 27, 2012 [4] [5] [6] by in:ciite Media [7] [8] and was funded successfully through Kickstarter on April 18, 2011. [9] For the first time, Uncharted Territory is not on the Integrity label, since Don Moen left his position as President of Integrity Music and it is his first album as an independent artist. 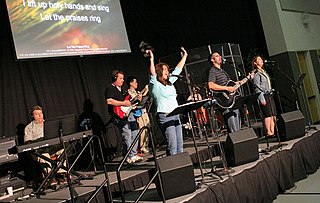 Contemporary worship music (CWM), also known as praise and worship music, is a defined genre of Christian music used in contemporary worship. It has developed over the past sixty years and is stylistically similar to pop music. The songs are frequently referred to as "praise songs" or "worship songs" and are typically led by a "worship band" or "praise team", with either a guitarist or pianist leading. It has become a common genre of music sung in many churches, particularly in charismatic or non-denominational Protestant churches with some Roman Catholic congregations incorporating it into their mass as well.

Kickstarter is an American public-benefit corporation based in Brooklyn, New York, that maintains a global crowdfunding platform focused on creativity and merchandising. The company's stated mission is to "help bring creative projects to life". Kickstarter has reportedly received more than $4 billion in pledges from 15.5 million backers to fund 257,000 creative projects, such as films, music, stage shows, comics, journalism, video games, technology and food-related projects.