Underberg is a German bitters drink.

Underberg may also refer to:

Underberg is an administrative town in a dairy and cattle farming community in the Mzimkulu River valley of KwaZulu-Natal, South Africa. It is situated at the foot of the 1,904 m Hlogoma Peak (place of echoes) in the foothills of the southern Drakensberg, KwaZulu-Natal. Underberg was established in 1917 when the railway from Pietermaritzburg reached the area. It is an important commercial centre for the region's farming industry providing many of the support services. It is also a trading center for people who come down the nearby Sani Pass from Lesotho.

Kira-Theresa Underberg is a German actress and radio play talker.

The "Colonel Bogey March" is a British march that was composed in 1914 by Lieutenant F. J. Ricketts (1881–1945), a British Army bandmaster who later became the director of music for the Royal Marines at Plymouth. 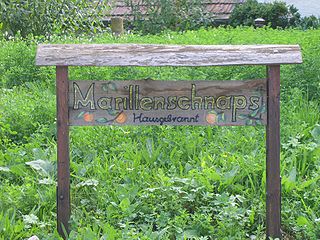 Schnapps or schnaps is a type of alcoholic beverage that may take several forms, including distilled fruit brandies, herbal liqueurs, infusions, and "flavored liqueurs" made by adding fruit syrups, spices, or artificial flavorings to neutral grain spirits.

Heiligensee is a locality within Reinickendorf, a borough of the German capital, Berlin. It has 17,780 inhabitants and an area of 10.7 km2 (4.1 sq mi).

The following lists events that happened during 1916 in South Africa.

The Umzimkulu River is a river in South Africa. In the past, the Umzimkulu formed part of the border between Eastern Cape and Kwazulu-Natal provinces. Presently this river is part of the Mvoti to Umzimkulu Water Management Area. In late February of every year, the river is host to one of South Africa's most popular canoe races, the Drak Challenge. 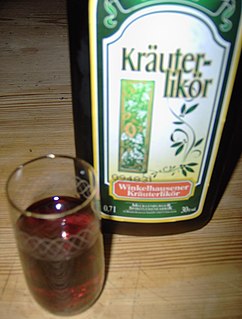 Kräuterlikör[ˈkʀɔɪtɐlikøːɐ] is a type of liqueur that is flavored with herbs or spices and traditionally drunk neat as a digestif. In contrast to bitters, they have a higher sugar content, expressed as invert sugar. Liqueurs of this kind normally contain 15% to 44% alcohol by volume.

Rheinberg is a town in the district of Wesel, in North Rhine-Westphalia, Germany. It is situated on the left bank of the Rhine, approx. 10 km north of Moers and 15 km south of Wesel.

Lydia Brandner is a fictional character from the German soap opera Verbotene Liebe. The role was originated by actress Theresa Underberg on 16 January 2008. Theresa announced on 21 December 2010 that she will leave the show in early 2011. She made her last appearance on 29 March 2011.

Jan Becher is a Czech liqueur company headquartered in Karlovy Vary. The most famous product of Becher is Becherovka.

The South African Railways Class NG3 4-6-2T of 1907 was a narrow-gauge steam locomotive from the pre-Union era in the Colony of Natal.

Impendle is a town in Umgungundlovu District Municipality in the KwaZulu-Natal province of South Africa.

Bhaca (Baca) is a Bantu language of South Africa. Traditionally considered a dialect of Swati, it is closer to Zulu, Phuthi and Xhosa. It is spoken southeast of Lesotho, where Sotho, Xhosa and Zulu meet, mainly around Mount Frere, Mzimkhulu, and to a lesser extent in Mount Ayliff, Matatiele, Harding, Bulwer, Underberg, Highflats, Umzinto, Umzumbe and Ixopo.

The R617 is a Regional Route in South Africa. Its north-eastern terminus is the N3 at Howick. It initially runs south-west, along the southern shore of Midmar Dam. It wends west-south-west passing through Bulwer. Just after Bulwer, it intersects with the northern terminus of the R612. After that intersection, it heads west to the town of Underberg. Passing through Underberg, it leaves to the west before wending first south-south-west then west to reach Franklin. South of Franklin, the route ends in Kokstad at an intersection with the R56

Bettys Diagnose is a German television series that premiered on January 9, 2015 at ZDF.