Undermind may refer to: 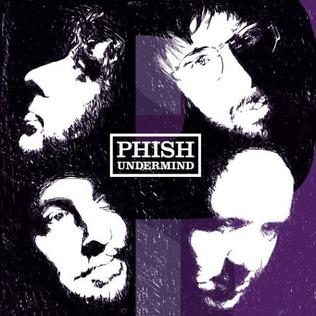 Undermind is the eleventh studio album by American rock band Phish, released on June 15, 2004 by Elektra Records. The album was the group's last release before they disbanded in August 2004. It is also their final studio release for Elektra Records; When the band reunited in 2009, their subsequent albums would be released through their own JEMP Records label.

Undermind is a 2003 psychological thriller written and directed by Nevil Dwek and starring Sam Trammell, Erik Jensen, and Susan May Pratt.

Undermind is a science fiction television drama produced by ABC Weekend Television in 1965. It ran for eleven episodes of sixty minutes each. It starred Rosemary Nicols, Jeremy Wilkin and Denis Quilley.

Primordial may refer to:

Nothing is the concept of the absence of anything.

The Connection may refer to:

Army of One may refer to:

Rosemary Nicols is a British actress. She comes from a theatrical family and was the author of the 1967 book The Loving Adventures of Jaby.

Specimens of Beauty is a documentary about the rock band Phish recording their 2004 album Undermind. Directed by famed photographer Danny Clinch, the film shows the techniques used by the band and album producer Tchad Blake, as Phish records what was to be their final album.

Jeremy Wilkin was an English-born Canadian actor, best known for his contributions to the television productions of Gerry Anderson.

Primordial Undermind is an experimental/psychedelic rock band, begun in 1988 when guitarist Eric Arn of Connecticut's Crystalized Movements moved to California, and continuing today in Austria. Arn initially went to London in 1989 to record demos with the Bevis Frond's Nick Saloman. These sessions produced "Swimming the Ultramoon" for the 1991 7" compilation "If I Could Hear You I Would Hit You" on Baby Huey.

Crystalized Movements were an American psychedelic rock/punk/folk band who recorded and performed sporadically from 1980-1993.

Amfibian Tales is an album by Phish lyricist Tom Marshall, who also handles lead vocals and keyboards on the album. Officially billed under "Tom Marshall and Co.," the disc includes a number of special guests, including Matt Kohut, Scott Metzger, old friend Pete Cottone, and New Jersey duo The Sarahs, who sing lead vocals on "Nothing," a track written by Marshall and Trey Anastasio that eventually found its way onto Phish's eleventh studio album, Undermind.

Paul Lewis is a British composer who was born in Brighton, England. Lewis began composing for television at age 20 and is best known today for his television music. It includes TV scores for dramatic series such as Arthur of the Britons, The Prisoner of Zenda and Undermind, children's series such as Brendon Chase, Seal Morning and Woof! and comedies such as the Monty Python's Flying Circus and The Benny Hill Show. Lewis has also written music for films and the concert hall.

Headphones Jam is an in-studio improvisational jam session by the American rock band Phish, recorded during sessions for the band's 2004 album Undermind.

Phish 3D is a 2010 concert film in 3D featuring the rock band Phish. It was filmed at Phish's Festival 8, a three-day, eight-set, 16-hour concert performed in October 2009 at the Empire Polo Field in Indio, California. The film opened with a sneak preview on April 20, 2010, followed by a limited one week engagement which began on April 30, 2010. The movie was produced by Action 3D Productions in association with Network Live and Cinedigm Digital Cinema Corp.

Andrew Weisblum is an American film and a visual effects editor. He has collaborated frequently with directors Darren Aronofsky and Wes Anderson. Weisblum was nominated for two American Cinema Editors's Eddie Award for Best Edited Animated Feature Film for his work on Fantastic Mr. Fox and Isle of Dogs and an Academy Award for Best Film Editing for his work on Black Swan. 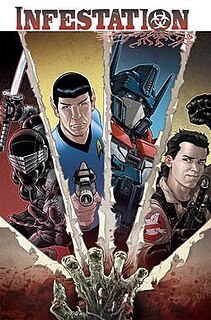 Infestation is a comic book crossover published by IDW Publishing, and connecting various of its licensed and original series together. It was published from January to April 2011. It consisted of two book-end one-shots, Infestation #1–2, set in the Zombies vs. Robots and CVO universes, and two-issue limited series from the G.I. Joe, Transformers, Ghostbusters, and Star Trek universes. Also, IDW published a digital-only Pocket God tie-in issue in May 2011 which was included in the hardcover book.

Phish in Hampton was a series of three consecutive Phish shows played in the Hampton Coliseum on March 6, 7, and 8th of 2009. These shows marked the first time the band had played together since their breakup in August 2004. It was estimated that just under 14,000 were in attendance at each of the three shows. Phish keyboardist, Page McConnell, commented on the excitement from the audience by saying, "The crowd was so loud I could not hear myself." Also, drummer, Jon Fishman, said, "Our band had driven itself into a ditch. We had to establish credibility with people again."