Undløse is the main village of Undløse Parish, located about 17 kilometres (11 mi) southwest of Holbæk in Holbæk municipality in northernwest Zealand, Denmark. As of 1 January 2020, it has a population of 1,133. [1] Undløse Church has Baroque woodcuts by Abel Schrøder and notable 15th-century frescoes. [2]

Undløse Church was built in the Romanesque style at the end of the 12th century. It was enlarged in the early 16th century with Gothic additions. [3]

The manor of Kongsdal with a history dating back to the 12th century lies in the northwestern part of Undløse and has had considerable influence on the development of the community. Today's manor house was built in 1598 by Peder Redtz. [4]

A sacred spring known as Hellig Kors Kilde (Spring of the Holy Cross) is located next to Kildegården. From the Middle Ages until well into the 19th century, it attracted pilgrims to the village especially in connection with the midsummer festival on 23 June known as Sankthansaften. A market was held each year the following day north of the church. [4]

While most of those living in the village commute to the Copenhagen area, Undløse still has a few small local businesses, mainly in the areas of agriculture, gardening, automobile repair and construction. There is a food store, a pizzeria and a kiosk. The village has a large day nursery and a primary school. There are also facilities for sports, meetings and community activities. [4]

Briarcliff Manor is a suburban village in Westchester County, New York, around 30 miles (50 km) north of New York City. It is on 5.9 square miles (15 km2) of land on the east bank of the Hudson River, geographically shared by the towns of Mount Pleasant and Ossining. Briarcliff Manor includes the communities of Scarborough and Chilmark, and is served by the Scarborough station of the Metro-North Railroad's Hudson Line. A section of the village, including buildings and homes covering 376 acres (152 ha), is part of the Scarborough Historic District and was listed on the National Register of Historic Places in 1984. The village motto is "A village between two rivers", reflecting Briarcliff Manor's location between the Hudson and Pocantico Rivers. Although the Pocantico is the primary boundary between Mount Pleasant and Ossining, since its incorporation the village has spread into Mount Pleasant. 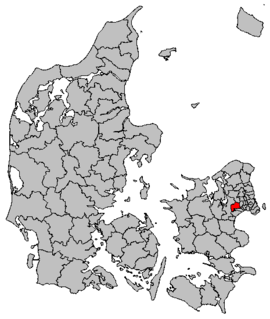 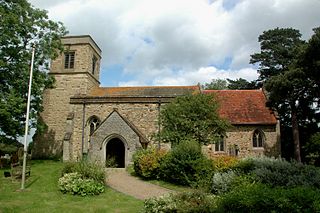 Drayton Parslow is a village and civil parish in the unitary authority area of Buckinghamshire, England, about 3.5 miles (5.6 km) south of Bletchley. The 2011 Census recorded the parish's population as 614.

Hedge End is a town and civil parish in Hampshire, England. Situated to the east of the City of Southampton, it adjoins the districts of West End and Botley. Hedge End lies within the Borough of Eastleigh and is part of the Southampton Urban Area. The original hamlet developed on Botley Common after 1250 when it was granted to the men of Botley as common pasture. In 1267, royal charters allowed Botley to hold an annual fair and a weekly market on the common which eventually became a market town.

Box is a large village and civil parish in Wiltshire, England, about 3 miles (5 km) west of Corsham and 5 miles (8 km) northeast of Bath. Besides the village of Box, the parish includes the villages of Ashley and Box Hill; Hazelbury manor; and the hamlets of Alcombe, Blue Vein, Chapel Plaister, Ditteridge, Henley, Kingsdown, Middlehill and Wadswick. To the east the parish includes much of Rudloe, formerly a hamlet but now a housing estate, and the defence establishments and related businesses on the site of RAF Rudloe Manor. 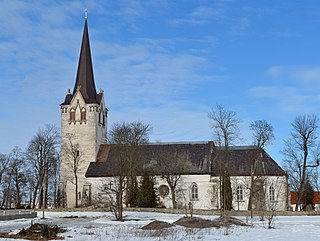 Keila is a town and an urban municipality in Harju County in north-western Estonia, 25 km southwest of Tallinn. Keila is also the location of administrative buildings of the surrounding Keila Parish, a rural municipality separate from the town itself.

Sand Hutton is a village and civil parish which forms the larger part of the Claxton and Sand Hutton grouped parish council, in the Ryedale district of North Yorkshire, England, about 6 miles (9.7 km) north-east of York.

Stillington is a village and civil parish in the Hambleton district of North Yorkshire, England. It lies on the York to Helmsley road about 10 miles (16 km) north of York. Stillington Mill was the endpoint of the Foss Navigation Act of 1793. 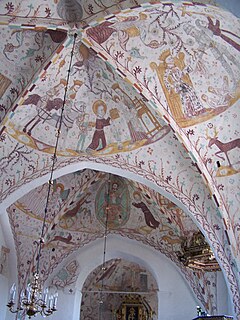 Church frescos or church wall paintings are to be found in some 600 churches across Denmark, no doubt representing the highest concentration of surviving church murals anywhere in the world. Most of them date back to the Middle Ages and were uncovered by Jacob Kornerup (1825–1913) who carried out restoration work in 80 churches across the country towards the end of the 19th century. They lay hidden for centuries as after the reformation, they were covered with limewash only to be revealed and restored during the course of the 19th and 20th centuries. In most of Europe medieval frescos, extremely common in the Middle Ages, were more likely to be removed completely during the Reformation or in subsequent rebuildings, or merely as they aged. The oldest frescos, dating back to the 12th century, were painted in the Romanesque style by artists from elsewhere in Europe but those from the 14th century and thereafter are in the Gothic style which was used by native Danish painters. It is these that are considered to be the most important for Danish art and culture. A distinction is to be made between these church wall paintings or kalkmalerier and the generic term "fresco" which refers to all types of painting on plastered walls or ceilings.

Orø is a small island in Denmark located in the Isefjord. 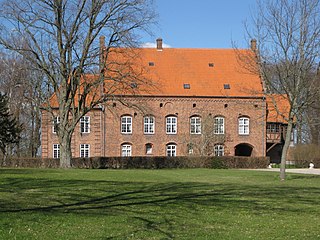 Vedbygård is a former manor houses located within the village of Ruds Vedby, 7 kilometres north-east of Høng, Sorø Municipality, Denmark. The oldest parts of the house date from the 15th century and are in the Late Gothic style.

Abel Schrøder, also Abel Schrøder the Younger, was a Danish woodcarver with a workshop in Næstved, then the centre for woodcarving in Southern Zealand. He is remembered for his many auricular altarpieces and pulpits depicting scenes from the life of Christ. Schrøder was also the organist for 42 years in St Martin's Church, Næstved.

Undløse Church is located in the village of Undløse some 17 km (11 mi) southwest of Holbæk in northern Zealand, Denmark. The original part of the Romanesque church derives from the late 12th century. The church is noted for its early 15th-century frescoes and for its elaborate Baroque altarpiece and pulpit, both woodcuts by Abel Schrøder.

The Union Master, also Master of Undløse, is the name given to an anonymous artist active in the first half of the 15th century in Denmark and possibly Sweden, which were both part of the Kalmar Union, hence the name. It has been suggested that the Union Master is identical with the Master of Fogdö. He and his workshop decorated churches with frescoes of unusually high artistic quality.

Toreby is a village in Guldborgsund Municipality on the Danish island of Lolland. It is located 6 km (3.7 mi) west of Nykøbing Falster and 11 km (6.8 mi) east of Sakskøbing. It had a population of 625 as of 1 January 2020. The main road through the town is known as Torebyvej.

Stokkemarke is a village on the Danish island of Lolland located midway between Nakskov and Maribo. In January 2020 it had a population of 405. Stokkemarke Church, first documented in 1396, originally built in the Romanesque style, has Gothic additions.

Hunseby is a village located some 3 km (1.9 mi) north of Maribo on the Danish island of Lolland. It belongs to Lolland Municipality in Region Sjælland. As of 2020, it has a population of 374.

Dannemare is a village on the Danish island of Lolland located 11 km south of Nakskov and 19 km west of Rødby. As of 2020, it has a population of 407.