Unfair (or disloyal) competition in commercial law is a deceptive business practice that causes economic harm to other businesses or to consumers. [1] [2] It includes a number of areas of law involving acts by one competitor or group of competitors which harm another in the field, and which may give rise to criminal offenses and civil causes of action.

The most common actions falling under the banner of unfair competition include:

Various unfair business practices such as fraud, misrepresentation, and unconscionable contracts may be considered unfair competition, if they give one competitor an advantage over others. In the European Union, each member state must regulate unfair business practices in accordance with the principles laid down in the Unfair Commercial Practices Directive, subject to transitional periods.

The Sherman Antitrust Act of 1890 is a United States antitrust law that regulates competition among enterprises, which was passed by Congress under the presidency of Benjamin Harrison. It is named for Sen. John Sherman, its principal author.

The Clayton Antitrust Act of 1914, was a part of United States antitrust law with the goal of adding further substance to the U.S. antitrust law regime; the Clayton Act sought to prevent anticompetitive practices in their incipiency. That regime started with the Sherman Antitrust Act of 1890, the first Federal law outlawing practices considered harmful to consumers. The Clayton Act specified particular prohibited conduct, the three-level enforcement scheme, the exemptions, and the remedial measures.

The Robinson–Patman Act of 1936 is a United States federal law that prohibits anticompetitive practices by producers, specifically price discrimination. It was designed to protect small retail shops against competition from chain stores by fixing a minimum price for retail products. 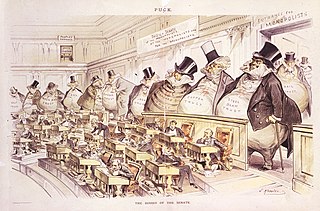 In the United States, antitrust law is a collection of federal and state government laws that regulates the conduct and organization of business corporations, generally to promote competition for the benefit of consumers. The main statutes are the Sherman Act of 1890, the Clayton Act of 1914 and the Federal Trade Commission Act of 1914. These Acts serve three major functions. First, Section 1 of the Sherman Act prohibits price-fixing and the operation of cartels, and prohibits other collusive practices that unreasonably restrain trade. Second, Section 7 of the Clayton Act restricts the mergers and acquisitions of organizations that would likely substantially lessen competition. Third, Section 2 of the Sherman Act prohibits the abuse of monopoly power. 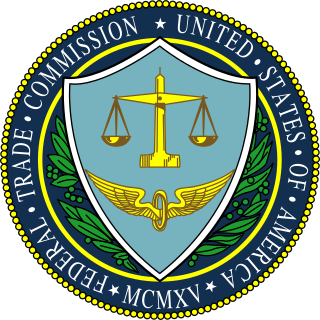 The Federal Trade Commission (FTC) is an independent agency of the United States government whose principal mission is the enforcement of civil (non-criminal) U.S. antitrust law and the promotion of consumer protection. The FTC shares jurisdiction over federal civil antitrust enforcement in the United States with the Antitrust Division of the U.S. Department of Justice. It is headquartered in the Federal Trade Commission Building in Washington, DC.

Predatory pricing, also known as undercutting, is a pricing strategy in which a company prices a product or service artificially low to gain new customers, drive competitors out of the market, or create barriers to entry for new potential competitors. 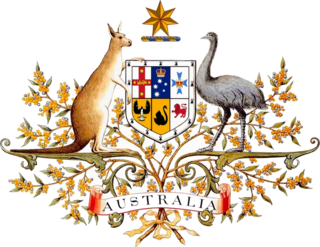 The Competition and Consumer Act 2010 (CCA) is an Act of the Parliament of Australia. Prior to 1 January 2011, it was known as the Trade Practices Act 1974 (TPA). The Act is the legislative vehicle for competition law in Australia, and seeks to promote competition, fair trading as well as providing protection for consumers. It is administered by the Australian Competition and Consumer Commission (ACCC) and also gives some rights for private action. Schedule 2 of the CCA sets out the Australian Consumer Law (ACL). The Federal Court of Australia has the jurisdiction to determine private and public complaints made in regard to contraventions of the Act.

Canadian trademark law provides protection to marks by statute under the Trade-marks Act and also at common law. Trademark law provides protection for distinctive marks, certification marks, distinguishing guises, and proposed marks against those who appropriate the goodwill of the mark or create confusion between different vendors' goods or services. A mark can be protected either as a registered trade-mark under the Act or can alternately be protected by a common law action in passing off.

Restraints of trade is a common law doctrine relating to the enforceability of contractual restrictions on freedom to conduct business. It is a precursor of modern competition law. In an old leading case of Mitchel v Reynolds (1711) Lord Smith LC said,

it is the privilege of a trader in a free country, in all matters not contrary to law, to regulate his own mode of carrying it on according to his own discretion and choice. If the law has regulated or restrained his mode of doing this, the law must be obeyed. But no power short of the general law ought to restrain his free discretion.

Microsoft Corp v Commission (2007) T-201/04 is a case brought by the European Commission of the European Union (EU) against Microsoft for abuse of its dominant position in the market. It started as a complaint from Sun Microsystems over Microsoft's licensing practices in 1993, and eventually resulted in the EU ordering Microsoft to divulge certain information about its server products and release a version of Microsoft Windows without Windows Media Player. The European Commission especially focused on the interoperability issue.

The Unfair Commercial Practices Directive 2005/29/EC regulates unfair business practices in EU law, as part of European consumer law. It requires corresponding laws to be passed that incorporate it into each member state's legal system.

The Antitrust Paradox is a 1978 book by Robert Bork that criticized the state of United States antitrust law in the 1970s. A second edition, updated to reflect substantial changes in the law, was published in 1993. It is claimed that the work is the most cited book on antitrust. Bork has credited Aaron Director as well as other economists from the University of Chicago as influences. 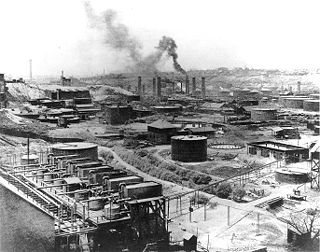 The history of United States antitrust law is generally taken to begin with the Sherman Antitrust Act 1890, although some form of policy to regulate competition in the market economy has existed throughout the common law's history. Although "trust" had a technical legal meaning, the word was commonly used to denote big business, especially a large, growing manufacturing conglomerate of the sort that suddenly emerged in great numbers in the 1880s and 1890s. The Interstate Commerce Act of 1887 began a shift towards federal rather than state regulation of big business. It was followed by the Sherman Antitrust Act of 1890, the Clayton Antitrust Act and the Federal Trade Commission Act of 1914, the Robinson-Patman Act of 1936, and the Celler-Kefauver Act of 1950.

In addition to federal laws, each state has its own unfair competition law to prohibit false and misleading advertising. In California, one such statute is the Unfair Competition Law [hereinafter “UCL”], Business and Professions Code §§ 17200 et seq. The UCL “borrows heavily from section 5 of the Federal Trade Commission Act” but has developed its own body of case law.

FTC v. Motion Picture Advertising Service Co., 344 U.S. 392 (1953), was a 1953 decision of the United States Supreme Court in which the Court held that, where exclusive output contracts used by one company "and the three other major companies have foreclosed to competitors 75 percent of all available outlets for this business throughout the United States" the practice is "a device which has sewed up a market so tightly for the benefit of a few [that it] falls within the prohibitions of the Sherman Act, and is therefore an 'unfair method of competition' " under § 5 of the FTC Act. In so ruling, the Court extended the analysis under § 3 of the Clayton Act of requirements contracts that it made in the Standard Stations case to output contracts brought under the Sherman or FTC Acts.