In mathematics, an unfolding of a smooth real-valued function ƒ on a smooth manifold, is a certain family of functions that includes ƒ.

Let us assume that for given

-dimensional manifold, and consider the family of mappings (parameterised by

In other words the functions

are the same: the function

is contained in, or is unfolded by, the family

An example of an unfolding of

As is the case with unfoldings,

are called variables, and

are called parameters, since they parameterise the unfolding.

In practice we require that the unfoldings have certain properties. In

is a smooth mapping from

and so belongs to the function space

As we vary the parameters of the unfolding, we get different elements of the function space. Thus, the unfolding induces a function

denotes the group of diffeomorphisms of

The action is given by

lies in the orbit of

(and vice versa). One property that we can impose is that

" denotes "transverse to". This property ensures that as we vary the unfolding parameters we can predict – by knowing how the orbit foliates

– how the resulting functions will vary.

, but the converse is false. Let

be local coordinates on

denote the ring of smooth functions. We define the Jacobian ideal of

Then a basis for a versal unfolding of

is given by the quotient

This quotient is known as the local algebra of

. The dimension of the local algebra is called the Milnor number of

. The minimum number of unfolding parameters for a versal unfolding is equal to the Milnor number; that is not to say that every unfolding with that many parameters will be versal. Consider the function

. A calculation shows that

give a basis for a versal unfolding, and that

An important object associated to an unfolding is its bifurcation set. This set lives in the parameter space of the unfolding, and gives all parameter values for which the resulting function has degenerate singularities.

In probability theory, the central limit theorem (CLT) establishes that, in some situations, when independent random variables are added, their properly normalized sum tends toward a normal distribution even if the original variables themselves are not normally distributed. The theorem is a key concept in probability theory because it implies that probabilistic and statistical methods that work for normal distributions can be applicable to many problems involving other types of distributions.

Vapnik–Chervonenkis theory was developed during 1960–1990 by Vladimir Vapnik and Alexey Chervonenkis. The theory is a form of computational learning theory, which attempts to explain the learning process from a statistical point of view.

In mathematics, the Fourier inversion theorem says that for many types of functions it is possible to recover a function from its Fourier transform. Intuitively it may be viewed as the statement that if we know all frequency and phase information about a wave then we may reconstruct the original wave precisely.

In mathematics, deformation theory is the study of infinitesimal conditions associated with varying a solution P of a problem to slightly different solutions Pε, where ε is a small number, or vector of small quantities. The infinitesimal conditions are therefore the result of applying the approach of differential calculus to solving a problem with constraints. One might think, in analogy, of a structure that is not completely rigid, and that deforms slightly to accommodate forces applied from the outside; this explains the name. 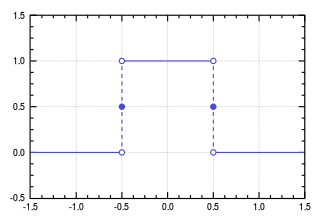 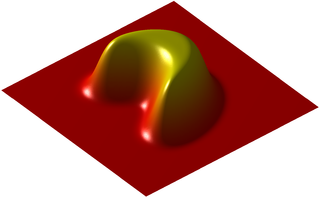 In mathematical analysis, the smoothness of a function is a property measured by the number of continuous derivatives it has over some domain. At the very minimum, a function could be considered "smooth" if it is differentiable everywhere. At the other end, it might also possess derivatives of all orders in its domain, in which case it is referred to as a C-infinity function.

A locally compact quantum group is a relatively new C*-algebraic approach toward quantum groups that generalizes the Kac algebra, compact-quantum-group and Hopf-algebra approaches. Earlier attempts at a unifying definition of quantum groups using, for example, multiplicative unitaries have enjoyed some success but have also encountered several technical problems.

In mathematics, an Igusa zeta function is a type of generating function, counting the number of solutions of an equation, modulop, p2, p3, and so on.

Uncertainty theory is a branch of mathematics based on normality, monotonicity, self-duality, countable subadditivity, and product measure axioms.

In geometry, a valuation is a finitely additive function on a collection of admissible subsets of a fixed set with values in an abelian semigroup. For example, the Lebesgue measure is a valuation on finite unions of convex bodies of Euclidean space . Other examples of valuations on finite unions of convex bodies are the surface area, the mean width, and the Euler characteristic.

In functional analysis, every C*-algebra is isomorphic to a subalgebra of the C*-algebra of bounded linear operators on some Hilbert space H. This article describes the spectral theory of closed normal subalgebras of .

In the field of Functional Analysis, it is possible to generalize the notion of derivative to infinite dimensional topological vector spaces (TVSs) in multiple ways. But when the domain of TVS-value functions is a subset of finite-dimensional Euclidean space then the number of generalizations of the derivative is much more limited and derivatives are more well behaved. This article presents the theory of k-times continuously differentiable functions on an open subset of Euclidean space , which is an important special case of differentiation between arbitrary TVSs. All vector spaces will be assumed to be over the field , where is either the real numbers or the complex numbers .