The Nigerian Premier Basketball League, often abbreviated to the NPL, is the pre-eminent men's professional basketball league in Nigeria. The league consists of sixteen teams who are categorized into two conferences based on the geographical location. These conferences are Savannah and the Atlantic. The league was sponsored by the DSTV until 2017, who had both title and TV rights through the contract agreement. The league was then referred to as the DSTV Premier Basketball League.

Ndudi Hamani Ebi is a Nigerian professional basketball player for Boulazac Basket Dordogne of the LNB Pro A.

Kwara is a state in Western Nigeria. Its capital is Ilorin. Kwara is located within the North Central geopolitical zone, commonly referred to as the Middle Belt. The primary ethnic group is Yoruba, with significant Nupe, Bariba, and Fulani minorities.

Clube Desportivo 1º de Agosto is a multisports club from Luanda, Angola. The club, founded August 1, 1977, is attached to the Angolan armed forces, which is its main sponsor. Its main team competes in men's football, and its professional basketball team is also noteworthy within the club. The club's colors are red and black. The club won its first title in football, the Angolan League, in 1979. and in basketball in 1980. Handball and Volleyball have also won many titles to the club.

Chamberlain "Champ" Emeka Oguchi is a Nigerian American professional basketball player who last played for Boulazac Basket Dordogne of the LNB Pro B. His name "Emeka" is an abbreviation of the Igbo name "Chukwuemeka".

The FIBA Africa Women's Championship is the women's basketball continental championship of Africa, played biennially under the auspices of the Fédération Internationale de Basketball, the basketball sport governing body, and the African zone thereof. The tournament also serves to qualify teams for participation in the quadrennial FIBA World Championship for Women and the Olympic basketball tournament. 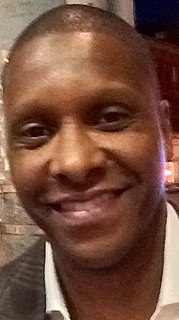 Masai Ujiri is a Nigerian professional basketball executive, former scout and former player, currently serving as the president of the Toronto Raptors in the National Basketball Association (NBA).

The 2011 FIBA Africa Championship for Women was the 20th FIBA Africa Championship for Women, played under the auspices of the Fédération Internationale de Basketball, the basketball sport governing body, and the African zone thereof. At stake was the berth allocated to Africa in the 2012 Summer Olympics basketball tournament. The tournament was held from September 23–October 2 in Mali.

The 2011 FIBA Africa Women's Clubs Champions Cup was an international basketball tournament that took place at the Indoor Sports Hall of the National Stadium in Surulele, Lagos, Nigeria, from December 5 to 11, 2011. The tournament, organized by FIBA Africa, and hosted by First Deepwater, was contested by 5 clubs in a round robin system followed by a third-place match played by the 3rd and 4th placed teams from the preliminary round and a final played by the two top teams from the same round.

Adaora Nnenna Elonu,, is a Nigerian-American basketball forward, who currently plays for the Nigerian's national team and the Atlanta Dream. Elonu played college basketball for Texas A&M, with whom she won the 2011 NCAA Championship.

The African Basketball League is a men's professional basketball league in Africa established with the vision of creating opportunities in the sports industry by capturing the rich entertainment culture of Africans to promote sports tourism.

Kostas Antetokounmpo is a Greek-Nigerian professional basketball player for the Dallas Mavericks of the National Basketball Association (NBA), on a two-way contract with the Texas Legends of the NBA G League. He was drafted 60th overall by the Philadelphia 76ers in the 2018 NBA draft, and his draft rights were then traded to the Dallas Mavericks. He attended and played collegiate level basketball in the United States for the Dayton Flyers. He is listed as a 6 ft 10 in (2.08 m) power forward. Two of his older brothers, Giannis and Thanasis, have both played in the NBA.