Union of Democrats and Independents

The Union of Democrats and Independents (French : Union des démocrates et indépendants, UDI) is a centre to centre-right political party in France and former electoral alliance founded on 18 September 2012 on the basis of the parliamentary group of the same name in the National Assembly. The party was composed of separate political parties who retained their independence, but always in coalition with the biggest right wing party The Republicans. As most of them have been expelled or have left, the Democratic European Force is the last founding party to participate in the UDI.

The party's current president is Jean-Christophe Lagarde, who was elected at the congress of the party on 15 November 2014, after the resignation of Jean-Louis Borloo on 6 April 2014 for health reasons. [5]

On 9 October 2012, the leaderships of the parties making up the UDI parliamentary group announced the creation of a new political party and set up a temporary office in Paris. On 21 October, a founding assembly was convened at the Maison de la Mutualité in Paris, which marked the official foundation of the movement. [6]

Following the congress of the Union for a Popular Movement (UMP) on 18 November 2012 and the ensuing tensions between the two rival candidates for the party's presidency, a number of leading figures of the UMP announced that they were joining the UDI, including former cabinet minister and deputy Pierre Méhaignerie and Mayenne deputy Yannick Favennec. However, during a legislative by-election on 9 and 16 December 2012 in the Val-de-Marne's 1st constituency, UDI incumbent Henri Plagnol - a former member of the UMP who had joined the UDI in June - was defeated by a right-wing dissident, Sylvain Berrios. [7]

On 9 June 2013, the UDI gained a deputy (Meyer Habib) at the by-election in the Eighth constituency for French residents overseas, [8] but this contribution was cancelled out by Gilles Bourdouleix's resignation from UDI after the controversy for saying Adolf Hitler had not killed enough Romani people. [9]

The UDI became a member of the Alliance of Liberals and Democrats for Europe Party on 2 December 2016. [10]

The National Centre of Independents and Peasants was expelled after its leader and only deputy Gilles Bourdouleix's resigned for saying Adolf Hitler had not killed enough Romani people. [12] The Centrist Alliance was excluded on 25 March 2017 as a result of its support for Emmanuel Macron; Territories in Movement left after the results of the 2015 regional elections; and the Liberal Democratic Party (PLD) was excluded from the UDI in December 2013. The Radical Party left after its reunification with the Radical Party of the Left to form the Radical Movement on 10 December 2017 (and therefore the Modern Left as well); on 16 December, The Centrists followed suit in announcing its intention to quit the UDI. The Democratic European Force is the last founding party to remain a component of the UDI. [13]

The 2014 elections involved an alliance with the forces of the Democratic Movement (MoDem); this joint list, The Alternative (L'Alternative), saw 3 UDI MEPs out of 7 elected from the list. The change in seats shown is since the 2009 election for the MoDem list. 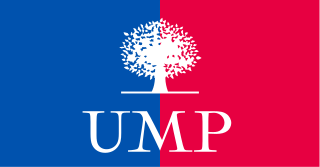 The Union for French Democracy was a centre to centre-right political party in France. It was founded in 1978 as an electoral alliance to support President Valéry Giscard d'Estaing in order to counterbalance the Gaullist preponderance over the political right in France. This name was chosen due to the title of Giscard d'Estaing's 1976 book, Démocratie française. The party brought together Christian democrats, liberal-radicals, and non-Gaullist conservatives, and described itself as centrist.

The Republican, Radical and Radical-Socialist Party is a liberal and formerly social-liberal political party in France. It is also often referred to simply as the Radical Party, or to prevent confusion with other French Radical parties as the Parti radical valoisien, abbreviated to Rad, PR, PRV, or historically PRRRS.

Liberalism and radicalism in France refer to different movements and ideologies. The main line of conflict in France during the 19th century was between monarchists and republicans. The Orléanists, who favoured constitutional monarchy and economic liberalism, were opposed to the Republican Radicals.

Jean Arthuis is a French politician. Over the course of career, he has held various ministerial positions and served as Member of the European Parliament from France, where he chaired the Committee on Budgets. He also serves as Senator representing Mayenne in the French Parliament. 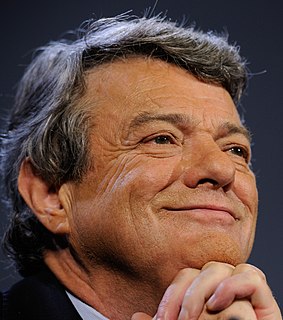 Jean-Louis Marie Borloo is a French politician who served as president of the Union of Democrats and Independents (UDI) from 2012 to 2014. He also was Minister of the Economy, Finance and Employment in 2007 and Minister of Ecology, Energy, Sustainable Development and the Sea from 2007 until 2010 under President Nicolas Sarkozy.

The Democratic Movement is a centre to centre-right political party in France that is characterised by a strong pro-European stance. MoDem was founded by François Bayrou to succeed the Union for French Democracy (UDF) and contest the 2007 legislative election, after his strong showing in the 2007 presidential election. Initially named the Democratic Party, the party was renamed "Democratic Movement", because there was already a small Democratic Party in France. 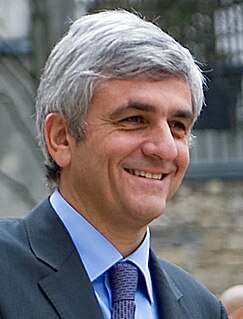 Hervé Morin is a French politician of the Centrists who has been serving as the first President of the Regional Council of Normandy since January 2016. Under President Nicolas Sarkozy, he was the Minister of Defence.

The Centrists, formerly known as New Centre and European Social Liberal Party, is a centre-right political party in France formed by the members of the Union for French Democracy (UDF) – including 18 of the 29 members of the UDF in the National Assembly) – who did not agree with François Bayrou's decision to found the Democratic Movement (MoDem) and wanted to support the newly elected president Nicolas Sarkozy, continuing the UDF-Union for a Popular Movement (UMP) alliance.

Jean-Christophe Lagarde is a French politician serving as president of the Union of Democrats and Independents (UDI) since 2014. He succeeded Jean-Louis Borloo after a short interim by Yves Jégo. Lagarde has been the member of the National Assembly for the fifth constituency of Seine-Saint-Denis since 2002.

The Centrist Union group is a centrist parliamentary group in the Senate uniting members of the Union of Democrats and Independents (UDI) and Democratic Movement (MoDem), as well as the Centrist Alliance (AC), a former component of the UDI. The group was historically associated with the Popular Republican Movement (MRP) and later the Democratic Centre (CD), Centre of Social Democrats (CDS), and Union for French Democracy (UDF). Most recently, from 2012 to 2017, it was known as the Union of Democrats and Independents – UC group.

The Liaison Committee for the Presidential Majority was a structure initiated by Nicolas Sarkozy to coordinate the political parties that support his action.

The Alliance (L'Alliance) or Republican, Ecologist and Social Alliance, often referred as "Confederation of the Centres", was a centrist, liberal, ecologist, and social-liberal coalition of political parties in France.

The Republicans is a liberal-conservative political party in France, largely inspired by the Gaullist tradition. It holds pro-European views. 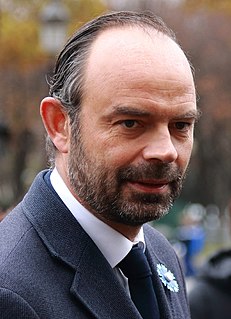 Legislative elections in France were held on 11 and 18 June 2017 to elect the 577 members of the 15th National Assembly of the Fifth Republic. They followed the two-round presidential election won by Emmanuel Macron. The centrist party he founded in 2016, La République En Marche! (LREM), led an alliance with the centrist Democratic Movement (MoDem); together, the two parties won 350 of the 577 seats—a substantial majority—in the National Assembly, including an outright majority of 308 seats for LREM. The Socialist Party (PS) was reduced to 30 seats and the Republicans (LR) reduced to 112 seats, and both parties' allies also suffered from a marked drop in support; these were the lowest-ever scores for the centre-left and centre-right in the legislative elections. The movement founded by Jean-Luc Mélenchon, la France Insoumise (FI), secured 17 seats, enough for a group in the National Assembly. Among other major parties, the French Communist Party (PCF) secured ten and the National Front (FN) obtained eight seats. Both rounds of the legislative election were marked by record low turnout.

The Radical Movement, officially the Radical, Social and Liberal Movement, was a social-liberal political party in France.