Union of Nigerien Independents and Sympathisers

UNIS was established in May 1948 by a mix of former members of the Nigerien Progressive Party (PPN) and independents. [1] [2] In a French National Assembly by-election in June that year, its candidate Georges Condat was elected with 72% of the vote. [3] In the full elections in 1951, UNIS won both of the Nigerien seats in the National Assembly. [3]

The 1952 Territorial Assembly elections saw the party win all 35 second college seats. [4] However, it suffered two major splits in the mid-1950s; [2] the first in 1953 followed disagreements about linking with the PPN in order to present a united front, and saw Condat leave to form the Nigerien Progressive Union (UPN). After unsuccessful efforts at uniting the new party with the PPN, Condat rejoined UNIS. The second split in 1955 was caused an attempt by some of its leadership to affiliate UNIS with the Indépendants d'Outre Mer group in the French parliament, [5] [6] with the majority of the party leaving to form the Nigerien Action Bloc (BNA). [7] [8]

The 1956 French elections saw UNIS receive only 8% of the vote and lose both seats, with a BNA–UPN alliance and PPN winning one each. UNIS was subsequently dissolved when Zodi Ikhia established the Nigerien Democratic Front in 1957. [1] 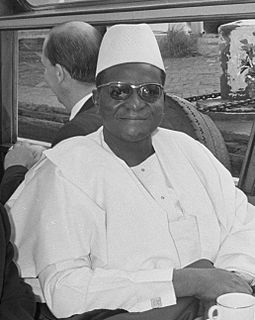 Hamani Diori was the first President of the Republic of Niger. He was appointed to that office in 1960, when Niger gained independence. Although corruption was a common feature of his administration, he gained international respect for his role as a spokesman for African affairs and as a popular arbitrator in conflicts. His rule ended with a coup in 1974.

The Union of Independent Nigeriens is a political party in Niger.

Adamou Assane Mayaki was a Nigerien politician and diplomat. Mayaki was the Foreign Minister of Niger from 1963–1965, and a leading member of the ruling PPN-RDA party.

The Union of Popular Forces for Democracy and Progress–Sawaba is a political party in Niger, founded as the Nigerien Democratic Union in 1954. The original party, founded by Nigerien Progressive Party (PPN) co-leader Djibo Bakary when he was expelled from the PPN. In the mid-1950s it created a broad coalition led by urban leftists but forged of conservative rural notables, especially from Hausa areas, which dominated the nascent Nigerien independence movement. In this period it was renamed Mouvement Socialiste Africain–Sawaba, and then simply Sawaba. In pushing for complete independence from France in a 1958 referendum, the party fractured. At independence in 1960 it found itself in opposition and outlawed by Niger's first president, Hamani Diori. From exile, the party attempted an abortive guerrilla campaign in the mid-1960s, and then largely disappeared. Its leadership returned to Niger following the 1974 military coup, but soon found themselves arrested, in exile, or marginalised. Following the return of democracy in 1991, the now elderly Bakary re-founded the party as UDFP–Sawaba. In the 1993 elections it took only a small numbers of votes. Within the year the party had split, with a new faction (UDFR–Sawaba) joining the government coalition. Despite Bakary's death in 1998 and their continued electoral underachievement, both parties holding the Sawaba name continue.

Boubou Hama was a Nigerien author, historian, and politician. He was President of the National Assembly of Niger under President of Niger, Hamani Diori.

The 1974 Nigerien coup d'état was a largely bloodless military insurrection which overthrew the first postcolonial government of Niger. The government that followed, while plagued by coup attempts of its own, survived until 1991.

Zodi Ikhia was a Nigerian politician.

The Nigerien Democratic Front was a political party in Niger. It published the party journal L'Unité ('Unity').

Territorial Assembly elections were held in Niger on 14 December 1958. The result was a victory for the Union for the Franco-African Community, which won 49 of the 60 seats.

The Nigerien Action Bloc was a political party in Niger in 1955 and 1956 led by Issoufou Saidou Djermakoye, a traditional chief and former chairman of the Nigerien Progressive Party (PPN).

The Nigerien Progressive Union was a political party in Niger led by Georges Condat.

The Union for the Franco-African Community was a political alliance in Niger.