Union syndicale des travailleurs de Tunisie (abbreviated USTT) was a central trade union organisation in Tunisia. Founded in 1946, as the Tunisian branch of the French trade union confederation CGT separated itself from the mother organization. [1] [2] Hassen Saadaoui was the chairman of USTT. [2]

In September 1956 USTT dissolved itself, and called upon its members to join the UGTT. [2]

The Tunisian General Labour Union is a national trade union center in Tunisia. It has a membership of 517,000 and was founded January 20, 1946.

The Constitutional Liberal Party, most commonly known as Destour, was a Tunisian political party, founded in 1920, which had as its goal to liberate Tunisia from French colonial control.

Beni Hassen is a town and commune in the Monastir Governorate, Tunisia.

Hassen Belkhodja, also known as Hassan Belkhodja, was a Tunisian politician and businessman. 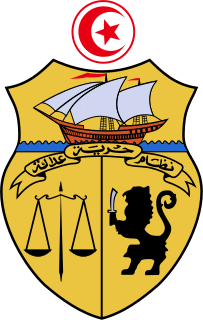 The Ministry of Foreign Affairs of Tunisia is a cabinet-level governmental agency in Tunisia in charge of conducting and designing the foreign policy of the country.

The African Race Walking Championships is a quadrennial race walking competition for athletes representing countries from Africa, organized by the Confederation of African Athletics (CAA). It was established in 1999 and has featured races for senior men and women. The 2005 edition was held jointly with the African Combined Events Championships. The 2009 edition also featured junior events. The 2013 men's event was part of the IAAF World Race Walking Challenge. Nothing is known on a 2013 women's race.

Mouez Hassen is a Tunisian professional footballer who plays as a goalkeeper for the Tunisia national team.

The 2014 Tunis Open was a professional tennis tournament played on clay courts. It was the ninth edition of the tournament which was part of the 2014 ATP Challenger Tour. It took place in Tunis, Tunisia between 28 April and 4 May 2014.

Tunisian Union of Industry, Trade and Handicrafts or UTICA is an employers' organization in Tunisia representing industrial, trade and craft sectors. On October 9, 2015, the National Dialogue Quartet, comprising UTICA, the Tunisian General Labour Union, the Tunisian Human Rights League and the Tunisian Order of Lawyers, was announced as the laureate of the 2015 Nobel Peace Prize "for its decisive contribution to the building of a pluralistic democracy in Tunisia in the wake of the Jasmine Revolution of 2011". 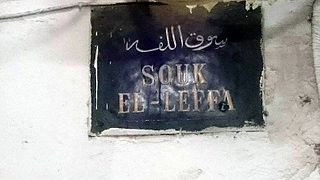 Souk El Leffa, also called Souk of Djerbians, is one of the souks of the medina of Tunis. It is called as such because it was mainly occupied by merchants from the Tunisian island of Djerba.

Souk El Bechmak or souk El Bshamkiyya is a former souk of the medina of Tunis, specialized in bechmak trading.

Mohamed Saadaoui is a Tunisian freestyle wrestler. He competed in the 86 kg division at the 2016 Summer Olympics, but was eliminated in the first bout. He took up wrestling in 2005. 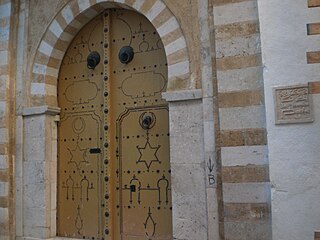 Dar Hammuda Pasha is an old palace in the medina of Tunis. It is considered as one of the oldest and biggest palaces of the medina that kept their original architecture.

Harmel Mosque, also known as the Kenitra Mosque, is a Tunisian mosque located at Sabaghine Street in the medina of Tunis.

Hazem Haj Hassen is a Tunisian professional footballer who plays as a forward for Étoile du Sahel. 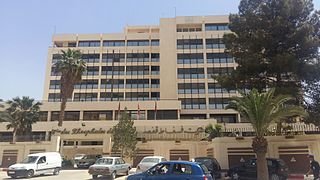 The Compagnie des phosphates de Gafsa or CPG is a Tunisian phosphate mining company based in Gafsa, formed in the late 19th century during the French colonial era, and once the largest employer in the country. It was merged in 1994 with the Groupe chimique tunisien (CGT) to form the CPG-CGT group. Before the revolution of 2011 the company was the fifth largest phosphate producer in the world, but since then strikes and social unrest have caused production to drop by half.

Spain–Tunisia relations are the bilateral and diplomatic relations between these two countries. Tunisia has a embassy in Madrid and two consulate s fees in Barcelona and Palma de Mallorca. Spain has an embassy in Tunisia.