United Nations Good Offices Mission in Afghanistan and Pakistan (UNGOMAP) was established in May 1988, during the Soviet–Afghan War, to assist in ensuring the implementation of the agreements on the settlement of the situation relating to Afghanistan and investigate and report possible violations of any of the provisions of the agreements. The United Nations Security Council confirmed its establishment in Resolution 622 (1988).

By 15 August 1988, the Soviet military withdrew nearly 50 percent of its troops (some 50,000 men) from Afghanistan, evacuating 10 main garrisons and handing them over to the Afghan armed forces. Another 8 garrisons remained under Soviet control until the end of the pullout on 15 February 1989.

UNGOMAP received numerous complaints from both Afghanistan and Pakistan of alleged violations of the Geneva accords. Afghanistan alleged political activities and propaganda hostile to the Government of Afghanistan taking place in Pakistan, border crossings of men and materiel from Pakistan to Afghanistan, cross-border firings, acts of sabotage, rocket attacks on major urban centres, violations of Afghan airspace by Pakistan aircraft, the continued presence in Pakistan of training camps and arms depots for Afghan opposition groups, and direct involvement by Pakistan military personnel inside Afghanistan, as well as restrictions placed on refugees who wished to return to Afghanistan. Pakistan's complaints included allegations of political activities and propaganda hostile to the Government of Pakistan, bombings and violations of its airspace by Afghan aircraft, acts of sabotage and cross-border firings, including the use of SCUD missiles against Pakistan territory.

UNGOMAP made every effort to investigate complaints lodged by the two parties. However, a number of difficulties hampered the effectiveness of the work of the Mission's inspection teams. These included the rough nature of the terrain, the time which lapsed before many of the alleged incidents were reported, and the security conditions prevailing in the area of operation.

UNGOMAP also maintained close cooperation with the United Nations High Commissioner for Refugees (UNHCR). In particular, it was ready to monitor the situation inside Afghanistan and inform UNHCR of the safety conditions necessary for the return and resettlement of refugees. Up to 5 million refugees were estimated to be living in Pakistan and Iran. However, because the fighting in Afghanistan continued, conditions remained unstable and only a limited number of refugees returned to Afghanistan.

Foreign relations of Afghanistan are handled by the nation's Ministry of Foreign Affairs, which is headed by Mohammad Hanif Atmar. He answers to, and receives guidance from, the President of Afghanistan, Ashraf Ghani.

The United Nations High Commissioner for Refugees (UNHCR) is a UN agency mandated to aid and protect refugees, forcibly displaced communities, and stateless people, and to assist in their voluntary repatriation, local integration or resettlement to a third country. It is headquartered in Geneva, Switzerland, with over 17,300 staff working in 135 countries.

A refugee, generally speaking, is a displaced person who has been forced to cross national boundaries and who cannot return home safely. Such a person may be called an asylum seeker until granted refugee status by the contracting state or the United Nations High Commissioner for Refugees (UNHCR) if they formally make a claim for asylum. The lead international agency coordinating refugee protection is the United Nations Office of the UNHCR. The United Nations has a second Office for refugees, the United Nations Relief and Works Agency or UNRWA, which is solely responsible for supporting the large majority of Palestinian refugees. 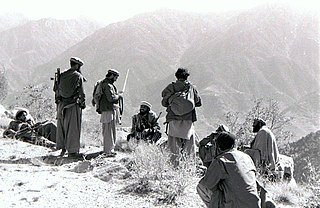 The Soviet–Afghan War was a conflict wherein insurgent groups as well as smaller Maoist groups, fought a nine-year guerrilla war against the Soviet Army and the Democratic Republic of Afghanistan government throughout the 1980s, mostly in the Afghan countryside. The mujahideen were variously backed primarily by the United States, Pakistan, Iran, Saudi Arabia, China, and the United Kingdom; the conflict was a Cold War-era proxy war. Between 562,000 and 2,000,000 civilians were killed and millions of Afghans fled the country as refugees, mostly to Pakistan and Iran.

The following lists events that happened during 2001 in Afghanistan.

The following lists events that happened during 1961 in Afghanistan.

On 10 August 1999, a Breguet Atlantic maritime patrol aircraft of the Pakistan Naval Air Arm was shot down by a MiG 21 fighter of the Indian Air Force over the Rann of Kutch, on the border between India and Pakistan. The episode took place just a month after the Kargil War, aggravating already tense relations between the two countries.

The Geneva Accords, known formally as the agreements on the settlement of the situation relating to Afghanistan, were signed on 14 April 1988 at the Geneva headquarters of the United Nations, between Afghanistan and Pakistan, with the United States and the Soviet Union serving as guarantors.

Afghanistan refugees are nationals of Afghanistan who left their country as a result of major wars or persecution. The 1979 Soviet invasion of Afghanistan marks the first wave of internal displacement and refugee flow from Afghanistan to neighboring Pakistan and Iran that began providing shelter to Afghan refugees. When the Soviet war ended in 1989, these refugees started to return to their homeland. In April 1992, a major civil war began after the mujahideen took over control of Kabul and the other major cities. Afghans again fled to neighboring countries, including Tajikistan and India, and to regions such as Europe.

Jalozai is a village located in Nowshera District of Khyber Pakhtunkhwa Pakistan. Jalozai is famous for an Afghan refugee camp which is located about 35 kilometres southeast of Peshawar, Pakistan.

Wendy Jean Chamberlin is a veteran diplomat who has served in the United States Department of State and USAID, worked for the UN High Commissioner on Refugees (UNHCR), and now serves as President of the Middle East Institute. 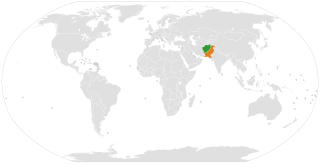 Afghanistan–Pakistan relations involve bilateral relations between Afghanistan and Pakistan. The two neighbouring countries share deep historical and cultural links; each has declared itself an Islamic republic and both have become members of the South Asian Association for Regional Cooperation. Relations between the two countries have been strained since 1947, when Pakistan gained independence and Afghanistan was the sole country to vote against Pakistan's admission into the UN. Afghanistan immediately armed separatist movements in the nascent Pakistan and made irredentist claims to large swathes of Pakistani territory—which prevented the emergence of normalised ties between the two countries. Further tensions have arisen with various issues related to the War in Afghanistan (1978–present), and with the millions of Afghan refugees who have sought shelter in Pakistan since the start of that war. Water rights, the growing relations of India and Afghanistan,

Pakistanis in Afghanistan are mostly refugees, but also include laborers, traders, businesspersons, and small number of diplomats. Those working in white-collar professions include doctors, engineers, teachers and journalists. Because Pakistan and Afghanistan are neighbouring states with a loosely controlled border, and a distributed population of ethnic Pashtuns and Baloch people, there is constant flow of population between the two countries.

Afghans in Pakistan primarily constitute refugees who have fled wars in Afghanistan, but there are small numbers of Afghan asylum seekers, migrant workers, merchants, businesspeople, exchange students and diplomats. Most were born and raised in Pakistan and are under age 30, but are still considered citizens of Afghanistan. They are under the protection of the United Nations High Commissioner for Refugees (UNHCR), and have been given legal status in Pakistan until the end of 2017.

The population of Afghans in Tajikistan consists largely of refugees from the various wars which have plagued Afghanistan. They form the vast majority of all refugees in Tajikistan; the other refugees in the country include a few Uyghurs and Iraqis.

United Nations Security Council resolution 622, adopted unanimously on 20 September 1988, after noting the Geneva Accords agreement signed on 14 April 1988, the Council confirmed the agreement to the measures in the letters of the Secretary-General concerning the settlement of the situation in Afghanistan.

United Nations Security Council resolution 1089, adopted unanimously on 13 December 1996, after recalling all resolutions on the situation in Tajikistan and the Tajik-Afghan border, the Council extended the mandate of the United Nations Mission of Observers in Tajikistan (UNMOT) until 15 March 1997 and addressed efforts to end the conflict in the country.

Refugee crisis can refer to difficulties and dangerous situations in the reception of large groups of forcibly displaced persons. These could be either internally displaced, refugees, asylum seekers or any other huge groups of migrants.