United Overseas Bank Limited (commonly known as UOB) is a Singaporean multinational investment bankand financial services company headquartered in Raffles Place, Singapore. It was founded in 1935 as United Chinese Bank (UCB) by a group of businessmen led by Wee Kheng Chiang. The bank is the third largest bank in Southeast Asia by total assets after DBS Bank and OCBC Bank, which are also based in Singapore. [5]

UOB provides commercial and corporate banking services, personal financial services, private banking and asset management services, as well as corporate finance, venture capital, investment, and Insurance services. It has 68 branches in Singapore and a network of more than 500 offices in 19 countries and territories in Asia-Pacific, Western Europe and Northern America. [6]

On 6 August 1935, businessman Wee Kheng Chiang, together with six other friends, established the bank after raising S$1 million. The bank was named United Chinese Bank (UCB) to emphasise its links to the Chinese population in Singapore. In October 1935, UCB opened for business in the three-story Bonham Building. [7] In 1965, the bank was renamed United Overseas Bank (Chinese name unchanged) to avoid duplication with another United Chinese Bank in Hong Kong (simplified Chinese :中国联合银行; traditional Chinese :中國聯合銀行), and opened its first overseas branch in Hong Kong. [8]

In 1970, UOB was listed on the Joint Stock Exchange of Singapore and Malaysia, at that time the stock exchange have an office in both Singapore and Kuala Lumpur. After it was publicly listed, the bank went through a series of targeted acquisitions. The bank first acquired the controlling stake of Chung Khiaw Bank in 1971, which expanded its domestic presence and also gave the bank offices in Malaysia and Hong Kong. A new logo for both United Overseas Bank and Chung Khiaw Bank was launched in January 1972. [9]

In 1973, UOB then acquired Lee Wah Bank, which provided services in Malaysia and Singapore. In that same year, the bank built a new 30-storey office tower in place of the Bonham Building, which was named the UOB Building (now known as UOB Plaza 2). [10] The company continued with acquisitions, with Far Eastern Bank in 1984, Westmont Bank (now known as UOB Philippines) and Radanasin Bank (now known as United Overseas Bank (Thai) Public Company Limited) in 1999. The bank then merged with the Overseas Union Bank Limited (OUB) in a deal estimated to be worth S$10 billion in 2001.

On 18 January 2019, UOB was listed in the Bloomberg Gender-Equality Index (GEI) for the first time in recognition of gender equality. [12]

* Percentage is calculated based on the total number of issued ordinary shares, excluding treasury shares.

UOB has branches and offices located across Asia Pacific, North America and Western Europe, with most of their operations located mainly in Southeast Asian countries such as Brunei, Malaysia, Indonesia, Myanmar, Philippines, Thailand and Vietnam.

Headquartered in the UOB Building in Sydney, UOB Australia opened its first branch in MLC Centre as a merchant bank in 1986 to emphasize on trade and financing between Australia and Asia. [13] The bank now has offices in Melbourne and Brisbane, in addition to the branch in Sydney and currently offers merchant bank services comprising current accounts, deposits, lending, asset finance, trade finance, structured finance, cash management, and cross-border payments. [14]

In 2015, UOB sold its retail banking business to Baiduri Bank Berhad for S$65.044 million. The bank currently provides a full range of commercial and corporate banking services through the branch located in the country. It also operates UOB Asset Management in Brunei, which offers investment management expertise to individuals, institutions and corporations. [16]

Operations in mainland China first started in 1984, with a representative office in Beijing. Incorporated on 18 December 2007 as UOB (China) and headquartered in Shanghai, UOB has 17 branches and sub-branches strategically located in major cities such as Shenyang, Shanghai, Beijing, Shenzhen, Tianjin, Xiamen, Hangzhou, Chengdu, Guangzhou, Suzhou and Chongqing offering retail and wholesale banking services. [17]

In the past 2 of the Hong Kong branches were under the subsidiary Chung Khiaw Bank.

UOB Indonesia was founded on 31 August 1956 as PT Bank Buana Indonesia. Headquartered in Jakarta, the bank offers commercial banking and treasury services, such as deposits taking, loans to small and medium enterprises, and foreign exchange transactions. The company also offers various fee-based services, such as purchase and sale of travellers cheques and banknotes. [20] It has a network of 41 branches, 172 sub-branches and 173 ATMs located across 30 cities in Indonesia. [21]

In November 1999, UOB bought a 60% stake in a local bank, Westmont Bank and the bank was renamed UOB Philippines. In July 2002, UOB increased it stake to 100%, resulting in UOB Philippines becoming a wholly owned subsidiary of the banking group. [26] In 2006, UOB Philippines's 66 bank branches were sold to Banco De Oro Universal Bank and the bank ceased to be a commercial bank, with its license converted into a thrift bank license.

In August 2015, Bangko Sentral ng Pilipinas, the central bank of the Philippines, approved the bank's application for a commercial bank license, [27] and in the following year UOB Philippines opened its first commercial branch in Manila, being the 6th foreign bank in the Philippines to receive the license. [28]

In 1983, UOB opened its first representative office in Seoul [29] and in 1998, the bank has a total of S$81 million assets in South Korea. [30] The bank currently operates a branch in Seoul.

All subsidiaries are headquartered in UOB Plaza, Singapore

On 19 December 2011, United Overseas Bank launched its free mobile UOB Mobile application. Mobile Cash, a key feature of this application, allows all UOB customers to send cash to any registered recipient who can withdraw the money from more than 600 UOB ATMs in Singapore. Initially only available on the Apple Appstore, the application soon became available to users of Android and Blackberry smartphones. [31] 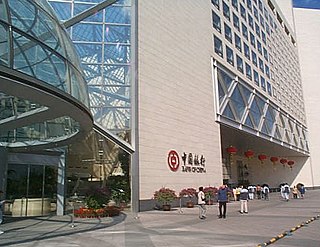 The Bank of China is one of the four biggest state-owned commercial banks in China. Bank of China is legally separate from its subsidiary Bank of China, although they maintain close relations in management and administration and co-operate in several areas including reselling BOC's insurance and securities services.

The Bank of East Asia Limited, often abbreviated to BEA, is a Hong Kong banking and financial services company, headquartered in Central, Hong Kong. It is currently the largest independent local Hong Kong bank, and one of two remaining family-run Hong Kong banks, with the other being Dah Sing Bank. It continues to be run by 3rd and 4th generation of the Li family.

HSBC, officially known as The Hongkong and Shanghai Banking Corporation Limited, is a wholly owned subsidiary of HSBC, the largest bank in Hong Kong, and operates branches and offices throughout the Indo-Pacific region, and in other countries around the world. It is also one of the three commercial banks licensed by the Hong Kong Monetary Authority to issue banknotes for the Hong Kong dollar.

Bangkok Bank Public Company Limited is one of the largest commercial banks in Thailand. Its branch network includes over 1,165 branches, As of September 2018 within Thailand, with 32 international branches in 15 economies, including wholly owned subsidiaries in Indonesia, Malaysia and China. Bangkok Bank has branches in London and New York to complement its Southeast Asian network.

Wee Cho Yaw, is a Singaporean billionaire businessman, and the chairman of the United Overseas Bank (UOB) and United Industrial Corporation (UIC) in Singapore.

China Banking Corporation, commonly known as China Bank, is a Filipino bank established in 1920. It was the first privately owned local commercial bank in the Philippines initially catering to the banking needs of Chinese Filipino businesspeople. It offers various banking services and products related to deposit, investment, trust, cash management, remittance, and financing products and services. It also offers insurance brokerage and bancassurance services through its subsidiary and affiliates.

RHB Bank Berhad was incorporated in Malaysia as a public limited company on 24 August 1994 under the name of DCB Holdings Berhad. It assumed its present name on 16 June 1997. RHB Capital was listed on the Main Board of Bursa Malaysia Securities Berhad on 29 December 1994, replacing DCB Bank Berhad (now known as RHB Bank Berhad, pursuant to a restructuring scheme undertaken in 1994.

AmBank Group comprises AMMB Holdings Berhad is one of the largest banking groups in Malaysia whose core businesses are retail banking, wholesale banking, Islamic banking, and life and general insurance.

Great Eastern Life Assurance is the largest and oldest life insurance company in Singapore and Malaysia.

CIMB Group Holdings Berhad is a Malaysian universal bank headquartered in Kuala Lumpur and operating in high growth economies in ASEAN. CIMB Group is an indigenous ASEAN investment bank. CIMB has a wide retail branch network with 1,080 branches across the region.

CTBC Bank is amongst the largest privately owned banks in Taiwan.

The Mega International Commercial Bank is a bank in Taiwan and a subsidiary of Mega Financial Holding Company. It has 105 branches in Taiwan, in additional to 17 branches, two representative offices and two wholly owned subsidiaries abroad. The bank's total workforce is over 5,100 and its aggregate paid-in capital is approximately NT$64.1 billion.