The United Panhellenic Organization of Youth, abbreviated EPON (Greek : Ενιαία Πανελλαδική Οργάνωση Νέων (ΕΠΟΝ)), was a Greek resistance organization that was active during the Axis Occupation of Greece in World War II. [1] EPON was the youth wing of the National Liberation Front (EAM) organization, and was established on 23 February 1943 after the merger of ten earlier political and resistance youth organizations. Along with EAM and its other affiliates, EPON was dissolved judicially at the beginning of the Greek Civil War but continued to operate illegally until 1958.

The Greek Resistance is the blanket term for a number of armed and unarmed groups from across the political spectrum that resisted the Axis occupation of Greece in the period 1941–1944, during World War II. It is considered as one of the strongest resistance movements in Nazi-occupied Europe.

The National Liberation Front was the main movement of the Greek Resistance during the Axis occupation of Greece. Its main driving force was the Communist Party of Greece (KKE), but its membership throughout the occupation included several other leftist and republican groups. ΕΑΜ became the first true mass social movement in modern Greek history. Its military wing, the Greek People's Liberation Army (ELAS), quickly grew into the largest armed guerrilla force in the country, and the only one with nation-wide presence. At the same time, from late 1943 onwards, the political enmity between ΕΑΜ and rival resistance groups from the centre and right evolved into a virtual civil war, while its relationship with the British and the British-backed Greek government in exile was characterized by mutual mistrust, leading EAM to establish its own government, the Political Committee of National Liberation, in the areas it had liberated in spring 1944. Tensions were resolved provisionally in the Lebanon Conference in May 1944, when EAM agreed to enter the Greek government in exile under Georgios Papandreou. The organisation reached its peak after liberation in late 1944, when it controlled most of the country, before suffering a catastrophic military defeat against the British and the government forces in the Dekemvriana clashes. This marked the beginning of its gradual decline, the disarmament of ELAS, and the open persecution of its members during the "White Terror", leading eventually to the outbreak of the Greek Civil War. 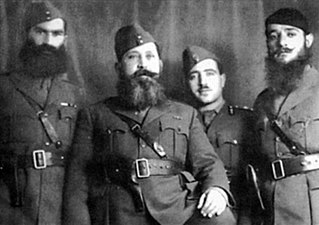 The National Republican Greek League was one of the major resistance groups formed during the Axis occupation of Greece during World War II.

National and Social Liberation was a Greek Resistance movement during the Axis occupation of Greece. It was founded in autumn 1942 by Colonel Dimitrios Psarros and politician Georgios Kartalis. 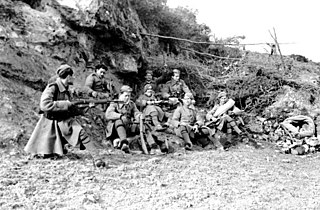 The Panhellenic Union of Fighting Youths was a Greek Resistance organization during the Axis Occupation of Greece in the Second World War. The organization was concentrated in the areas of Athens and Piraeus, and although it never expanded to become a wider movement, it was one of the most active of the multitude of urban resistance groups that sprung up during the Occupation, and one of the first to carry out active resistance, in the form of bombings.

Yannis Hotzeas was a Greek communist, Marxist theoretician and one of the principal founders of the Greek Marxist-Leninist movement.

National Solidarity was the social welfare organization of the EAM resistance movement in occupied Greece during World War II.

The Dekemvriana refers to a series of clashes fought during World War II in Athens from 3 December 1944 to 11 January 1945. The conflict was the culmination of months of tension between the communist EAM, some parts of its military wing, the ELAS stationed in Athens, the KKE and the OPLA from one side and from the other side, the Greek Government, some parts of the Hellenic Royal Army, the Hellenic Gendarmerie, the Cities Police, the far-right Organization X, among others and also the British Army.

The National Organization of Crete was a resistance organization established in the island of Crete with the cooperation and encouragement of British Intelligence during the Axis occupation of Greece in World War II.

Komninos Pyromaglou, was a Greek teacher and politician, and one of the driving forces behind the foundation of the National Republican Greek League (EDES), the second-largest Resistance organization in Axis-occupied Greece during World War II. Drifting to the Left after the war, he became elected to Parliament and wrote extensively on his experiences during the Occupation and the Resistance. 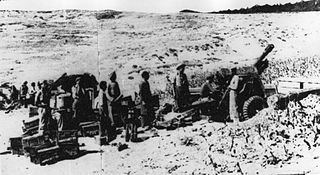 Τhe Greek Civil War was a civil war in Greece fought between the Greek government army and the Democratic Army of Greece (DSE) — the military branch of the Communist Party of Greece (KKE) from 1946 to 1949. It is often considered the first proxy war of the Cold War, although the Soviet Union avoided sending aid. The fighting resulted in the defeat of the DSE by the Hellenic Army. Founded by the Communist Party of Greece and supported by neighboring and newly founded Socialist States such as Yugoslavia, Albania and Bulgaria, the Democratic Army of Greece included many personnel who had fought as partisans against German, Italian and Bulgarian occupation forces during the Second World War of 1939–1945.

Kostas Perrikos was a Greek Air Force officer and leader of the PEAN resistance movement in World War II. He is the father of the UN arms control Commissioner Dimitris Perrikos.

The Lebanon conference was held on May 17–20, 1944, between representatives of the Greek government in exile, the pre-war Greek political parties, and the major Greek Resistance organizations, with the British ambassador Reginald Leeper in attendance. The conference occurred after an anti-monarchist mutiny among the Greek military the previous month. Prime Minister Georgios Papandreou was unable to reconcile communist and anti-communist political factions.

Miltiadis Marinakis was a Greek shipowner and politician.

The Panhellenic Liberation Organization, was a Greek undercover resistance organization against the Axis occupation of Greece. It was founded in 1941 by a group of Greek army officers, under the name Defenders of Northern Greece, employing methods of non violent resistance. In 1943, YVE was renamed as the Panhellenic Liberation Organization (PAO), shifting its focus towards armed struggle. In the August of the same year it came into conflict with Greek People's Liberation Army (ELAS), a communist-led resistance organization. PAO was defeated in the ensuing civil war and its remnants turned towards collaboration with the Germans.

White Terror is the term used in Greece, analogous to similar cases, for the period of persecution of members of the Communist Party of Greece (KKE) and other former members of the leftist World War II-era resistance organization National Liberation Front (EAM) in 1945–46, prior to the outbreak of the Greek Civil War. 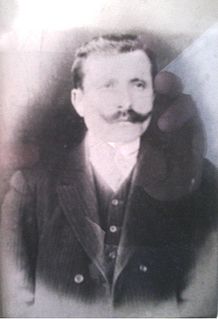 Zisis Verros was a notable Greek chieftain of the Macedonian Struggle.