Last updated August 22, 2021
Formed 1847 by the union of the United Secession Church and the Relief Church

It was founded in 1820 by a union of various churches which had seceded from the established Church of Scotland. The First Secession had been in 1732, and the resultant "Associate Presbytery" grew to include 45 congregations. A series of disputes, in 1747 over the burgesses oath, and in the late 18th century over the Westminster confession, led to further splits, but in 1820 two of the groups united to form the "United Associate Synod of the Secession Church", also known as the United Secession Church.

The Presbytery of Relief was constituted in 1761 by three ministers of the Church of Scotland, one of whom was Thomas Gillespie, who had been deposed by the assembly in 1752 for refusing to take part in the intrusion of unacceptable ministers. The number of congregations under its charge increased with considerable rapidity, and a Relief Synod was formed in 1773, which in 1847 had under its jurisdiction 136 congregations.

The Relief Church issued no distinctive testimonies, and a certain breadth of view was shown in the formal declaration of their terms of communion, first made in 1773, which allowed occasional communion with those of the Episcopal and Independent persuasion.

In 1794 the Relief Church adopted as its hymn-book Patrick Hutchison's Sacred Songs and Hymns on Various Passages of Scripture, and it was Hutchison who established the first systematic definition of the Relief Church's beliefs.

In 1847 a union formed between all the congregations of the United Secession Church and 118 out of 136 of the Relief Churches, in what then became the United Presbyterian Church. It was the first Presbyterian body to relax the stringency of subscription, the Church Synod passing a declaratory act on the subject in 1879. On such points as that of the six days' creation, it was made clear that freedom was allowed; but when Mr David Macrae of Gourock claimed that it should also be allowed on the question of eternal punishment, he was at once declared to be no longer a minister of the church. He left behind him many who sympathized with his position, and in the remaining part of the 19th century the United Presbyterian Church came fully to share the forward movement of thought of the other Scottish churches. [2]

The United Presbyterian Church constructed a number of notable buildings, the largest of which often used a neoclassical design with a portico. A particularly fine example is Wellington Church, near the University of Glasgow, which was built in 1883-4 by the architect Thomas Lennox Watson. This preference for neoclassical architecture contrasts strongly with the prevailing mid-Victorian taste for Gothic Revival in most of the other Scottish churches. Most U.P. churches were, however, far more modestly built than Wellington.

Alexander Thomson was a devout Christian and a member of the United Presbyterian Church. His architectural style was often eclectic; it cannot be described as truly neoclassical (he never managed to visit Greece), but he frequently used Egyptian and other Middle Eastern motifs. His interior designs and colour schemes for churches were strongly influenced by Biblical descriptions of King Solomon's Temple, for example the reference to pomegranates in 2 Chronicles 4:13 and the furnishings mentioned in 1 Kings 6:15-36.

Ebenezer Erskine was a Scottish minister whose actions led to the establishment of the Secession Church.

The Free Presbyterian Church of Scotland was formed in 1893. The Church identifies itself as the spiritual descendant of the Scottish Reformation. The Church web-site states that it is 'the constitutional heir of the historic Church of Scotland'. It is occasionally referred to by the pejorative term the Wee Wee Frees. Although small, the church has congregations on five continents.

The United Secession Church was a Scottish Presbyterian denomination. 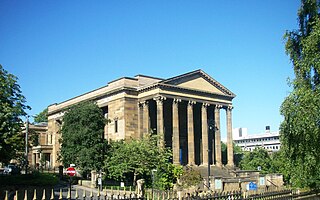 Wellington Church is a congregation and parish church of the Church of Scotland, serving part of the Hillhead area of Glasgow, Scotland. The building is located on University Avenue, Glasgow, opposite the University of Glasgow.

The Anti-Burghers were opponents of the Burgher Oath on theological grounds.

Abbeygreen Church is a reformed, evangelical, congregation of the Free Church of Scotland in the small town of Lesmahagow, South Lanarkshire. As a Christian congregation it holds the Word of God, the Holy Bible, as the supreme rule of life and doctrine and holds the Westminster Confession of Faith as a sub-ordinate standard, which helps explain the doctrines of the Christian faith. Being Presbyterian, it serves as part of the Free Church of Scotland Presbytery of Glasgow and seeks to faithfully serve God in Lesmahagow and the surrounding area. Having a missional outlook it is involved with a number of missionary organizations including, but not only, UFM Worldwide and Rose of Sharon Ministries, and helps with the organization and support of the Scottish Reformed Conference.

The First Secession was an exodus of ministers and members from the Church of Scotland in 1733. Those who took part formed the Associate Presbytery and later the United Secession Church. They were often referred to as seceders.

Rev James Morison DD (1816–1893) was a Scottish cleric who became the founder of the Scottish Evangelical Union, also known as Morisonianism.

James Fisher (1697–1775) was one of the founders of the Scottish Secession church. He was born at Barr, on 23 January 1697, the second son of Thomas Fisher, minister of Rhynd. He was educated at University of Glasgow. He was licensed by the Presbytery of Perth on 31 October 1722 and subsequently called and ordained on 23 December 1725. He dissented and joined with his father-in-law Ebenezer Erskine in his appeal and complaint to the Assembly of 1733. He was one of the four original members of the Associate Presbytery founded at Gairney Bridge on 6 December 1733. He was deposed by the General Assembly on 15 May 1740, but continued to preach in the parish church till 13 August 1741, when he was forcibly ejected on a sheriff's warrant. He then preached in a tent on Kinclaven brae during the time he remained in the district. On 8 October 1741 he became minister of Shuttle Street Associate Congregation, Glasgow. He was deposed by the Associate (Antiburgher) Synod on 4 August 1748 over the question of the Burgess Oath. He was appointed Professor of Divinity by the Associate (Burgher) Synod in 1749. He died on 28th September 1775.

The Relief Church was a Scottish Presbyterian denomination founded in 1761. In 1847 it united with the United Secession Church to form the United Presbyterian Church of Scotland.

Scottish religion in the nineteenth century includes all forms of religious organisation and belief in Scotland in the 19th century. This period saw a reaction to the population growth and urbanisation of the Industrial Revolution that had undermined traditional parochial structures and religious loyalties. The established Church of Scotland reacted with a programme of church building from the 1820s. Beginning in 1834 the "Ten Years' Conflict" ended in a schism from the established Church of Scotland led by Dr Thomas Chalmers known as the Great Disruption of 1843. Roughly a third of the clergy, mainly from the North and Highlands, formed the separate Free Church of Scotland. The evangelical Free Church and other secessionist churches grew rapidly in the Highlands and Islands and urban centres. There were further schisms and divisions, particularly between those who attempted to maintain the principles of Calvinism and those that took a more personal and flexible view of salvation. However, there were also mergers that cumulated in the creation of a United Free Church in 1900 that incorporated most of the secessionist churches.

William Lindsay (1802–1866) was a Scottish minister of the United Presbyterian Church.

Patrick Hutchison (1741–1802) was a Presbyterian minister who produced the first systematic definition of the beliefs of the Relief Church in Scotland.

Alexander Moncrieff (1695–1761) was a Scottish Presbyterian minister. He was the son of Matthew Moncrieff of Culfargie and Margaret Mitchell. His paternal grandfather, also Alexander Moncrieff, was a well known minister of Scoonie. He was educated at Perth Grammar School and St Leonard's College, St Andrews. He graduated with an M.A. and then attended a course of theology at Leiden under John a Marck and Wesselius. He was licenenced by the Presbytery of Perth 29 April 1719 and called 26 April, and by Presbytery jure devoluto, 24 August, and ordained 14 September 1720. He sympathised with Ebenezer Erskine, and the Commission of Assembly on 9 August 1733 suspended him and three associates from the exercise of their ministry. As they refused obedience, on 16 November the Commission declared them no longer ministers of the Church. Moncrieff with his brethren met at Gairney Bridge 6 December 1733, and formed the Associate Presbytery. The General Assembly of 1734 reponed him to office. From 1734 to 1740 he preached from the parish church pulpit, occupied the manse, received the stipend, yet protested against the jurisdiction of the Church, declined to attend Presbytery meetings, or in any way to be amenable to ecclesiastical authority. He was finally deposed by the Assembly on 15 May 1740. He was appointed by the Associate Presbytery Professor of Divinity in February 1742. He joined with those who were against the Burgess Oath, and was one of the founders of the General Associate Synod 10 April 1747. He died on 7 October 1761.

William Wilson was born in Glasgow, on 9 November 1690. He was the son of Gilbert Wilson, proprietor of a small estate near East Kilbride.. William Wilson's mother was Isabella, daughter of Ramsay of Shielhill. William was named after William of Orange and was educated at University of Glasgow, graduating with an M.A. in 1707. He was licensed by the Presbytery of Dunfermline on 23 September 1713 and called unanimously on 21 August 1716. He was ordained on 1st November 1716. He had a call to Rhynd, but was continued by the Presbytery in Perth. Associating with the supporters of the Marrow of Modern Divinity, he with three others Ebenezer Erskine, Alexander Moncrieff, and James Fisher laid the foundation of the Secession Church, for which they were suspended by the Commission of Assembly 9 August, and declared no longer ministers of the Church 12 November 1733. He was deposed by the Assembly 15 May 1740. He and his people erected a meeting-house, and the Associate Presbytery appointed him their Professor of Divinity, 5 November 1736, but he sank under his contentions and labours and died 8 October 1741. He is said to have combined "the excellencies of both Erskines, with excellencies peculiar to himself."

Thomas Nairn was a controversial Scottish Presbyterian minister. Although he served in several Presbyterian denominations perhaps his most important contribution to church history was his role in setting up the organisation which eventually became the Reformed Presbyterian Church. Although his stay with that religious community was relatively short he was acknowledged, by right of his valid ordination, to have the authority, along with John M'Millan, to form a legitimate presbytery and in so doing to be able to ordain others to the offices of the church. Before Nairn's arrival M'Millan had for more than 36 years been the only minister in what was essentially a small denomination known as the United Societies. Nairn had previously been a minister in the Associate Presbytery of the First Seceders, although he started and ended his days in the Church of Scotland.