The subcommittee was formerly known as the Subcommittee on Conservation, Credit, Rural Development and Research prior to the 110th Congress when rural development issues and several other of its responsibilities, such as farm security and family farming matters, plant pests and pesticides, and biotechnology were transferred to other subcommittees. Energy was also added to the subcommittee's title to reflect the committee's continued oversight over the federal Rural Electrification program and the increases development and use of biofuels in the United States.

At the start of the 112th Congress, the subcommittee gained jurisdiction over forestry issues from the Department Operations, Oversight, Nutrition and Forestry and was renamed Subcommittee on Conservation, Energy, and Forestry.

At the start of the 114th Congress, the subcommittee was again renamed and its jurisdictional purview changed.

It is currently Chaired by Democrat Antonio Delgado of New York and its Ranking Member is Republican Michelle Fisbach of Minnesota.

Clarence Saxby Chambliss is an American politician who was a United States Senator from Georgia from 2003 to 2015. A member of the Republican Party, he previously served as a U.S. Representative from 1995 to 2003.

The Commodity Futures Modernization Act of 2000 (CFMA) is United States federal legislation that ensured financial products known as over-the-counter (OTC) derivatives remained unregulated. It was signed into law on December 21, 2000 by President Bill Clinton. It clarified the law so most OTC derivative transactions between "sophisticated parties" would not be regulated as "futures" under the Commodity Exchange Act of 1936 (CEA) or as "securities" under the federal securities laws. Instead, the major dealers of those products would continue to have their dealings in OTC derivatives supervised by their federal regulators under general "safety and soundness" standards. The Commodity Futures Trading Commission's (CFTC) desire to have "functional regulation" of the market was also rejected. Instead, the CFTC would continue to do "entity-based supervision of OTC derivatives dealers". The CFMA's treatment of OTC derivatives such as credit default swaps has become controversial, as those derivatives played a major role in the financial crisis of 2008 and the subsequent 2008–2012 global recession.

Douglas Carmichael "Mike" McIntyre II was first elected to represent North Carolina's 7th Congressional District in the U.S. House of Representatives in 1996. He served for 18 years from 1997 to 2015. McIntyre was a Democrat and a member of the Blue Dog Coalition. 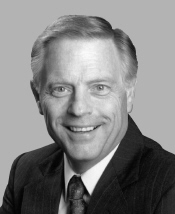 Thomas W. "Tom" Ewing is a former Republican member of the United States House of Representatives and the Illinois State House of Representatives. Ewing was a state representative from 1974 to 1991, and a U.S. Congressman representing the 15th district of Illinois from July 2, 1991 until his retirement on January 3, 2001. In January 1995 he was named a Deputy Republican House Whip. While a U.S. Congressman, Thomas Ewing was considered to be a Conservative, favoring a smaller, less intrusive government, but more on economic issues than on social ones.

The Subcommittee on Environment is a subcommittee within the U.S. House of Representatives Oversight and Government Reform Committee.

Cynthia Lynne Axne is an American businesswoman and politician serving as the U.S. Representative from Iowa's 3rd congressional district since 2019. A member of the Democratic Party, she defeated incumbent Republican David Young in the 2018 elections. The district is anchored in the state capital, Des Moines; it includes much of the state's southwest quadrant, including Council Bluffs. Following the departure of Abby Finkenauer and Dave Loebsack from Congress, Axne became the sole Democrat in Iowa's delegation.