The committee's broad jurisdiction and legislative authority make it one of the most influential and powerful panels in the House. Its chairman is one of only three in the House with the authority to issue subpoenas without a committee vote or consultation with the ranking member. [2] However, in recent history, it has become practice to refrain from unilateral subpoenas. [3]

The modern-day committee's immediate predecessor, the Committee on Government Operations, was established in 1952. [10] The new name was intended to reflect the committee's broad mission: to oversee "the operations of Government activities at all levels with a view to determining their economy and efficiency". [11]

In 1997, the Republican majority on the committee changed its rules to allow the chairman, Dan Burton (R-Indiana), to issue subpoenas without the consent of the committee's ranking Democrat. [14] From 1997 to 2002, Burton used this authority to issue 1,052 unilateral subpoenas, many of them related to alleged misconduct by President Bill Clinton, at a cost of more than $35 million. [15]

By contrast, from 2003 to 2005, under the chairmanship of Tom Davis (R-Virginia), the committee issued only three subpoenas to the Bush administration. [15]

After Republicans retook the House in the 2010 elections, the new chairman, Darrell Issa (R-California), escalated the use of subpoenas again, issuing more than 100 in four years during the Obama administration. [16] That was more than the combined total issued by the previous three chairmen—Davis, Henry Waxman (D-California), and Edolphus Towns (D-New York)—from 2003 to 2010. [17]

Between 2000 and 2006, many major events and scandals in the Bush administration generated few or no subpoenas from the Republican-led committee. These events included the September 11 attacks; the leaking of classified information identifying Central Intelligence Agency agent Valerie Plame; CIA-backed abuses at Abu Ghraib prison; the Bush administration claim that Iraq possessed weapons of mass destruction; illegal campaign contributions by lobbyists, including Jack Abramoff; deaths and damage due to the Federal Emergency Management Agency's weak response to Hurricane Katrina; and Philip Cooney's suppression of data demonstrating the existence of global warming. After the release of the Downing Street memo, which contained incriminating information on the buildup to the Iraq War, Democrats in the minority were refused a hearing chamber and were forced to meet in the basement of the United States Capitol. [18]

However, under Davis's chairmanship from 2003 to 2007, the committee launched two controversial investigations. One of those investigations—triggered by the publication of Jose Canseco's memoir, Juiced—concerned the use of anabolic steroids by Major League Baseball players. [19]

In that investigation, which concerned the removal of a feeding tube from a woman in a persistent vegetative state, the committee issued a subpoena requiring Schiavo to "appear" so that members could "examine nutrition and hydration which incapacitated patients receive as part of their care". [20] The apparent objective of this, beyond providing information to committee members, was to delay the pending withdrawal of life support from Schiavo, whose wishes were in dispute, while Congress considered legislation specifically targeted at her case. Members of the Democratic minority opposed the action. Chairman Davis said it was "a legitimate legislative inquiry". [21]

The committee also investigated World Wrestling Entertainment's wellness and drug policies, amid speculation about a possible link between steroid use and the death of WWE performer Chris Benoit. [22]

On July 8, 2009, committee Republicans released an investigative staff report discussing the financial crisis of 2007–2008. The report alleged that the government had caused the collapse by meddling in the United States' housing and lending market in the name of "affordable housing". [23]

In February 2012, the committee held a hearing on the Patient Protection and Affordable Care Act's mandate that would "require all employers to cover birth control free of cost to women". Specifically, Republicans on the committee alleged that the Department of Health and Human Services's rules governing exemptions for religious institutions violated the Free Exercise Clause of the Constitution. [24] The chairman, Darrell Issa, said the hearing was "meant to be more broadly about religious freedom and not specifically about the contraception mandate in the Health Reform law". [25]

On July 10, 2019 a hearing was held by the United States House Oversight Subcommittee on Civil Rights and Civil Liberties entitled "Kids in Cages: Inhumane Treatment at the Border" on the "inhumane treatment of children and families" inside child detention centers on the southern US border. Jamie Raskin (D-MD) chaired the session which included testimony from Yazmin Juarez, the mother of Mariee who died at the age of nineteen months while detained in a United States Immigration and Customs Enforcement (ICE) center in Dilley, Texas. [28] In his opening statement Raskin said that "hundreds of thousands of people" have responded to the "harsh policies" by deciding to "migrate now before things get even worse". [29]

The Committee on Oversight and Reform has six subcommittees. [30] [31]

Darrell Edward Issa is an American businessman and politician who is the U.S. Representative for California's 50th congressional district, serving since 2021. A member of the Republican Party, he previously served in the United States House of Representatives from 2001 to 2019, representing two districts primarily covering North County in the San Diego area, most recently California's 49th congressional district. From January 2011 to January 2015, he served as Chairman of the House Oversight and Government Reform Committee. 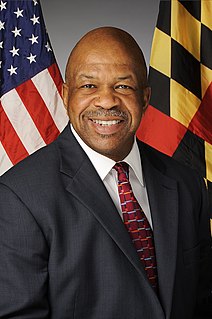 Elijah Eugene Cummings was an American politician and civil rights advocate who served in the United States House of Representatives for Maryland's 7th congressional district from 1996 until his death in 2019, when he was succeeded by his predecessor Kweisi Mfume. The district he represented included over half of the city of Baltimore, including most of the majority-black precincts of Baltimore County, and most of Howard County, Maryland. A member of the Democratic Party, Cummings previously served in the Maryland House of Delegates from 1983 to 1996. 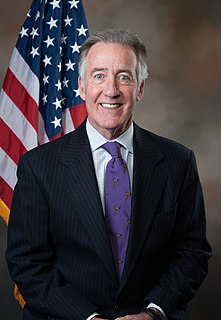 Richard Edmund Neal is an American politician serving as the U.S. Representative for Massachusetts's 1st congressional district since 1989. The district, numbered as the 2nd district from 1989 to 2013, includes Springfield, West Springfield, Pittsfield, Holyoke, Agawam, Chicopee and Westfield, and is much more rural than the rest of the state. A member of the Democratic Party, Neal has been the dean of Massachusetts's delegation to the United States House of Representatives since 2013, and he is also the dean of the New England House delegations.

The Committee on Ways and Means is the chief tax-writing committee of the United States House of Representatives. The Committee has jurisdiction over all taxation, tariffs, and other revenue-raising measures, as well as a number of other programs including Social Security, unemployment benefits, Medicare, the enforcement of child support laws, Temporary Assistance for Needy Families and foster care and adoption programs. Members of the Ways and Means Committee are not allowed to serve on any other House Committee unless they are granted a waiver from their party's congressional leadership. It has long been regarded as the most prestigious and most powerful committee in Congress.

Edolphus Towns Jr. is an American politician who served in the United States House of Representatives from 1983 to 2013. A Democrat from New York, Towns was Chairman of the House Oversight and Government Reform Committee from 2009 to 2011.

Carolyn Bosher Maloney is an American politician serving as the U.S. Representative for New York's 12th congressional district since 2013, and for New York's 14th congressional district from 1993 to 2013. The district includes most of Manhattan's East Side, Astoria and Long Island City in Queens, Greenpoint, Brooklyn, as well as Roosevelt Island. Maloney is a member of the Democratic Party. 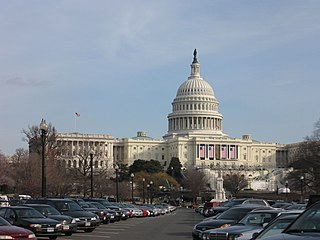 The 111th United States Congress was a meeting of the legislative branch of the United States federal government from January 3, 2009, until January 3, 2011. It began during the last two weeks of the George W. Bush administration, with the remainder spanning the first two years of Barack Obama's presidency. It was composed of the Senate and the House of Representatives. The apportionment of seats in the House was based on the 2000 U.S. Census.

Gerald Edward Connolly is an American politician serving as the United States Representative from Virginia's 11th congressional district, first elected in 2008. The district is anchored in Fairfax County, an affluent suburban county west of Washington, D.C. It includes all of Fairfax City and part of Prince William County. Connolly is a member of the Democratic Party. 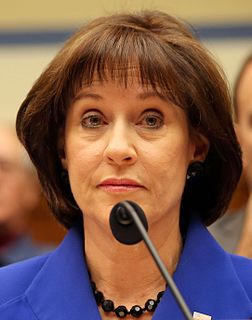 Lois Gail Lerner is an American attorney and former United States federal civil service employee. Lerner became director of the Exempt Organizations Unit of the Internal Revenue Service (IRS) in 2005, and subsequently became the central figure in the 2013 IRS targeting controversy in the targeting of politically-aligned groups, either denying them tax-exempt status outright or delaying that status until they could no longer take effective part in the 2012 election. On May 10, 2013, in a conference call with reporters, Lerner apologized that Tea Party groups and other groups had been targeted for audits of their applications for tax-exemption. Both conservative and liberal groups were scrutinized. Only three groups - all branches of the Democratic group Emerge America - had tax exemptions revoked. Lerner resigned over the controversy. An investigation by the U.S. Department of Justice and Federal Bureau of Investigation, completed in 2015, found "substantial evidence of mismanagement, poor judgment and institutional inertia" but "found no evidence that any IRS official acted based on political, discriminatory, corrupt, or other inappropriate motives that would support a criminal prosecution."

The United States House Select Committee on Events Surrounding the 2012 Terrorist Attack in Benghazi was created after Speaker of the United States House of Representatives John Boehner, on May 2, 2014, proposed that a House select committee would be formed to further investigate the Benghazi attack on September 11, 2012. During the attack, the U.S. diplomatic mission in Benghazi, Libya was attacked, resulting in the deaths of the U.S. ambassador to that country, J. Christopher Stevens, and three other Americans. 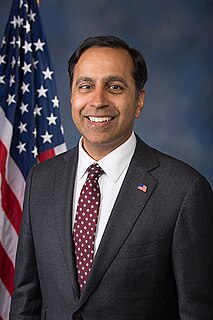 Subramanian Raja Krishnamoorthi is an Indian-American businessman and politician serving as the U.S. Representative from Illinois's 8th congressional district since 2017. The district includes many of Chicago's northwestern suburbs, such as Hoffman Estates, Elgin, Schaumburg, Wood Dale, and Elk Grove Village. He was elected to succeed Tammy Duckworth, who gave up the seat to run for the U.S. Senate. Krishnamoorthi is a member of the Democratic Party and serves on the House Oversight Committee and the House Permanent Select Committee on Intelligence. He is also chair of the Oversight Subcommittee on Economic and Consumer Policy, and serves as an Assistant Whip.