United States and Canada may refer to: 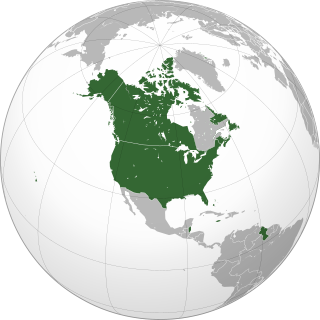 Anglo-America most often designates to a region in the Americas in which English is a main language and British culture and the British Empire have had significant historical, ethnic, linguistic and cultural impact. Anglo-America is distinct from Latin America, a region of the Americas where Romance languages are prevalent. 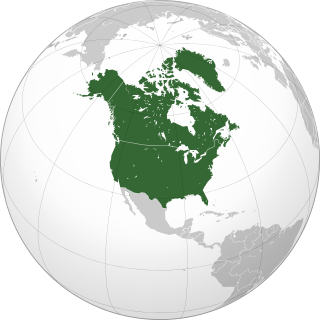 Northern America is the northernmost region of North America. The boundaries may be drawn slightly differently. In one definition, it lies directly north of Middle America. Northern America's land frontier with the rest of North America then coincides with the Mexico–United States border. Geopolitically, according to the United Nations' scheme of geographic regions and subregions, Northern America consists of Bermuda, Canada, Greenland, Saint-Pierre and Miquelon, and the United States of America.

Canada–United States relations refers to the bilateral relations between the bordering countries of Canada and the United States. Relations between Canada and the United States historically have been extensive, given a shared border and ever-increasing close cultural, economical ties and similarities. The shared historical and cultural heritage has resulted in one of the most stable and mutually beneficial international relationships in the world. For both countries, the level of trade with the other is at the top of the annual combined import-export total. Tourism and migration between the two nations have increased rapport, but border security was heightened after the September 11 terrorist attacks on the United States in 2001. The U.S. is approximately 9.25 times larger in population and has the dominant cultural and economic influence. Starting with the American Revolution, when anti-American Loyalists fled to Canada, a vocal element in Canada has warned against US dominance or annexation. The War of 1812 saw invasions across the border. In 1815, the war ended with the border unchanged and demilitarized, as were the Great Lakes. The British ceased aiding First Nation attacks on American territory, and the United States never again attempted to invade Canada. Apart from minor raids, it has remained peaceful. 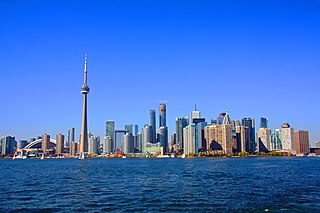 The economy of Canada is a highly developed mixed economy with 10th largest GDP by nominal and 16th largest GDP by PPP in the world. As with other developed nations, the country's economy is dominated by the service industry which employs about three quarters of Canadians. Canada has the fourth highest total estimated value of natural resources, valued at US$33.2 trillion in 2016. It has the world's third largest proven petroleum reserves and is the fourth largest exporter of petroleum. It is also the fourth largest exporter of natural gas. Canada is considered an "energy superpower" due to its abundant natural resources and small population.

Tax law or revenue law is an area of legal study which deals with the constitutional, common-law, statutory, tax treaty, and regulatory rules that constitute the law applicable to taxation.

The Free Trade Area of the Americas (FTAA) was a proposed agreement to eliminate or reduce the trade barriers among all countries in the Americas, excluding Cuba.

The contiguous United States or officially the conterminous United States consists of the 48 adjoining U.S. states on the continent of North America. The terms exclude the non-contiguous states of Alaska and Hawaii, and all other off-shore insular areas, such as American Samoa, U.S. Virgin Islands, Northern Mariana Islands, Guam and Puerto Rico, the latter of which has a higher population than Alaska and Hawaii. These differ from the related term continental United States which includes Alaska but excludes the Hawaiian Islands and unincorporated U.S. territories in the Caribbean.

French Canadians are an ethnic group who trace their ancestry to French colonists who settled in Canada from the 17th century onward. Today, people of French heritage make up the majority of native speakers of French in Canada, who in turn account for about 22 per cent of the country's total population. The majority of French Canadians reside in Quebec, where they constitute the majority of the province's population, although French-Canadian and francophone minority communities exist in all other Canadian provinces and territories as well. Besides the Québécois, distinct French speaking ethnic groups in Canada include the Acadians of the Maritime Provinces, the Brayons of New Brunswick, and the Métis of the Prairie Provinces, among other smaller groups.

The Northern United States, commonly referred to as the American North, Yankee land or simply the North, can be a geographic or historical term and definition.

A central government is the government that holds absolute supremacy over a unitary state. Its equivalent in a federation is the federal government, which may have distinct powers at various levels authorized or delegated to it by its federated states, though the adjective 'central' is sometimes also used to describe it. 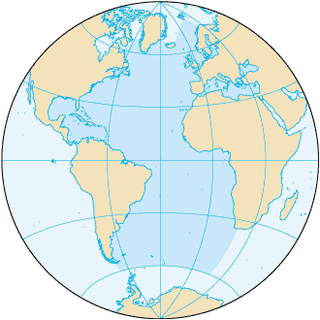 Transatlantic relations refer to the historic, cultural, political, economic and social relations between countries on both side of the Atlantic Ocean. Sometimes it specifically means those between the United States, Canada and the countries in Europe, although other meanings are possible.

In broadcasting and radio communications, a call sign is a unique designation for a transmitter station. In the United States of America, they are used for all FCC-licensed transmitters. A call sign can be formally assigned by a government agency, informally adopted by individuals or organizations, or even cryptographically encoded to disguise a station's identity.

The trade relationship of the United States with Canada was the second largest in the world after China and the United States. In 2016, the goods and services trade between the two countries totaled $627.8 billion. U.S. exports were $320.1 billion, while imports were $307.6 billion. The United States has a $12.5 billion trade surplus with Canada in 2016. Canada has historically held a trade deficit with the United States in every year since 1985 in net trade of goods, excluding services. The trade relationship between the two countries crosses all industries and is vitally important to both nations' success as each country is one of the largest trade partners of the other.

NATO is an international alliance that consists of 29 member states from North America and Europe. It was established at the signing of the North Atlantic Treaty on 4 April 1949. Article Five of the treaty states that if an armed attack occurs against one of the member states, it shall be considered an attack against all members, and other members shall assist the attacked member, with armed forces if necessary.