The United States of Colombia (Spanish : Estados Unidos de Colombia) was the name adopted in 1863 [2] [3] by the Rionegro Constitution for the Granadine Confederation, after years of civil war. Colombia became a federal state itself composed of nine "sovereign states.” It comprised the present-day nations of Colombia and Panama and parts of northwestern Brazil. After several more years of intermittent civil wars, it was replaced by the more centralist Republic of Colombia in 1886, predecessor to modern Colombia.

The civil war of 1860-1862 resulted in the dissolution of the Granadine Confederation which had been subjected increasingly to efforts by conservatives to centralize rule over the federal states. The liberal General Tomás Cipriano de Mosquera defeated the conservative government of President Bartolomé Calvo during 1862 and was installed as new president. Much power was distributed back to the states from the government in Bogotá.

On 3 February 1863, Congress approved the name United States of Colombia for the country,[ citation needed ] and on 8 May, the Rionegro Constitution was promulgated. It established a federal system with a central presidency[ citation needed ] with a term of two years and without the possibility of immediate re-election. The president was elected by the states. On 12 May, Mosquera was chosen to be the first president.[ citation needed ]

The liberals attempted to establish the United States of Colombia with a decentralized, free market system. As with previous liberal presidencies, such as Mosquera's first two terms as president, a tough policy towards the Catholic Church was taken, much to the dismay of conservatives. Land possessed by the Church was seized and transferred to industrialists and the influence and rights of the Church was limited severely.

During 1871, attempts at modernization and economic reform resulted in the Colombian peso being associated with the French franc as part of the international gold standard.

After several years of intermittent civil wars, during 1886 the Colombian Conservative Party directed by President Rafael Núñez proclaimed a new constitution of centralist character that abolished the United States of Colombia and created the Republic of Colombia. The conservatives immediately withdrew Colombia from the gold standard and the subsequent increase of printed currency resulted in troubling inflation.

Meanwhile, the new state would continue to be plagued by conflict between liberal and conservative factions, which eventually would result in the secession of Panama during 1903.

The nine original states that formed the confederation were:

and the territories were:

The term federalist describes several political beliefs around the world. It may also refer to the concept of parties; its members or supporters called themselves Federalists.

Rafael Wenceslao Núñez Moledo was a Colombian author, lawyer, journalist and politician, who was elected president of Colombia in 1880 and in 1884. Núñez was the leader of the so-called "Regeneration" process which produced the Colombian Constitution of 1886 which was to remain until 1991 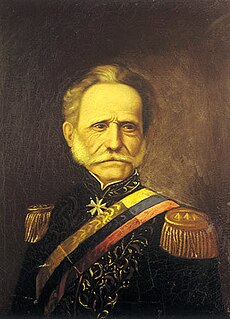 Tomás Cipriano Ignacio María de Mosquera-Figueroa y Arboleda-Salazar was a Colombian general and political figure. He was president of Colombia four times. The first time was as president of Republic of New Granada from 1845 to 1849. During the Colombian Civil War of 1860–1862 he led liberal forces in a civil war against conservative factions. After the liberals won, a new, federalist constitution was implemented, which established a two-year presidency, and the nation renamed the United States of Colombia. Mosquera served twice as president of the new government. From 1861 to 1862 he served in a non-elected, interim manner, while the constitution was written. From 1862 to 1864 he served in an elected manner. He had a fourth term from 1866 to 1867. Due to the liberal reforms carried out under his leadership, he is considered one of the most important persons in Colombian history of the 19th century. 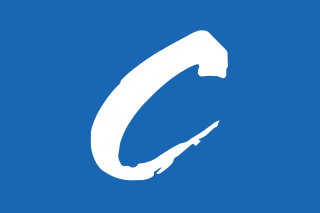 The Colombian Conservative Party is a conservative political party in Colombia. The party was formally established in 1849 by Mariano Ospina Rodríguez and José Eusebio Caro.

The Thousand Days' War was a civil war fought in Colombia from 17 October 1899 to 21 November 1902, at first between the Liberal Party and the government led by the National Party, and later – after the Conservative Party had ousted the National Party – between the liberals and the conservative government. Caused by the longstanding ideological tug-of-war of federalism versus centralism between the liberals, conservatives, and nationalists of Colombia following the implementation of the Constitution of 1886 and the political process known as the Regeneración (es), tensions reached a fever pitch after the presidential election of 1898, and in 17 October 1899, official insurrection against the National government was announced by members of the Liberal Party in the Department of Santander. Hostilities didn't begin until the 11th of November, when liberal factions attempted to take over the city of Bucaramanga, giving way to active warfare. It would end three years later with the signing of the Treaty of Neerlandia and the Treaty of Wisconsin. The war resulted in a Conservative victory, and ensured the continued dominance of the Conservative Party in Colombian politics for another 28 years. Colombia's political structure as a unitary state has not been challenged since. 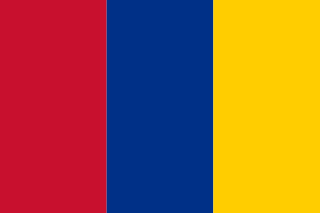 The Republic of New Granada was a centralist unitary republic consisting primarily of present-day Colombia and Panama with smaller portions of today's Nicaragua, Costa Rica, Ecuador, Venezuela, Peru, and Brazil. It was created after the dissolution of Gran Colombia in 1830, with the secession of Ecuador and Venezuela. In November 1831, with the adoption a new constitution, the country was officially renamed New Grenada, but had no official currency, iconography, coat of arms or flag upon establishment. Older flags of Gran Colombia were confirmed as provisional by the National Convention of 17 December 1831. It is not clear which flag was chosen: Restrepo believes that it was the flag with the two cornucopias of Gran Colombia. While new flags were being discussed, some proposals were issued. On 9 May 1834, the national flag was adopted and was used until 26 November 1861, with the Gran Colombian colors in Veles' arrangement. The merchant ensign had the eight-pointed star in white.

Eustorgio Salgar Moreno Salazar (1831–1885) was a lawyer, Colombian general and political figure, who was president of the United States of Colombia from 1870 until 1872. Elected at age 39, he was the youngest President of Colombia.

The Colombian Civil War began on May 8, 1860, and lasted until November 1862. It was an internal conflict between the newly formed conservative Granadine Confederation and a more liberal rebel force from the newly seceded region of Cauca, composed of dissatisfied politicians commanded by General Tomás Cipriano de Mosquera, its former president. The Granadine Confederation, created a few years earlier in 1858 by Mariano Ospina Rodríguez, was defeated in the capital Bogotá, with Mosquera deposing the newly elected president Bartolomé Calvo on July 18, 1861. Forming a provisional government, with himself as president, Mosquera continued to pursue the conservative forces until their final defeat in 1862. The resulting formation of the new United States of Colombia would have significant cultural and economic consequences for Colombia. 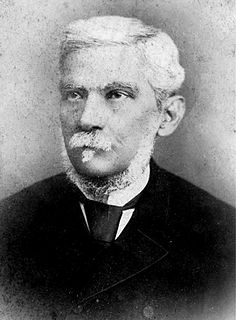 Bartolomé Calvo Díaz de Lamadrid was a Colombian lawyer, journalist, and statesman, who became President of the Granadine Confederation, in what is now Colombia, in 1861 in his role as Inspector General, because no elections were held on that year to decide the presidency. He also served as Governor of Panama and Ambassador to Ecuador, and worked in a number of newspapers. 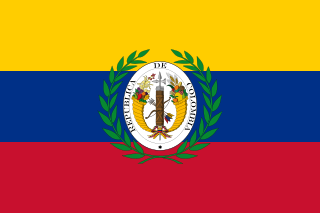 Gran Colombia is the name historians use to refer to the state that encompassed much of northern South America and part of southern Central America from 1819 to 1831. The state included the territories of present-day Colombia, Ecuador, Panama and Venezuela, and parts of northern Peru, western Guyana and northwestern Brazil. The term Gran Colombia is used historiographically to distinguish it from the current Republic of Colombia, which is also the official name of the former state.

José Bonifacio Aquileo Elias Parra y Gómez de la Vega was a Colombian soldier, businessman and political figure. He was the President of Colombia between 1876 and 1878. 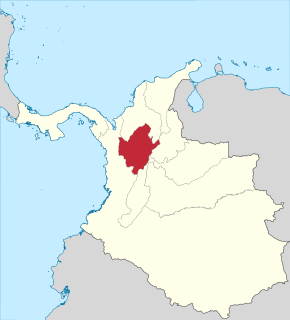 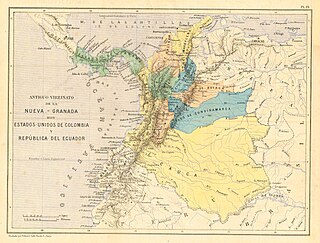 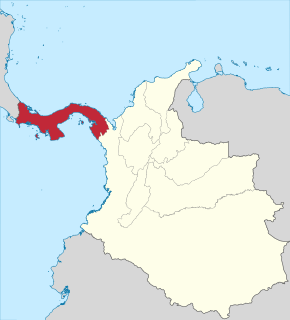 Following independence from Spain in 1821, Panamá State was one of the states of the Republic of Gran Colombia. Created 27 February 1855 under the name Estado Federal de Panamá. It later was recognized as Estado de la Federación in the constitution of the Granadine Confederation of 1858, and in the constitution of 1863 renamed as Estado Soberano in the national and state constitutions of 1863. Since 1903, most of its territory has become the Republic of Panama. 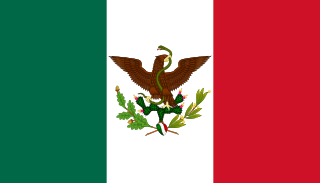