United States v. Morgan is the name of a number of noted court cases:

The Supreme Court of the United States (SCOTUS) is the highest court in the federal judiciary of the United States of America. It has ultimate appellate jurisdiction over all federal and state court cases that involve a point of federal law, and original jurisdiction over a narrow range of cases, specifically "all Cases affecting Ambassadors, other public Ministers and Consuls, and those in which a State shall be Party". The Court holds the power of judicial review, the ability to invalidate a statute for violating a provision of the Constitution. It is also able to strike down presidential directives for violating either the Constitution or statutory law. However, it may act only within the context of a case in an area of law over which it has jurisdiction. The Court may decide cases having political overtones, but it has ruled that it does not have power to decide non-justiciable political questions. 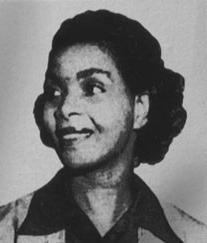 Irene Amos Morgan, later known as Irene Morgan Kirkaldy, was an African-American woman from Baltimore, Maryland, who was arrested in Middlesex County, Virginia, in 1944 under a state law imposing racial segregation in public facilities and transportation. She was traveling on an interstate bus that operated under federal law and regulations. She refused to give up her seat in what the driver said was the "white section". At the time she worked for a defense contractor on the production line for B-26 Marauders. 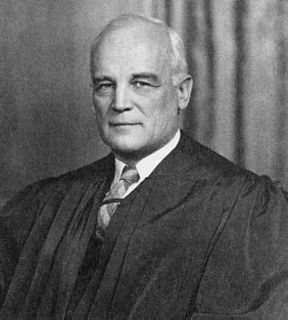 Harold Hitz Burton was an American politician and lawyer. He served as the 45th mayor of Cleveland, Ohio, as a U.S. Senator from Ohio, and as an Associate Justice of the Supreme Court of the United States.

Harlan Fiske Stone was an American lawyer and jurist who served as an Associate Justice of the U.S. Supreme Court from 1925 to 1941 and then as the Chief Justice of the United States from 1941 until his death in 1946. He also served as the U.S. Attorney General from 1924 to 1925 under President Calvin Coolidge, with whom he had attended Amherst College as a young man. His most famous dictum was: "Courts are not the only agency of government that must be assumed to have capacity to govern."

City of Boerne v. Flores, 521 U.S. 507 (1997), was a landmark decision of the US Supreme Court concerning the scope of Congress's power of enforcement under Section 5 of the Fourteenth Amendment. The case also had a significant impact on historic preservation.

Doe v. Bolton, 410 U.S. 179 (1973), was a decision of the United States Supreme Court overturning the abortion law of Georgia. The Supreme Court's decision was released on January 22, 1973, the same day as the decision in the better-known case of Roe v. Wade.

Hernandez v. Texas, 347 U.S. 475 (1954), was a landmark case, "the first and only Mexican-American civil-rights case heard and decided by the United States Supreme Court during the post-World War II period." In a unanimous ruling, the court held that Mexican Americans and all other nationality groups in the United States have equal protection under the 14th Amendment of the U.S. Constitution. The ruling was written by Chief Justice Earl Warren. This was the first case in which Mexican-American lawyers had appeared before the Supreme Court.

Northern Securities Co. v. United States, 193 U.S. 197 (1904), was a case heard by the U.S. Supreme Court in 1903. The Court ruled 5 to 4 against the stockholders of the Great Northern and Northern Pacific railroad companies, who had essentially formed a monopoly, and to dissolve the Northern Securities Company.

The Fifth Amendment to the United States Constitution addresses criminal procedure and other aspects of the Constitution. It was ratified in 1791 along with nine other articles of Bill of Rights. The Fifth Amendment applies to every level of the government, including the federal, state, and local levels, in regard to a US citizen or resident of the US. The Supreme Court furthered the protections of this amendment through the Due Process Clause of the Fourteenth Amendment. 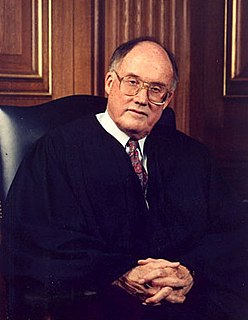 William Hubbs Rehnquist was an American lawyer and jurist who served on the Supreme Court of the United States for 33 years, first as an Associate Justice from 1972 to 1986 and then as Chief Justice from 1986 until his death in 2005. Considered a conservative, Rehnquist favored a conception of federalism that emphasized the Tenth Amendment's reservation of powers to the states. Under this view of federalism, the court, for the first time since the 1930s, struck down an act of Congress as exceeding its power under the Commerce Clause.

Morgan v. U.S. is the name of a number of noted Supreme Court cases:

Ford Motor Co. v. NLRB, 305 U.S. 364 (1939), is an 8-to-0 decision by the Supreme Court of the United States which held that an administrative agency of the United States government, seeking enforcement of its orders, cannot withdraw its petition or the transcript of the administrative hearing once these have been submitted to the appropriate court. Whether the agency should be permitted to withdraw its petition is a decision for the court of appeals, the Supreme Court said.

United States v. Morgan, 346 U.S. 502 (1954), is a landmark decision by the United States Supreme Court which provides the writ of coram nobis as the proper application to request federal post-conviction judicial review for those who have completed the conviction's incarceration.

United States v. Morgan, 313 U.S. 409 (1941), is the fourth and final decision by the United States Supreme Court in a long battle between the Secretary of Agriculture and market agencies on the reasonable rates to be rendered for services. The Court held that, under the Packers and Stockyards Act, the Secretary of Agriculture had the authority and he properly determined the reasonable rates for services rendered by market agencies.