The United World College in Mostar (UWC Mostar)(Bosnian/Croatian/Serbian Latin: Koledž Ujedinjenog svijeta u Mostaru) is a part of the United World College, founded by Elisatheth Rehn (UN Special Rapporteur on the Secretary General for the United Nations Mission in Bosnia-Herzegovina 1995-1999) and Lamija Tanović (Chair, Humanity in Action Bosnia and Herzegovina) in 2006 and officially opened by Queen Noor of Jordan. UWC Mostar is the first UWC with an explicit aim to contribute to the reconstruction of a post-conflict society and also the first to be housed within an existing public school (see also Education in Bosnia and Herzegovina). [1] UWC Mostar is the twelfth college in the United World Colleges family and the fourth college in Europe.

UWC Mostar was founded (key founding members Elisabeth Rehn and Lamija Tanović) as a joint initiative of UWC and the International Baccalaureate Organization with the aim to support the peace process in the country and the region. From January 2011, UWC Mostar is part of Foundation Education in Action which is a legal successor of UWC-IB Initiative in Bosnia and Herzegovina.

UWC Mostar (165-200 students) shares the building with Gimnazija Mostar (approx. 650 students). Before the war this school, also known as the Old Gymnasium, built in 1898 - 1902 during the Austro-Hungarian rule in Bosnia and Herzegovina, was one of the finest schools in ex-Yugoslavia. [2] However, as consequence of the Bosnian War, nowadays Gymnasium Mostar teaches two national separate secondary school curricula, intended for Croat and Bosniak students. [3] UWC Mostar students come from all ethnic groups in Bosnia and Herzegovina as well as from the region and abroad. [4] All students live, study and serve the community together creating a unique example of integrated education in post-war Bosnia and Herzegovina.

The college also serves as the Centre for Professional Development of Teachers in Bosnia and Herzegovina who receive training in international educational standards.

The UWC Mostar is located in Mostar, which is the centre of Herzegovina, an historic region of Bosnia and Herzegovina. Mostar is widely known by the famous Old Bridge ( Stari Most ), originally built in 1566, destroyed by HVO forces during the Bosnian War in 1993 and rebuilt in 2004. Mostar was chosen for hosting UWC as the most striking example of the post-war ethnic division and tensions.

The UWC Mostar is located in the city center.

Unlike most other UWCs, UWC Mostar does not have an isolated campus - students live in three residences in different parts of the City of Mostar.

UWC is a global network of schools and educational programmes with the shared mission of “making education a force to unite people, nations and cultures for peace and a sustainable future”. The organization was founded on the principles of German educationalist Kurt Hahn in 1962 to promote intercultural understanding. Today, UWC consists of 18 schools on four continents. Young people are selected for the IB Diploma Programme from over 155 countries through a system of volunteer-run national committees; some of the schools are also open to younger years. Today, UWC runs the world’s largest scholarship programme in international secondary education, with over 80% of students selected by UWC national committees receiving a scholarship. 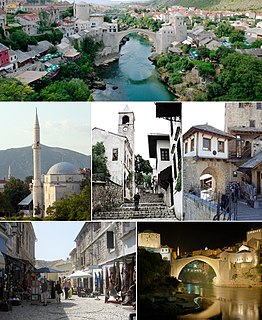 The school UWC Red Cross Nordic, formerly known as Red Cross Nordic United World College, was founded in 1995, located in Norway. It is the ninth member of the today 18 United World Colleges, others having been established in Wales, Canada, Hong Kong, Italy, India, Singapore, Swaziland, United States, Costa Rica, the Netherlands, Bosnia & Herzegovina, Germany, Armenia, China, Thailand, Japan, and Tanzania. Patrons of the college and the movement include Nelson Mandela, Queen Noor of Jordan and Queen Sonja of Norway. The first college, UWC Atlantic College, was established by the German educationalist Kurt Hahn to promote international understanding and peace. Students are selected by UWC National Committees or selection contacts in over 150 countries on merit and many receive full scholarships. After the two-year education following the guidelines of the International Baccalaureate Diploma Program students usually go on to higher education. UWC students are eligible to participate in the Shelby Davis Scholarship program, which funds undergraduate studies for UWC students at many US universities. The school is led by the Rektor, Hege Myhre, Deputy Rektor, Jo Loiterton and the Board of Governors, currently chaired by Christian Democratic Party MP Geir Jørgen Bekkevold.

UWC Mahindra College is a pre-university International Boarding School, located 40km west of Pune in Maharashtra, India. The college is a two-year programme with about 250 full-time boarders, and follows the International Baccalaureate (IB) Diploma Program (DP). It is one of the 18 United World Colleges. The school was established in 1997 by the patron of Mahindra Group, Harish Mahindra; the current chair is Keshub Mahindra.

Märta Elisabeth Rehn is a former MP of the Swedish People's Party and the first female minister of defence in Finland and in Europe becoming the world's first woman defense minister. In the 1994 presidential election, she was narrowly defeated by Martti Ahtisaari.

The International Baccalaureate Diploma Programme (IBDP) is a two-year educational programme primarily aimed at 16-to-19-year-olds in 140 countries around the world. The programme provides an internationally accepted qualification for entry into higher education and is recognized by many universities worldwide. It was developed in the early-to-mid-1960s in Geneva, Switzerland, by a group of international educators. After a six-year pilot programme that ended in 1975, a bilingual diploma was established.

The Group 2: Language acquisition subjects of the IB Diploma Programme consist of the nearly 80 additional languages offered and may be studied at the following levels: B, or ab initio. Latin and Classical Greek are also offered and may be taken at SL or HL. To earn an IB Diploma, a candidate must study an additional language, though a second Language A may be taken instead of studying that language as a Group 2 subject.

The University of Mostar is the largest public university located in Mostar, Bosnia and Herzegovina.

Mostar International Airport is an airport near Mostar, Bosnia and Herzegovina, situated in the village of Ortiješ, 4 NM southeast of Mostar's railway station.

The University of Sarajevo is a public university located in Sarajevo, Bosnia and Herzegovina. It is the largest and oldest university in the country, as well as the oldest institution of tertiary learning in the former Yugoslavia, tracing its initial origins to 1537 as an Islamic madrasa.

St. Gilgen International School (StGIS) co-educational boarding and day school between the ages of 9 and 18. The school offers a primary and middle school curriculum leading to the highly regarded International Baccalaureate Diploma Programme qualification in the final two years. The language of instruction is English.

The United World College Costa Rica, located in the Santa Ana suburb of San José, is the 11th college in the UWC movement and the first to offer instruction in both English and Spanish. The College, formerly the "Colegio Internacional SOS Hermann Gmeiner," opened in August 2006 and graduated its first UWC-admitted applicants in 2008. As of 2016, it contains 172 international students from more than 70 different countries. Students throughout the UWC movement are selected based on an extensive scholarship programme, meaning that they are selected on the basis of merit and regardless of their social or economic status. Given its historic connection with SOS Children's Villages, UWC Costa Rica aims to ensure that students from socio-economically disadvantaged backgrounds are admitted to the school each year. Depending on their academic needs, students may apply for a three-year programme with a preparatory pre-IB year before enrolling in the regular IB Diploma Programme. The College is primarily committed to three areas: Conflict Resolution, the environment and multiculturalism.

Riverside School is an international school in Prague being both independent and non-profit. It is a day school offering students aged 3–18 an international approach to education in the English language that opened in 1994. The curriculum is based on the British National Curriculum and the Senior High offers IGCSE's and the International Baccalaureate (IB) Diploma Programme. The Director is Peter Daish. The school celebrated its 25th year of operation in 2019.

Mont'Kiara International School is an American international school located in Mont Kiara, in the constituency of Segambut, Kuala Lumpur, Malaysia. The first students enrolled in M'KIS in 1994, and its first senior class graduated in 2001. The school offers IB courses and the full IB Diploma Programbut does not offer the AP program. Mont'Kiara International School was authorized as an IB Primary Years Programmes (PYP) school in 2019 and an IB Middle Years Programme (MYP) school in 2020. Located in the suburban Mont Kiara on 6-acre (2.4 ha) of land.

Doha British School (DBS), established and opened in October 1997, is a co-educational comprehensive International school in the Ain Khaled area of Doha, in the State of Qatar. It offers international education to students from pre-school to Year 13. The students are of over 85 nationalities.

Avdo Humo was a Yugoslav and Bosnian communist politician, writer and an Order of the People's Hero recipient.

Mostar Round-Trip is a 2011 Israeli documentary film, a Fisher Features Ltd. release directed and produced by David Fisher. The film follows his son, Yuval and his classmates who are studying in an international high-school, United World College, in Mostar, Bosnia and Herzegovina.The film also exposes the recuperating city, which has been greatly damaged during the Bosnian War and is now geographically divided between the Bosniak and Croat populations. This is the second film in the family trilogy created by Fisher that started with the critically acclaimed Love Inventory (2000) and completed by Six Million and One (2011).

The siege of Mostar was fought during the Bosnian War first in 1992 and then again later in 1993 to 1994. Initially lasting between April 1992 and June 1992, it involved the Croatian Defence Council (HVO) and the Army of the Republic of Bosnia and Herzegovina (ARBiH) fighting against the Serb-dominated Yugoslav People's Army (JNA) after Bosnia and Herzegovina declared its independence from Yugoslavia. That phase ended in June 1992 after the success of Operation Jackal, launched by the Croatian Army (HV) and HVO. As a result of the first siege around 90,000 residents of Mostar fled and numerous religious buildings, cultural institutions, and bridges were damaged or destroyed.

Gimnazija Mostar is a gymnasium in Mostar, Bosnia and Herzegovina. Formerly called Gimnazija "Aleksa Šantić" in honour of the eponymous poet, it is nowadays popularly referred to as Stara gimnazija.