The party was formed on 11 November 1980 by Saadia Marciano. He had been elected to the Knesset on the list of the Left Camp of Israel, a union of various left-wing groups, including Meri, Moked, the Independent Socialist Faction and the Israeli Black Panthers, but broke away soon after taking his seat in 1980 (the Left Camp had two seats which were held in rotation by five party members). On 30 December, the faction was named Equality in Israel – Panthers.

In May 1981 he was joined by Mordechai Elgrably, who had been elected to the Knesset on Dash's list, and had joined the Democratic Movement after the party split, before leaving to sit as an independent MK. A name change resulted in the party becoming known as the Unity Party.

However, the party failed to cross the 1% electoral threshold in the June 1981 elections and subsequently disappeared.

The National Union was an alliance of right-wing and nationalist political parties in Israel. In its final full form, the alliance consisted of four parties: Moledet, Hatikva, Eretz Yisrael Shelanu, and Tkuma. Leading up to the 2013 Knesset elections, only Tkuma remained, and joined The Jewish Home. During its existence, it had also included Ahi, Herut – The National Movement, the Jewish National Front, and Yisrael Beiteinu.

Mapai was a centre-left political party in Israel, and was the dominant force in Israeli politics until its merger into the modern-day Israeli Labor Party in 1968. During Mapai's time in office, a wide range of progressive reforms were carried out, as characterised by the establishment of a welfare state, providing minimum income, security, and free access to housing subsidies and health and social services.

The Israeli Communist Party, commonly referred to by its Hebrew acronym Maki, is a communist political party in Israel and forms part of the political alliance known as Hadash. It was originally known as Rakah, an acronym for Reshima Komunistit Hadasha, and is not the same party as the original Maki, from which it broke away in the 1960s.

Ratz, officially the Movement for Civil Rights and Peace was a left-wing political party in Israel that focused on human rights, civil rights, and women's rights. It was active from 1973 until its formal merger into Meretz in 1997.

The Center Party, originally known as Israel in the Center, was a short-lived political party in Israel. Formed in 1999 by former Defense Minister Yitzhak Mordechai, the aim was to create a group of moderates to challenge Binyamin Netanyahu on the right and opposition leader Ehud Barak's Labor Party on the left.

Meri was a small radical left-wing political party in Israel. It was founded in the 1960s as HaOlam HaZeh – Koah Hadash by Uri Avnery, editor of HaOlam HaZeh.

The Women's Party was a minor political party in Israel. 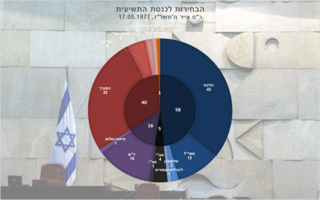 Legislative elections were held in Israel on 17 May 1977 to elect the ninth Knesset. For the first time in Israeli political history, the right-wing, led by Likud, won a plurality of seats, ending almost 30 years of rule by the left-wing Alignment and its predecessor, Mapai. The dramatic shift in Israeli politics caused by the outcome led to it becoming known as "the revolution", a phrase coined by TV anchor Haim Yavin when he announced the election results live on television with the words "Ladies and gentlemen—a revolution!". The election saw the beginning of a period lasting almost two decades where the left- and right-wing blocs held roughly equal numbers of seats in the Knesset.

The Alignment is the name of two political alliances in Israel, both of which ended their existence by merging into the Israeli Labor Party.

Morasha, later known as Morasha-Poalei Agudat Yisrael, was a small, short-lived religious political party in Israel during the 1980s.

The Democratic Choice was a political party in Israel. Between 1999 and 2006, it was the name of a faction led by Roman Bronfman, which was associated with Meretz. In 2020 the party was revived for five days by Yair Golan.

Saadia Marciano was an Israeli social activist and politician, and founder of the Israeli Black Panthers.

Mordechai Elgrably is an Israeli former politician who served as a member of the Knesset for several parties between 1977 and 1981.

The Left Camp of Israel was a left-wing political party in Israel. It was also known as Sheli, an acronym for "Peace for Israel".

The Israeli Labor Party, commonly known as HaAvoda, is a social democratic and Zionist political party in Israel. The party is currently under negotiations with Blue and White to implement a merger. The party was established in 1968 by a merger of Mapai, Ahdut HaAvoda and Rafi. Until 1977, all Israeli Prime Ministers were affiliated with the Labor movement. The current party leader is Amir Peretz.

Mapam was a left-wing political party in Israel. The party is one of the ancestors of the modern-day Meretz party.

Ahdut HaAvoda was the name used by a series of political parties. Ahdut HaAvoda in its first incarnation was led by David Ben-Gurion. It was first established during the period of British Mandate and later became part of the Israeli political establishment. It was one of the forerunners of the modern-day Israeli Labor Party. 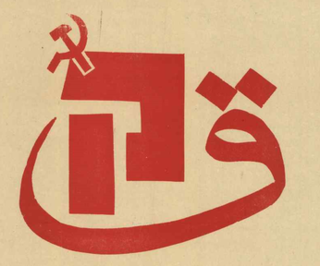 Maki was a communist political party in Israel. It is not the same party as the modern-day Maki, which split from it during the 1960s and later assumed its name.