Universe People or Cosmic People of Light Powers (Czech : Vesmírní lidé sil světla) is a Czech and Slovak UFO religion founded in the 1990s and centered on Ivo A. Benda. [1] Their belief system is based upon the existence of extraterrestrial civilizations communicating with Benda and other contactees since October 1997 telepathically and later even by direct personal contact. They are considered to be the most distinctive UFO religion in the Czech Republic. [2]

Following the mass suicide of the members of the cult Heaven's Gate in 1997, the Universe People attracted the attention of Czech media as a group with similar ideology and potential to commit similar acts. [3] The probability of this development has diminished in later years (2004). On several occasions, the group also managed to appear in the Czech and Slovak mass media.

Ivo A. Benda began his public activities in the middle of the 1990s. He has organized more than 180 lectures, visited by more than 12,000 people (according to his own words). In 1997 he published the book Rozhovory s poučením od mých přátel z vesmíru (Interviews With Instructions From My Friends From the Universe). [4] At the beginning of the 2000s he managed to penetrate the mass media, he appeared in the Nova TV and in the Czech Television (Czech state broadcasting channel). Some of the visitors of his public lectures considered his speeches as a perfect mystification or joke, however, psychiatrists labelled his performances as a bizarre psychotic delusion. [4] From 1998 to 2000, the ideology of the Universe People was close to sectarianism, with a central idea of coming cosmic catastrophe and evacuation of people to another planet. However, their later efforts moved to defence against the attacks of negative extraterrestrial beings, called saurians or lizard people (in Czech: ještírci). [5]

In the second half of the 2000s, Ivo Benda and his group became more publicly known also in Slovakia. In 2007, the Slovak private television channel TV JOJ reported that the Universe People sent instructions on how to defend against attacks of evil extraterrestrial entities to the Slovak Ministry of Defense. The envelopes also contained suspicious material, which alarmed the Slovak Military Police and security services. One of the buildings of the Ministry was evacuated. These envelopes contained instructional CDs and promotional materials of the group. Ivo Benda stated on TV: "If you were attacked by a lizard man from an outer world, the Ministry of Defense should defend the people, shouldn't it? Or do you consider those lizard people as friends?" The suspicion of a security threat was unproven. [6]

According to Benda, extraterrestrial civilizations operate a fleet of spaceships, led by Ashtar Galactic Command, orbiting the Earth. [7] [8] They closely watch and help the good and are waiting to transport their followers into another dimension. The Universe People's teachings incorporate various elements from ufology (some foreign contactees are credited, though often also renounced after a time as misguided or deceptive), Christianity (Jesus was a "fine-vibrations" being) and conspiracy theories (forces of evil are supposed to plan compulsory chipping of the population). [9]

Benda based his philosophy on information from many independent books, including Angels In Starships (Giorgio Dibitonto), Inside The Spaceships (George Adamski), Bringers Of The Dawn (Barbara Marciniak) and others. He also adopted parts of Swiss citizen Billy Meier's philosophy. However, Benda's philosophy is in some points in conflict with Meier's and Meier has declined any contacts with Benda and does not recognize his movement.

Members of the movement distrust modern technologies and control mechanisms of the society. They consider mass media to be a tool of oppression and manipulation. Despite this, Benda often seeks contact with journalists to tell his ideas to the public. They often have problems with copyright infringement, because Benda has declared that the only copyright owners are the Universe creatures, who do not consider it important. The movement also wants to abolish money. [2]

Opponents consider Benda and some more active of his followers to be mentally ill and the Universe People to be a potentially dangerous cult. [4] According to Zdeněk Vojtíšek (from the anticult [2] Society for Studying of Sects and New Religious Movements), the movement represents a possible danger because of its religious background and similar features with Christianity. [10]

In 2000, Benda announced the organization of the 1st World Symposium of Love, held at the Prague Castle under the auspices of the President Václav Havel. Havel's office denied his claims. [11] Benda later stated that three months before the Symposium Havel had said that he would attend, but later changed his mind. [12]

The group's enthusiastic propaganda on the Internet (a large website in garish colours) including spam, the nature of their recorded "messages" as well as attempts to comment on every aspect of life and appropriate any popular notion (life in The Matrix , for example) has built it an Internet cult following who make fun of it and even visit Benda's frequent rambling public lectures. 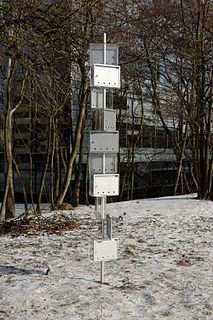 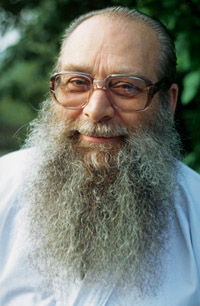 Eduard Albert Meier, commonly nicknamed "Billy", is the founder of a UFO religion called the "Freie Interessengemeinschaft für Grenz- und Geisteswissenschaften und Ufologiestudien" and alleged contactee whose UFO photographs are claimed to show alien spacecraft. Meier claims to be in regular contact with extraterrestrial beings he calls the Plejaren. He also presented other material during the 1970s such as metal samples, sound recordings and film footage. Meier claims to be the seventh reincarnation after six prophets common to Judaism, Christianity, and Islam: Enoch, Elijah, Isaiah, Jeremiah, Immanuel (Jesus), and Mohammed.

Contactees are persons who claim to have experienced contact with extraterrestrials. Some claimed ongoing encounters, while others claimed to have had as few as a single encounter. Evidence is anecdotal in all cases.

A UFO religion is any religion in which the existence of extraterrestrial (ET) entities operating unidentified flying objects (UFOs) is an element of belief. Typically, adherents of such religions believe the ETs to be interested in the welfare of humanity which either already is, or eventually will become, part of a pre-existing ET civilization. Others may incorporate ETs into a more supernatural worldview in which the UFO occupants are more akin to angels than physical aliens; this distinction may be blurred within the overall subculture. These religions have their roots in the tropes of early science fiction and weird fiction writings, in ufology, and in the subculture of UFO sightings and alien abduction stories.

In ufology, Nordic aliens are humanoid extraterrestrials purported to come from the Pleiades who resemble Nordic-Scandinavians. Professed contactees describe them as being six to seven feet tall with long blonde hair, blue eyes, and fair skin. Ufologist George Adamski is credited with being among the first to claim contact with Nordic aliens in the mid 1950s, and scholars note that the mythology of extraterrestrial visitation from beings with features described as Aryan often include claims of telepathy, benevolence, and physical beauty.

Tribute to Václav Havel was an event held in memory of Václav Havel, the last Czechoslovak and the first Czech President, writer, playwright and human rights activist. The concert took place in Lucerna Music Bar in Prague on 23 December 2011, five days after the death of Havel.

STUHA was an alternative, independent student movement in the late phase of the Czechoslovak Communist régime. It was gradually formed by Prague students in the late spring and early summer of 1989. The movement was the catalyst that mobilized the university students, later culminating in the demonstration and march at Albertov, Prague, and then on to the city centre, on 17 November 1989. 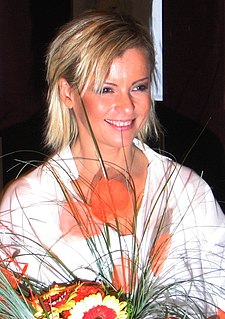 Iveta Bartošová was a Czech singer, actress and celebrity, three-time best female vocalist in the music poll Zlatý slavík. She was also known for her turbulent lifestyle attracting the attention of the Czech tabloid media.

Center for Civil Liberties is a think-tank founded by Václav Klaus Jr. in January 2017, focused on civil liberties, economic issues, and education. Klaus said that his aim is for the institute to compete with the Václav Havel Library.

Jiří Zimola is a Czech Social Democrat politician, who served as Governor of the South Bohemian Region from 2008 until his resignation in 2017. Zimola left the Social Democratic Party in 2020 and became leader of a new party called Change 2020. 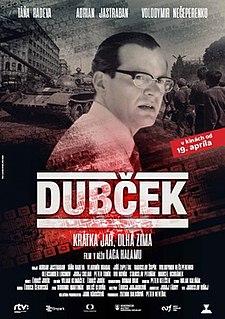 Dubček is a 2018 Slovak historical film based on life of Alexander Dubček, a Slovak politician who served as the First Secretary of the Presidium of the Central Committee of the Communist Party of Czechoslovakia (KSČ) and who attempted to reform the communist government during the Prague Spring but was forced to resign following the Warsaw Pact invasion in August 1968.