Tegucigalpa, colloquially referred to as Téguz, is the capital and largest city of Honduras along with its twin sister, Comayagüela.

San Pedro Sula is the capital of Cortés Department, Honduras. It is located in the northwest corner of the country in the Sula Valley, about 50 kilometres (31 mi) south of Puerto Cortés on the Caribbean Sea. With a census population of 719,063 in 2013, and 1,445,598 people living in its metropolitan area in 2010, it is the nation's primary industrial center and second largest city after the capital Tegucigalpa.

La Ceiba is a port city on the northern coast of Honduras in Central America. It is located on the southern edge of the Caribbean, forming part of the south eastern boundary of the Gulf of Honduras. With an estimated population of over 200,000 living in approximately 170 residential areas, it is the third largest city in the country and the capital of the Honduran department of Atlántida. La Ceiba was officially founded on 23 August 1877. The city was named after a giant ceiba tree which grew near the old dock. The dock itself finally fell into the sea in late 2007. The city has been officially proclaimed the "Eco-Tourism Capital of Honduras" as well as the "Entertainment Capital of Honduras". Every year, on the third or fourth Saturday of May, the city holds its famous carnival to commemorate Isidore the Laborer. During this time, the city is host to approximately 500,000 tourists. 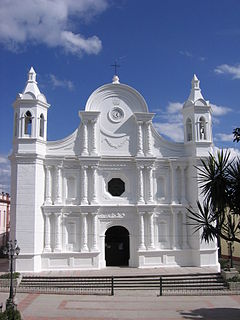 Santa Rosa de Copán is the departmental capital of the Honduran department of Copán. It is approximately 1,150 metres (3,773 ft) above mean sea level.

Siguatepeque is a town and municipality in the Honduran department of Comayagua.

San José de Colinas is a town and municipality in the Honduran department of Santa Bárbara.

Estadio San Carlos de Apoquindo is a football stadium, in Las Condes in the metropolitan region of Santiago de Chile. It is used mostly for home matches stadium of the Chilean top club CD Universidad Católica which also owns the stadium. The stadium was built in 1988 and currently holds 14,118 people.

The Pontifical Catholic University of Puerto Rico is a Roman Catholic university located in Ponce, Puerto Rico. It provides courses leading to Bachelor's, Master's and Doctorate degrees in the areas of education, business administration, science, and arts and human studies. The University is also home to a Law School, and in August 2010 it inaugurated a School of Architecture in downtown Ponce. The university's original name was changed in 1950 to Catholic University of Puerto Rico with the graduation of its first class. On 25 January 1991, the name was again changed to its current name, after Pope John Paul II bestowed the title of pontifical. 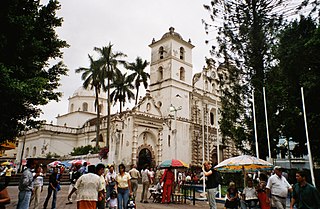 The Roman Catholic Archdiocese of Tegucigalpa is the only Metropolitan see in Honduras, whose ecclesiastical province covers the whole country.

The Universidad Nacional de Asunción or Mbo'ehaovusu Tetãgua Paraguaygua, abbreviated UNA, anglicized as, The National University of Asuncion, is a public university in Paraguay. Founded in 1889, it is the oldest and most traditional university in the country.

The Roman Catholic Diocese of Florencia is a diocese located in the city of Florencia, Caquetá in the ecclesiastical province of Ibagué in Colombia. 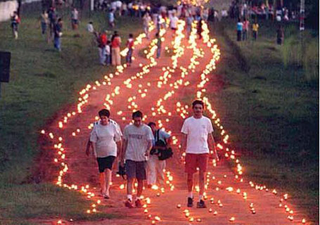 San Ignacio, also known as San Ignacio Guazú, is a city and district in the Misiones Department of Paraguay, located 225 kilometres (140 mi) from Asunción.

Universidad Tecnológica de Honduras known by its acronym UTH, is a private university located in Honduras. It is known for its careers in Business Management, Law, Marketing and Tourism, and several engineering careers such as Industrial Production engineering, Computer Engineering and Electronics.

Universidad may refer to: