UCO may refer to:

The Pontifical Catholic University of Puerto Rico is a Roman Catholic university with its main campus in Ponce, Puerto Rico. It provides courses leading to Bachelor's, Master's and Doctorate degrees in education, business administration, the sciences, and arts and humanities. It also has campuses in Arecibo and Mayagüez, as well as a satellite extension in Coamo. It is also home to a Law School and a School of Architecture. The university also founded a medical school, Escuela de Medicina de Ponce, in 1977, but in 1980 became an independent entity that eventually became the Ponce Health Sciences University.

The División Mayor del Básquetbol de Chile, DIMAYOR, was one of the national professional basketball leagues in Chile, along with the Liga Nacional Movistar. The league was created in 1979 and was discontinued in 2013.

Antiguo Oriente is an annual peer-reviewed academic journal published by the Center of Studies of Ancient Near Eastern History (CEHAO). It is one of the few scholarly journals in the Spanish-speaking world that focus on the ancient Near East.

Ricardo Gabriel Lunari Del Federico is an Argentine football manager and former player. He is currently in charge of Colón FC.

Gerardo Manuel Reinoso Torres is a former Argentine professional footballer who played for the Argentina national team. After retiring as a player he turned to management and currently works as the coach of Deportes Valdivia in Chile. 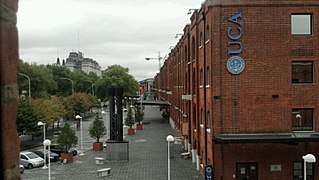 The Center of Studies of Ancient Near Eastern History is a university-based research institution of the Pontifical Catholic University of Argentina, Buenos Aires, Argentina, focused on the history and archaeology of the Ancient Near East. The CEHAO has many periodical publications. The center's flagship is Antiguo Oriente, an annual peer-reviewed journal. CEHAO also publishes, jointly with the Society of Biblical Literature, the open-access peer-reviewed Ancient Near East Monographs (ANEM). Finally, Damqatum, an annual journal aimed at the general public with publications of preliminary high-impact research results.

The 1998 Campeonato Nacional, known as Campeonato Nacional Copa Banco del Estado 1998 for sponsorship purposes, was the 67th season of top-flight football in Chile. Colo-Colo won their 22nd title following a 2–1 home win against Deportes Iquique on 13 December. Universidad Católica also qualified for the next Copa Libertadores as Liguilla winners.

The 1996 Campeonato Nacional, known as Campeonato Nacional Copa Banco del Estado 1996 for sponsorship purposes, was the 64th season of top-flight football in Chile. Colo-Colo won their 20th title following a 1–1 home draw against Audax Italiano on 11 November. Universidad Católica also qualified for the next Copa Libertadores as Liguilla winners.

The Campeonato Nacional Copa Banco del Estado 1994, was the 62nd season of top-flight football in Chile. Universidad de Chile won their eight title following a 1–1 away tie at Cobresal on 18 December. Universidad Católica also qualified for the next Copa Libertadores as Liguilla winners.

Jorge Gabriel Vázquez is an Argentine former footballer and manager who played for clubs in Argentina, Chile, Mexico, Bolivia, Ecuador and United States. He played as a midfielder.

The 2015 Campeonato Nacional Apertura Scotiabank was the 97th Chilean League top flight, in which Colo-Colo won its 31st league title.

Damqatum is an annual academic journal published by the Center of Studies of Ancient Near Eastern History (CEHAO). dedicated to the history and archaeology of the Near East, from the Palaeolithic to the Ottoman period. The journal publishes articles for the general public, interviews with prominent researchers as well as news about academic activities.