The University of Ribeirão Preto (UNAERP) is one of the largest higher education and technology centers in the state of São Paulo. [1] It is a private, maintained by student fees, entering this through vestibular and the AERP (Ribeirão Preto Teaching Association). Its two campuses are divided into two cities one in Ribeirão Preto and one in Guaruja.

The University of Ribeirão Preto was the first institution of higher education in the region of Ribeirão Preto. Founded in 1 June 1924 as "Society School Pharmácia and Ribeirão Preto Dental School" by a group of idealistic health professionals, intellectuals and educators. [1] The establishment of the university was intended to promote the social, educational and cultural development of the area.

In the 1920s, Ribeirão Preto presented itself as one of the most prosperous areas in the state of São Paulo. The wealth generated by the production of coffee led to the region attracting migrants from various parts of the country and immigrants from abroad, with high numbers of Italian people moving to the area. [1]

It was against this background in 1928 that the Ribeirão Preto Education Association (AERP) was founded. Today the AERP maintains the UNAERP and has consolidated it in to an institution with strong academic tradition and one of the most prestigious universities in South America. [1]

In 1959, Professor Electro Bonini (1913–2011) took over the administration of the AERP. During this period the university underwent a large expansion and implemented new courses. In 1961, the Faculty of Law, Laudo de Camargo, was established as well as courses in Social Services, Industrial Chemistry and Business Administration. In the 70s, the AERP also offered the Social Communication courses, Physical Education, Chemical Engineering, Fine Arts, Arts Education, Music alongside other degree choices. As the courses offered by the university grew, the university campus itself needed to expand in order to accommodate the wide range of subjects taught. A new campus was opened in 1971 in the Ribeirânia neighborhood of the city. The new campus encompassed an area of 120 thousand square meters. Alongside the expansion of the campus, the university added more courses for study. [1]

In 1985, the university was officially named as the University of Ribeirão Preto. At the same time Professor Elmara Lucia de Oliveira Bonini took over as dean of the university. Following the appointment of Bonini as dean, the University invested in research in the areas of speech therapy, computer engineering, tourism, nursing, and human, social, health, environmental and biotechnology. These investments continued to grow into the following decade and UNAERP again expanded its range of courses, while fostering the research projects and services for the population. In 1999 the campus in Guaruja was established in the coastal city of São Paulo. The campus was opened in June of that year and adhered to the same philosophy of integrating to the social and regional economic demands. [1]

Today, the UNAERP is one of the largest educational centers in the state of São Paulo and boasts undergraduate and postgraduate courses in technology, health, and sciences. The university continues to maintain its relationship with the surrounding community and conducts regular visits to the community throughout the year. UNAERP also conducts 30 extension programs in clinics, laboratories, and in hospitals.

Ribeirão Preto is a municipality and a metropolitan area located in the northeastern region of São Paulo state, Brazil. 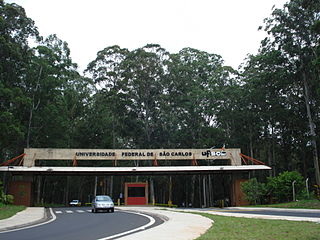 The Federal University of São Carlos is a public research university located in São Carlos, state of São Paulo, Brazil.

Antonio Palocci Filho is a Brazilian physician and politician, and formerly Chief of Staff of Brazil under President Dilma Rousseff. He was the finance minister of the Brazilian federal government from 1 January 2003 to 27 March 2006, when he resigned in the wake of reports of conduct unbecoming of his office during the presidency of Luiz Inácio Lula da Silva. He resigned as Chief of Staff on 7 June 2011.

Zeferino Vaz led the construction, establishment and development of the Unicamp university, in the interior of the State of São Paulo, Brazil in the 1960s and 1970s. The main campus is named after Zeferino, who strived to bring together some of Brazil's best scientists to form a recognised research institution. 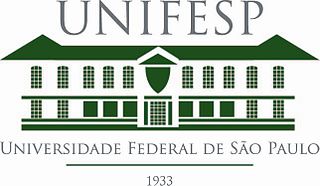 Lucien Alphonse Joseph Lison (1908–1984) was a Belgian/Brazilian physician and biomedical scientist, considered the "father of histochemistry".

Ibmec, is a private research university with four campus in Brazil's main cities of Rio de Janeiro, São Paulo, Belo Horizonte and Brasília. Founded in 1970, it is one of Latin America's most prestigious business and economics school, and today offers undergraduate and graduate programs in several other disciplines.

The Universidade Feevale (Feevale) is a Brazilian university in the city of Novo Hamburgo in the metropolitan region of Porto Alegre, Rio Grande do Sul. The selection process is through entrance exam and continuous assessment.

The University of the State of Paraná is an institution of higher education administered by the Government of the state of Paraná, with a headquartered in the city of Paranavaí, It has campuses in the cities of Curitiba, Apucarana, Campo Mourão, Paranaguá, Paranavaí, São José dos Pinhais and União da Vitória, created by State Law nº 13.283, on October 25, 2001, changed by State law nº 13.358 on December 21, 2001, State Law nº 15.300 on September 28, 2006 and by State Law nº 17.590 on June 12, 2013. It is affiliated with the Science, Technology and Higher Education's Secretary of State.

The Museu de Arte de Ribeirão Preto "Pedro Manuel-Gismondi" is an art museum in the city of Ribeirão Preto in the state of São Paulo, Brazil. Opened in 1992, with the aim of bringing together the art collection belonging to the city, the museum is a local public institution, subordinated to the Municipal Secretary of Culture. Since its founding, the museum is housed in the former Recreation Society building, opened in 1908, who has also served as headquarters to the City of Ribeirão Preto.

Centro Universitário das Faculdades Metropolitanas Unidas is a Brazilian institution of higher education located in the city of São Paulo. The university is better known by the acronym FMU, which is maintained for the sake of tradition, since it has been popularly called FMU since its founding.