Universitetskaya Embankment (Russian : Университетская набережная) is a 1.2 km long embankment on the right bank of the Bolshaya Neva, on Vasilievsky Island in Saint Petersburg, Russia. Starting at the Spit of Vasilievsky Island, it spans between Palace Bridge and Blagoveshchensky Bridge.

The bank was lined with granite in 1805-1810 (eastern part), 1831-1834 (western part) and the 1850s (near Blagoveshchensky Bridge). It features an ensemble of Petrine Baroque buildings of the early 18th century, including the Kunstkamera, Twelve Collegia, Menshikov Palace, as well as the neoclassical building of the Academy of Arts.

The embankment was formerly connected to the left bank through Isaakiyevsky Pontone Bridge, constructed in 1819-1841 in front of Senate Square.

The embankment was named after the university in 1887.

A quay in front of the Imperial Academy of Arts building, adorned with two authentic sphinxes of Pharaoh Amenhotep III brought in 1832 from Thebes, Egypt, was designed by Konstantin Thon and built in 1832–1834.

The Kunstkamera is the first museum in Russia. Established by Peter the Great and completed in 1727, the Kunstkammer Building hosts the Peter the Great Museum of Anthropology and Ethnography, with a collection of almost 2,000,000 items. It is located on the Universitetskaya Embankment in Saint Petersburg, facing the Winter Palace. 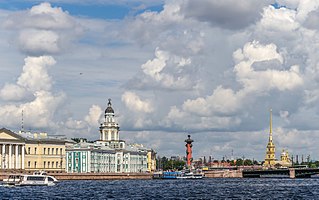 Vasilyevsky Island is an island in St. Petersburg, Russia, bordered by the Bolshaya Neva and Malaya Neva Rivers in the south and northeast, and by the Gulf of Finland in the west. Vasilyevsky Island is separated from Dekabristov Island by the Smolenka River. Together they form the territory of Vasileostrovsky District, an administrative division of Saint Petersburg.

Palace Bridge, a road- and foot-traffic bascule bridge, spans the Neva River in Saint Petersburg between Palace Square and Vasilievsky Island. Like every other Neva bridge, it is drawn by night, making foot travel between various parts of the city virtually impossible. It was built by the French firm Société de Construction des Batignolles between 1912 and 1916. 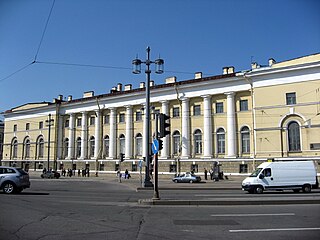 The Zoological Museum of the Zoological Institute of the Russian Academy of Sciences is a Russian museum devoted to zoology. It is located in Saint Petersburg, on Universitetskaya Embankment. It is one of the ten largest nature history museums in the world. 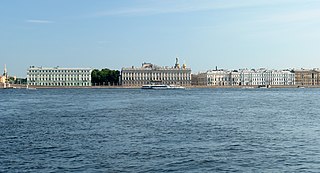 The Palace Embankment or Palace Quay is a street along the Neva River in Central Saint Petersburg which contains the complex of the Hermitage Museum buildings, the Hermitage Theatre, the New Michael Palace, the Saltykov Mansion and the Summer Garden.

The English Embankment or English Quay is a street along the left bank of the Bolshaya Neva River in Central Saint Petersburg. It has been historically one of the most fashionable streets in Saint Petersburg, and in the 19th century was called by the French term, Promenade des Anglais. It was from the English Embankment that at 2 AM on October 25, 1917, the gunshot from the Aurora sent the signal to storm the Winter Palace during Russian Revolution.

The Great Neva or Bolshaya Neva is the largest armlet of the river Neva. It starts near the Spit of Vasilievsky Island . The Great Neva is 3.5 kilometres (2.2 mi) long; the width is from 200 to 400 metres and the depth up to 12.8 metres (42 ft). Its tributaries are Fontanka, Moyka and Novo-Admiralteysky Canal. There are two bridges across Great Neva: Palace Bridge and Blagoveshchensky Bridge.

Tuchkov Bridge is a bascule bridge across Little Neva in Saint Petersburg, Russia. Its length is 226 meters and its width is 36 meters. Tuchkov bridge connects Vasilievsky Island and Petrogradsky Island.

The Twelve Collegia, or Twelve Colleges, is the largest edifice from the Petrine era remaining in Saint Petersburg. It was designed by Domenico Trezzini and Theodor Schwertfeger and built from 1722 to 1744.

The Egyptian Collection of the Hermitage Museum dates back to 1852 and includes items from the Predynastic Period to the 12th century AD. It belongs to the Oriental Art section of the museum. The Egyptian exposition is hosted in a single large hall on the ground floor on the eastern side of the Winter Palace. The hall serves as a passage to the exhibition of Classical Antiquities in other Hermitage buildings and is situated right under St. George's Hall. It was redesigned for the exhibition by Alexander Sivkov in 1940 and earlier served as the main buffet of the Winter Palace. 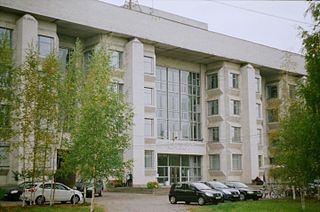 The Faculty of Chemistry at Saint Petersburg State University is one of the leading chemistry faculties in Russia.

Quay with Sphinxes is a quay at the Universitetskaya Embankment in Saint Petersburg, in front of the Imperial Academy of Arts. It is remarkable for the two ancient sphinxes that were brought from Egypt to Russia at the height of Egyptomania in 1832. The quay was completed in 1834. 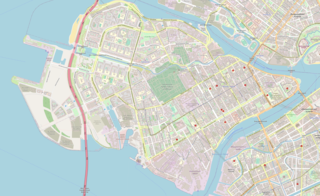 The following is a timeline of the history of the city of Saint Petersburg, Russia.

The Neva embankment refer to various embankments along the Neva River in Saint Petersburg, Russia: 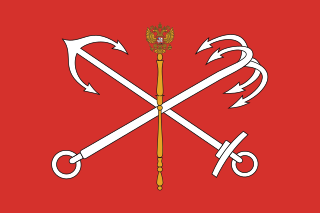 The following outline is provided as an overview of and topical guide to Saint Petersburg: