The University Bible Fellowship (UBF; Korean: 대학생성경읽기선교회) is an international evangelical non-denominational Christian entity that originated in South Korea in 1961. [1] It was founded through a partnership between a Korean, Samuel Chang-Woo Lee, and Sarah Barry, an American Presbyterian missionary who was sent to South Korea. The international headquarters of UBF is in Chicago. The group members are concentrated in South Korea, but has chapters in 91 countries including American universities and community colleges. [2] The organization's stated goal is student evangelism. [3]

UBF began in South Korea as a student movement built around one-on-one teaching sessions for college students using the Bible and instilling the founders' version of Shepherding Movement teachings. [4] In 1964, UBF began expanding its campus presence through missionary work in South Korea. In 1966, the group established their headquarters in Seoul. In the 1970s, UBF began expanding to North America and is mentioned in the group of campus ministries who actively engaged in student recruitment to create Bible-based societies. [5] In 1975, the organization became incorporated as a non-profit organization in the United States, in the state of Mississippi. [6] Soon after the incorporation, the organization's international headquarters was relocated from Seoul to Chicago. They continued to establish chapters on college campuses in Africa, Europe, South America, Asia, Oceania, and North America. In 2020, Wheaton College (Illinois) partnered with the Chicago chapter of the group to provide a cross-cultural ministry certification. [7]

Reactions to the group’s recruitment efforts on college campuses have been a mixed bag. Some regard the group as a self-supporting missionary model. [8] Others have, at times, limited or banned the group from practicing their on-campus recruiting efforts, such as at University of Winnipeg (1989), [9] [10] University of Manitoba (1991), [11] [12] [13] and University of Illinois (1993) [14] [15] The group has been documented by various religious watchdog organizations, such as the New England Institute of Religious Research, [16] the Freedom of Mind Resource Center, [17] and the Evangelical Center for World Survey. [18] Some consider the group to be a hyper-evangelical Christian movement contributing to the restoration of Christianity in the United States and other countries. [19] Other observers and former members describe the group as cult-like, excessively controlling, spiritually damaging, or abusive. [20] [17] [16] [21]

The Christian countercult movement or the Christian anti-cult movement is a social movement among certain Protestant evangelical and fundamentalist and other Christian ministries and individual activists who oppose religious sects that they consider cults.

Cru is an interdenominational Christian parachurch organization. It was founded in 1951 at the University of California, Los Angeles by Bill Bright and Vonette Zachary Bright. Since then, Cru has expanded its focus to include adult professionals, athletes, and high school students. In 2020, Cru had 19,000 staff members in 190 countries.

The International Fellowship of Evangelical Students (IFES) is an association of 170 evangelical Christian student movements worldwide, encouraging evangelism, discipleship and mission among students. The headquarters is in Oxford, England.

InterVarsity Christian Fellowship/USA is an inter-denominational, evangelical Christian campus ministry founded in 1941, working with students and faculty on U.S. college and university campuses. InterVarsity is a charter member of the International Fellowship of Evangelical Students, a network of similar campus ministries around the world. 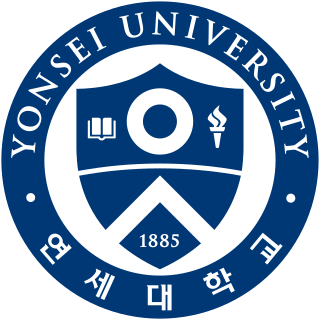 Yonsei University is a private research university in Seoul, South Korea. As a member of the “SKY” universities, Yonsei University is deemed as one of the three most prestigious institutions in the country. It is particularly respected in the studies of medicine and business administration.

Universities and Colleges Christian Fellowship (UCCF) is a UK-based charity that was founded in 1928 as the Inter-Varsity Fellowship of Evangelical Unions. UCCF's dual aims are:

Youth with a Mission is a charasmatic word of faith international Christian missionary and outreach group.

The Christian Research Institute (CRI) is an evangelical Christian apologetics ministry. It was established in October 1960 in the state of New Jersey by Walter Martin (1928–1989). In 1974 Martin relocated the ministry to San Juan Capistrano, California. The ministry's office was relocated in the 1990s near Rancho Santa Margarita. In 2005 the organization moved to its present location in Charlotte, North Carolina.

The Fellowship of Catholic University Students (FOCUS) is a Catholic outreach program for American college students founded in 1997 by Curtis Martin and Dr. Edward Sri at Benedictine College.

The Student Volunteer Movement for Foreign Missions was an organization founded in 1886 that sought to recruit college and university students in the United States for missionary service abroad. It also sought to publicize and encourage the missionary enterprise in general. Arthur Tappan Pierson was the primary early leader.

Tertiary Students Christian Fellowship is a New Zealand evangelical Christian student movement with affiliate groups on most university campuses, as well as some polytechnics and other tertiary institutions. It is a founding member of the International Fellowship of Evangelical Students. With a firm commitment to evangelism and mission, the four principles which guide the TSCF ethos are undivided life, deep thought, global reach and true witness. TSCF partners with approximately 2000 supporters, 1000 students and 27 staff members.