The UKE has 1,460 beds and 121 day-care places and is listed to provide the capacity to dispatch emergency medical services. [1]

The first parts of the hospital were built between 1884 and 1889. From 1913 until 1926, Fritz Schumacher built a general purpose building, today called Fritz-Schumacher-Haus, among others for the pathological anatomy with a dissecting room. In 2008 the hospital participated in the Tag des offenen Denkmals (Day of the open heritage site)—a Germany-wide annual event sponsored by the Deutsche Stiftung Denkmalschutz, that opens cultural heritage sites to the public—showing the Fritz-Schumacher-Haus and the operating theatre in a bunker from Second World War. [2]

The hospital is located in Eppendorf, Hamburg, between Martinistraße and Geschwister-Scholl-Straße, and between the ground of SC Victoria in Hoheluft and the Krankenhaus Bethanien, a hospital which was built in 1893. [4]

The board consists of Burkhard Göke, Medical Director and acting CEO, Rainer Schoppik, Financial Director, Joachim Prölß, Director of patients and care management and the Dean of the Faculty of Medicine Uwe Koch-Gromus. 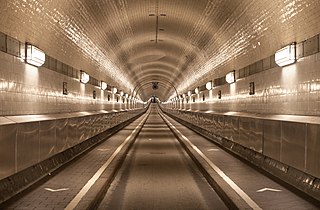 Old Elbe Tunnel or St. Pauli Elbe Tunnel which opened in 1911, is a pedestrian and vehicle tunnel in Hamburg, Germany. The 426 m (1,398 ft) long tunnel was a technical sensation; 24 m (80 ft) beneath the surface, two 6 m (20 ft) diameter tubes connect central Hamburg with the docks and shipyards on the south side of the river Elbe. This was a big improvement for tens of thousands of workers in one of the busiest harbors in the world.

Fritz Schumacher was a German architect and urban designer.

European Heritage Days (EHD) is a joint action of the Council of Europe and the European Commission involving all 50 signatory states of the European Cultural Convention under the motto, Europe: a common heritage. The annual programme offers opportunities to visit buildings, monuments and sites, many of which are not normally accessible to the public. It aims to widen access and foster care for architectural and environmental heritage. These events are also known as Doors Open Days and Open Doors Days in English-speaking countries. 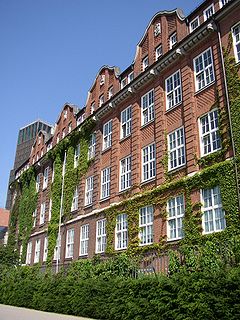 Bernhard Nocht Institute for Tropical Medicine; (BNITM) in Hamburg is Germany's largest institution for tropical medicine in Germany with a workforce of about 250 people in Hamburg. It is member of the Leibniz-Association.

Hamburg-Nord is one of the seven boroughs of the Free and Hanseatic City of Hamburg, in northern Germany. In 2016, according to the residents registration office, the population was 306,732 in an area of 57.5 km2.

The Internationales Maritimes Museum Hamburg is a private museum in the HafenCity quarter of Hamburg, Germany. The museum houses Peter Tamm's collection of model ships, construction plans, uniforms, and maritime art, amounting to over 40,000 items and more than one million photographs. It opened in a former warehouse in 2008.

The Inselspital, also named the University Hospital of Bern, located in Bern, is one of the five university hospitals of Switzerland. It is associated with the University of Bern.

Jenisch House (Jenisch-Haus) is a country house in Hamburg built in the 19th century and an example of Hanseatic lifestyle and neoclassical architecture. As of 2008, Jenisch House is the home of the Museum für Kunst und Kultur an der Elbe. It is located within the Jenisch park in the Othmarschen quarter.

EppendorfGerman pronunciation (help·info) is one of thirteen quarters in the Hamburg-Nord borough of Hamburg, Germany, and lies north of the Außenalster. In 2016 the population was 24,387. 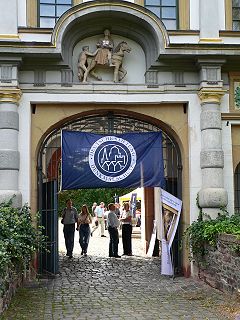 Beschermd erfgoed is the official term to describe Flemish National Heritage Sites listed by law to protect and spread awareness of Belgian cultural heritage, specifically in Flanders. The term is also used nationwide to refer to national heritage sites. Because Belgium is officially a tri-lingual country, the other nationwide terms used in the rest of the country are the French term Bien classé and the German term Kulturdenkmal.

Kulturdenkmal is the official term to describe National Heritage Sites listed by law in German-speaking areas of Europe, to protect and spread awareness of cultural heritage.

Philip Augustine, an Indian gastroenterologist, specialist in gastrointestinal endoscopy and a hospital administrator from Ernakulam, Kerala. He founded the Lakeshore Hospital and Research Centre in 2003, one of the largest multispeciality hospitals in south India. The Government of India honoured him with the civilian award, Padma Shri, in 2010, for his services to the fields of medicine.

The Warburg Haus, Hamburg is a German interdisciplinary forum for art history and cultural sciences and primarily for political iconography. It is dedicated to the life and work of Aby Warburg and run by the University of Hamburg as a semi-independent seminar. "It issues a series of art historical publications directly modeled on the original institution's studies and lectures, and is a sponsor of the reprinted 'Study Edition' released through the Akademie Verlag in Berlin."

Tobias Huber is a German nephrologist and internist. He is university professor and Director and Chairman of the III. Department of Medicine at the University Medical Center Hamburg-Eppendorf.

This is a timeline of healthcare in Germany, focusing on modern healthcare system first adopted in this country. Major events such as policies and organizations are included.

The Kontorhaus District is the southeastern part of Altstadt, Hamburg, between Steinstraße, Meßberg, Klosterwall and Brandstwiete. The streetscape is characterised by large office buildings in the style of brick expressionism of the early 20th century.