University Stadium, also known as Knight–Newbrough Field and formerly known as Seagram Stadium, is a football stadium in Waterloo, Ontario with a capacity of 6,000. It is home to the Wilfrid Laurier Golden Hawks football, rugby, and lacrosse teams. It also served for several years as the home field of soccer side K–W United FC which ceased operations in 2018. [1] Facilities include space for recreational programs and Kinesiology classrooms; there is also a large gym and the football field. [2] The stadium is closed to the public.

Seagram Stadium was built for the University of Waterloo in 1957 with a $250,000 donation from Joseph E. Seagram and Sons Ltd. and additional contributions from Ontario Hydro and the City of Waterloo. It formally opened on May 7, 1958. The Waterloo College Mules played the first football game on October 5 of that year. [5]

In 2007, the stadium underwent a major $5-million renovation which changed the layout; that included replacing the field's playing surface with Fieldturf, overhauling the bleachers, rearranging existing rooms and expansion of the entrance, concession areas and washrooms. The football field was then renamed Knight–Newbrough Field (although the name of the field itself has changed, the stadium as a whole retains the name University Stadium.) [2]

University Stadium is located near Waterloo Park on Seagram Drive.

Waterloo is a city in the Canadian province of Ontario. It is one of three cities in the Regional Municipality of Waterloo. Waterloo is situated approximately 94 km (58 mi) south west of Toronto. Due to the close proximity of the city of Kitchener to Waterloo, the two together are often referred to as "Kitchener–Waterloo" or the "Twin Cities". 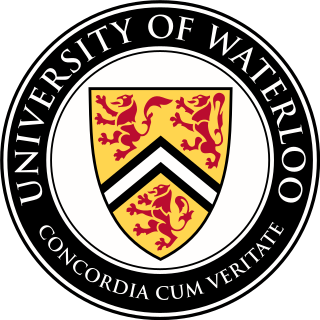 The University of Waterloo is a public research university with a main campus in Waterloo, Ontario, Canada. The main campus is on 404 hectares of land adjacent to "Uptown" Waterloo and Waterloo Park. The university also operates three satellite campuses and four affiliated university colleges. The university offers academic programs administered by six faculties and thirteen faculty-based schools. Waterloo operates the largest post-secondary co-operative education program in the world, with over 20,000 undergraduate students enrolled in the university's co-op program. Waterloo is a member of the U15, a group of research-intensive universities in Canada.

The community of St. Jacobs is located in southwest Ontario, just north of Waterloo in Woolwich Township, Waterloo Region. It is a popular location for tourism, due to its quaint village appearance, retail focus and Mennonite heritage. Waterloo Region is still home to the largest population of Old Order Mennonites in Canada, particularly in the areas around St Jacobs and Elmira. They are often seen on the local roads using their traditional horse and buggy transportation; many also use horses to pull the implements in their farm fields. U Sports women's ice hockey is the highest level of play at the university level under the auspices of U Sports, Canada's governing body for university sports. Women's ice hockey has been played in U Sports since the 1997-98 season, when the governing body was known as the Canadian Interuniversity Athletics Union, following a long stint of teams only competing in the OUA. There are 36 teams, all of which are based in Canada, that are divided into four conferences that are eligible to compete for the year-end championship. As these players compete at the university level, they are obligated to follow the rule of standard eligibility of five years. This competition is considered as the second level in the pyramid of Canadian women's hockey, below the Canadian Women's Hockey League (CWHL).

The Yates Cup is a Canadian sports trophy, presented annually to the winner of the Ontario University Athletics football conference of U Sports. It is the oldest still-existing football trophy in North America, dating back to 1898 and surpassing both the Grey Cup and the Little Brown Jug in longevity.

The Waterloo Memorial Recreation Complex is a recreation facility in Waterloo, Ontario, Canada. It is located on Father David Bauer Drive, west of Uptown. The complex contains the Sunlife Arena, a 4,132-seat multi-purpose arena that is home to the Waterloo Siskins and the Wilfrid Laurier Golden Hawks hockey teams, the Kitchener-Waterloo Kodiaks Major Series Lacrosse team, and the Swimplex, a 30m pool that was the city's first municipally-owned indoor pool.

Wilfrid Laurier University is a public university in Waterloo, Ontario, Canada. Laurier has a second campus in Brantford, Ontario, and recently has opened a third campus in Milton, Ontario as well as offices in Kitchener, Toronto, Yellowknife, and Chongqing, China. It is named in honour of Sir Wilfrid Laurier, the seventh Prime Minister of Canada. The university offers undergraduate and graduate programs in a variety of fields, with over 15,000 full-time undergraduate students, over 1000 full‑time grad students and nearly 4,000 part-time students as of Fall 2019. Laurier's varsity teams, known as the Wilfrid Laurier Golden Hawks, compete in the West Conference of the Ontario University Athletics, affiliated to the U Sports.

David "Tuffy" Knight is a former coach of Canadian university football and a member of the Canadian Football Hall of Fame.

Warrior Field is a sports stadium in Waterloo, Ontario with a capacity of 5,400. It is home to the Waterloo Warriors football, soccer, and field hockey teams while also being available for the school's club teams as well. Warrior Field was built in time for the 2009 season and was renovated further in 2010 with the addition of grandstand seating and area development. Previously, teams played at University Stadium, which is now occupied by Wilfrid Laurier University athletics.

Jesse Alexander is a former Canadian football linebacker who played for the Toronto Argonauts of the Canadian Football League. He played college football for the Wilfrid Laurier Golden Hawks. In 2004, he was named a second-year CIS all-star. The following year, Alexander helped the Golden Hawks win their second Vanier Cup.

Richard Frederick Krell is a Canadian curler from Kitchener, Ontario. 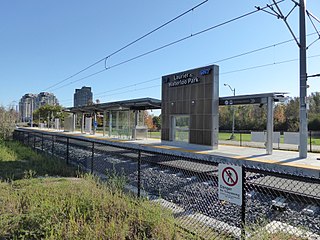 Laurier–Waterloo Park is a stop on the Region of Waterloo's Ion rapid transit system. It is located on Seagram Drive at the Waterloo Spur rail corridor, just inside Waterloo Park. It is the closest station to its namesake, Wilfrid Laurier University, whose main campus is about 500 metres (1,600 ft) east of the station. 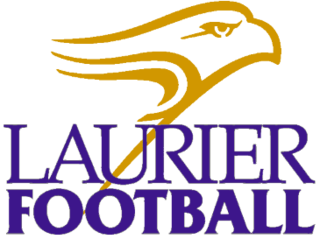 John Willsey is a Canadian curler from Orillia, Ontario. He currently skips a team on the World Curling Tour.