Reflecting the country's low Internet penetration rates, the primary method of communication between the students and faculty is still by regular mail. Lectures for popular majors like economics and sciences are regularly broadcast over the country's Intranet available in over 700 e-Learning Centers throughout the country. [3]

The University of Distance Education was established in July 1992, with Yangon and Mandalay as the hubs in Lower and Upper Myanmar, respectively. The UDE has 32 campuses throughout the country. [3] The UDE's popularity has consistently increased. The enrollment in the university increased from over 38,000 in academic year 1987-88 to over 560,000 students in 2001–02. [2]

The university maintains branches in the following cities. [3]

Sagaing Region is an administrative region of Myanmar, located in the north-western part of the country between latitude 21° 30' north and longitude 94° 97' east. It is bordered by India’s Nagaland, Manipur, and Arunachal Pradesh States to the north, Kachin State, Shan State, and Mandalay Region to the east, Mandalay Region and Magway Region to the south, with the Ayeyarwady River forming a greater part of its eastern and also southern boundary, and Chin State and India to the west. The region has an area of 93,527 km2. In 1996, it had a population of over 5,300,000 while its population in 2012 was 6,600,000. The urban population in 2012 was 1,230,000 and the rural population was 5,360,000. The capital city of Sagaing Region is Monywa.

The educational system of Myanmar is operated by the government Ministry of Education. Universities and professional institutes from upper Burma and lower Burma are run by two separate entities, the Departments of Higher Education, whose office headquarters are in Yangon and Mandalay respectively. The education system is based on the United Kingdom's system, due to nearly a century of British and Christian presences in Burma. "The first Government high school was founded by the British colonial administration in 1874. Two years later, this Government High School was upgraded and became University College, Rangoon." Nearly all schools are government-operated, but recently, there has been an increase in privately funded schools. In Myanmar, schooling is compulsory until the end of elementary school, probably about 9 years old. However the international standard for schooling is 15 to 16 years old. 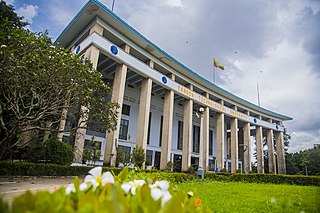 The National University of Arts and Culture, Yangon is a public university, located in Yangon, Myanmar, that offers bachelor's and post-graduate degree programs in traditional Burmese performing and visual arts. The university's primary language of instruction is in English, and it accepts interested foreign students.

Yezin Agricultural University (YAU), located in Yezin, is the only institution of higher learning in agriculture in Myanmar. YAU also has major campuses in Mawlamyine and Hlegu, as well as five smaller regional campuses in Aungpan, Hmawbi, Kyaukse, Magway and Phyu. The Ministry of Agriculture, Livestock and Irrigation administered university offers primarily a four-year Bachelor of Agricultural Science (BAgrSc) program in addition to small master's and doctorate programs. Starting from the 2009 academic year, third-year and fourth-year undergraduate students have to select one crop as a specialized subject and study off campus at one of seven designated farms of the Myanmar Agricultural Service. YAU produces more than 200 graduates both for bachelor and postgraduates each year. The university has already produced more than 9000 bachelor's degree holders together with numbers of postgraduate degrees up to 2012.

The Yangon University of Education, located in Kamayut, Yangon, is the premier university of education in Myanmar. Primarily a teacher training college, the institute offers bachelor's, master's and doctoral degree programs in education to the country's prospective primary, secondary and tertiary school teachers. Its training high school known as TTC is considered one of the best high schools in the country.

Mandalay Technological University (MTU), in Patheingyi, Mandalay, is one of senior engineering universities in Myanmar. The university offers undergraduate, and postgraduate programmes in engineering disciplines to students. It maintains an annual undergrad student intake of around 300~350.

The University of Computer Studies, Mandalay (UCSM), located in Mandalay, is a Myanmar IT and computer science university. UCSM offers bachelor's, master's and doctoral degree programs in computer science and technology. The majority of its student body is from Upper Myanmar. Administered by the Ministry of Education, UCSM is the official university for all the Government Computer Colleges in Upper Myanmar, whose students may continue their advanced studies at UCSM. 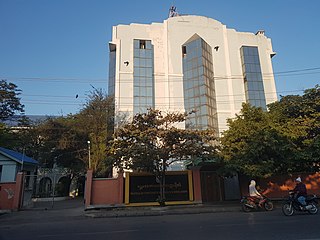 The National University of Art and Culture, Mandalay,, located in Patheingyi, Mandalay, is one of two performing and visual arts universities in Myanmar. The university offers bachelor's degree programs in traditional Burmese performing and visual arts. Qualified students may continue post-graduate studies at the University of Culture, Yangon. The university's primary language of instruction is in English, and it accepts foreign students.

Pyay Technological University (PTU), in Pyay, is one of three senior engineering universities in Myanmar. It offers bachelor's and master's degree programs in architecture and engineering disciplines. The university draws most of its student body from Lower Myanmar, outside Yangon Division. 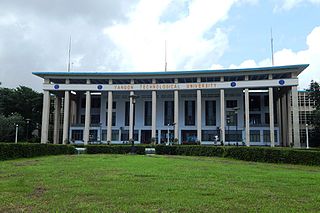 The University Entrance Examination or Matriculation Examination is an academic examination administered to 10th standard students at all schools in Myanmar, including government schools, comprehensive schools and private boarding schools, for students seeking university admission. The test is administered at least 3 weeks after the Basic Education High School Examination. Test results determine the eligibility of high school students to pursue higher education, and their entrance into select universities and majors.